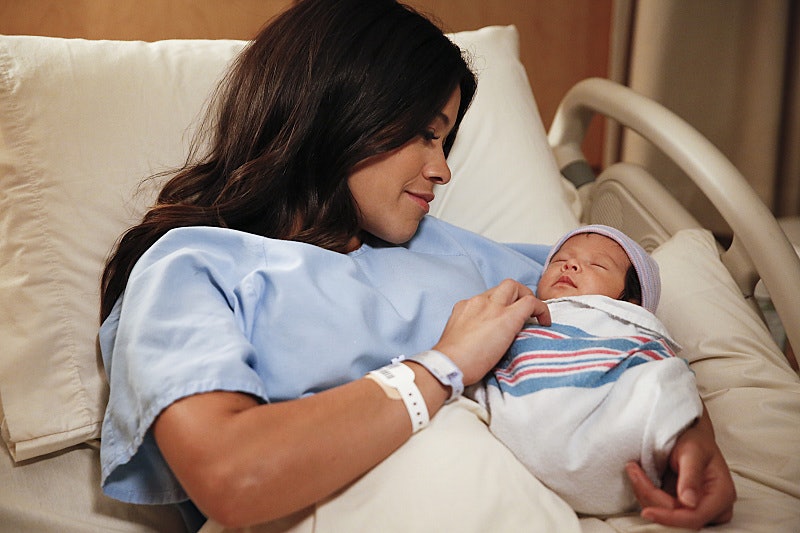 As the Season 1 finale of Jane the Virgin reminded us fans, the show has been a roller coaster of emotions from the day it premiered. But despite all of the ups and downs, our friendly (and helpful) narrator said Jane's heart was full when she gave birth to a baby boy on Jane the Virgin. Jane was convinced she was having a girl, so naturally I expected her to give birth to a boy. Although Xo, Alba, and Jane may not know how to raise a boy, the teary-eyed proud papa Rafael said he would help with any questions.

The baby — whose full name is Mateo Gloriano Rogelio Solano Villanueva — is named after Jane's grandfather, a male version of her middle name, her father's name, the baby's dad's last name, and her last name. But like Rogelio said, we'll see how the nicknames organically develop as the child grows up. And it was easy to see why Jane was instantly in love with her beautiful son. Even the narrator was moved and said, "I'm not much of a baby person, but that is one cute kid."

Not only did Jane have the first boy in awhile in the Villanueva family, her labor was also longer than her mom's labor with her. But that was actually for the best, since Xo and Rogelio were in Las Vegas when Jane's contractions started. I wasn't confident that Xo would see her grandson born, but Rafael let go of his jealousy with Michael to arrange a police escort for Xo and Rogelio from the airport. Xo was able to cheer on Jane in her final moments of labor, repeating what Alba had said to her 24 years ago: "Five more minutes of pain for a lifetime of happiness." And then added her own sassy spin, "So push or I'll yank out that kid myself." (And hey! Xo is a newlywed too now thanks to her drunken Vegas marriage to Rogelio. So the new grandparents have a lot of celebrating to do.)

I imagine nothing can prepare you for child birth, but throughout Jane's pregnancy she has been (in the words of Rogelio) #blessed to have a such a support group and Rafael, Xo, Alba, Rogelio, and Michael all were there for her before and after labor. Unfortunately, Jane's tender moments with her baby were short-lived, and she'll need that support group more than ever once she discovers her child was taken by Sin Rostro. But we'll have to wait to see how that goes down until Season 2.