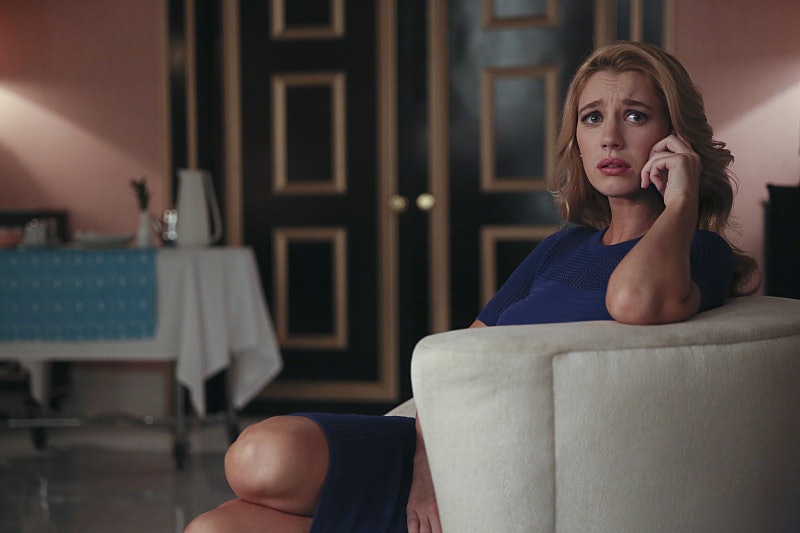 One of the major questions that was on fans' minds throughout the summer hiatus was whether or not Petra would before pregnant with Rafael's baby when the series returned. (If you recall, she was recently gifted with a container-full of his lost sperm from the sperm bank.) And thankfully, the Jane the Virgin Season 2 premiere made sure to answer that very intriguing question by the end of the hour. Though she felt somewhat conflicted at the beginning — and by that I mean the con side of her list significantly outweighed the pro side — in the end, Petra decided to artificially inseminate herself via a turkey baster. (Anyone else going to seriously think twice before digging into that Thanksgiving turkey this year?)

Of course, that doesn't necessarily mean that she will get pregnant. These things are never an outright guarantee. But, come on, we know it has to happen at this point. Otherwise, what was the point of introducing this particular story arc? Petra is going to become pregnant and open up a whole new can of drama in regards to this already complicated love rhombus between Rafael, Jane, Michael, and Petra. Not that I'm complaining about this change of events. I've pretty much always declared myself as being Team Michael right from the start, and given the chemistry that I witnessed between the formerly engaged couple throughout the premiere, I'd say their could be a reconciliation in their near future. And Petra's pregnancy will just bring us one step closer to seeing that happen.

But I'm getting a little too ahead of myself here. Let's just look at this from Petra's point of view. This decision is huge in regards to her character development. Throughout Season 1, she hit highs and lows in the morality department. She constantly teeters on the edge of being both good and bad. But when push came to shove, her feelings for Rafael got the better of her and she made the decision to change everyone's lives for her own personal gain — not because she necessarily wants to be a mother, but because she just wants to get back the guy she loves.

Is she actually harming anyone on a physical level? No. But that doesn't mean that she still isn't committing an actual crime. I mean, she basically abducted sperm without the owner's permission and because of that, a ton of drama is about to unfold. And while a big part of me knows that she's very much in the wrong, I secretly can't wait to see how this storyline develops. Let's hope Rafael is ready to pull double daddy duty.

More like this
Everything To Know About The Flash Season 9
By Brad Witter
20 Photos Of "Beefy" Jeremy Allen White To Tempt You To Watch 'The Bear'
By Radhika Menon
What Is the Net Worth Of Each 'Stranger Things' Season 4 Cast Member?
By Hugh McIntyre
Who Is 'Stranger Things 4' Fan-Favorite Joseph Quinn Dating IRL?
By Grace Wehniainen
Get Even More From Bustle — Sign Up For The Newsletter