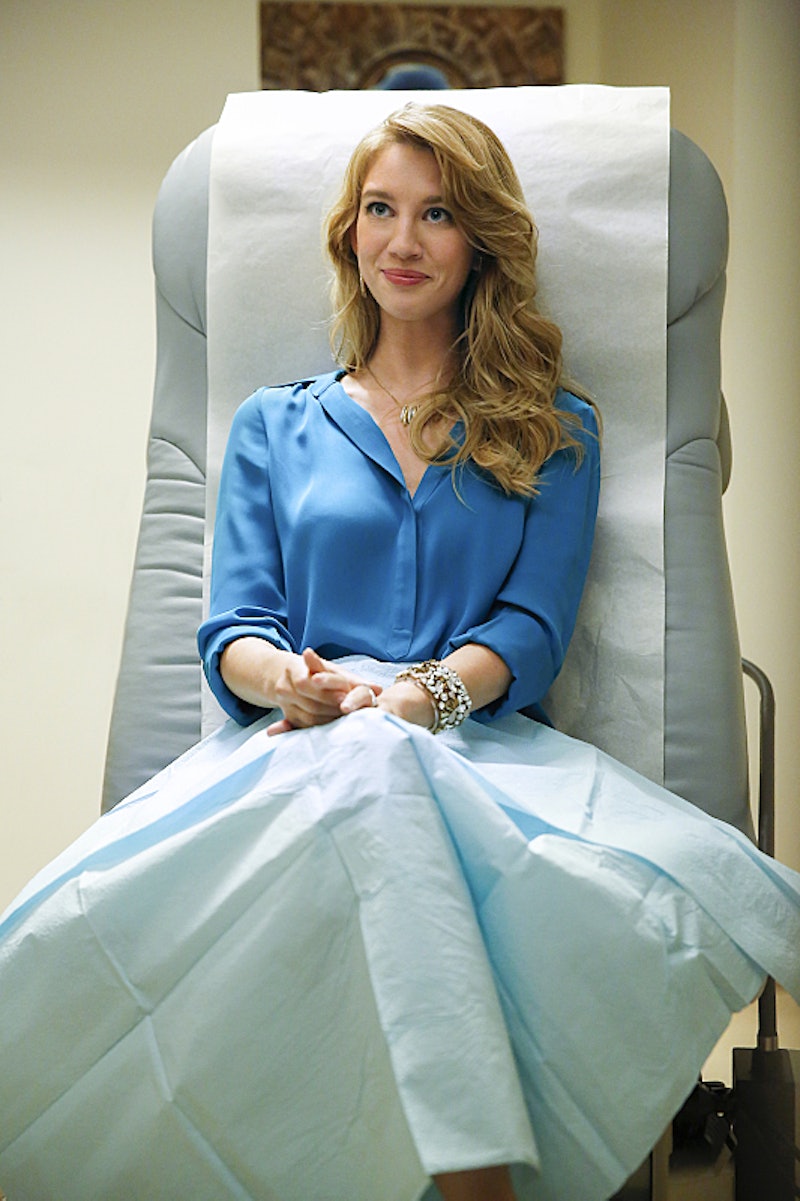 If any character on TV right now deserves to be called "complex," it's Petra from Jane the Virgin. Viewers have seen her evolve over the course of the series, but her arc certainly wasn't one fluid curve. With every episode, we watched Rafael's now ex-wife deviate from bad to good and back again, and in the Season 1 finale, she took things to a whole new level. Just moments after earning our sympathy when she overheard Rafael talk about his attempts to manipulate her out of his life, Petra went to a fertility clinic that had just called her, where she found out that Rafael's sperm sample was actually split in two. When the woman who ran the center offered to continued storing it, Petra declined and insisted on taking it herself. Does this mean what I think it does? Is Petra going to have a baby with Rafael, without his knowledge or consent?

It's actually impossible to predict, because like I said, Petra has crossed the line between friend and foe over and over again on Jane the Virgin.What she does with Rafael's sample may really depend on how she feels about him in the coming days. Sure, his comments about wanting her out of his life pissed her off — enough to make her keep this bombshell from him — but she might calm down and change her mind. Of course, we shouldn't forget that Petra is also still in love with Rafael, and she could inseminate herself not as part of some grand evil scheme to get revenge, but in an attempt to rekindle their relationship.

It was just last week that Petra reminded Jane that not too long ago, Petra and Rafael were in love. Yes, the day Jane was accidentally inseminated, Petra was attempting to use Rafael's sample without his knowledge in attempt to save their marriage. But flashbacks have shown that at some point before that, Petra was pregnant and excitedly preparing for the baby with Rafael until she suffered a miscarriage.

So there is a lot more at play here than revenge and manipulation. Amidst all of the #TeamMichael vs. #TeamRafael drama and various Jane 'ships, we may have lost sight of Petra's own feelings. While she can be manipulative and not always do the right thing, she's human, in love, and feeling desperate. If Petra does choose to use this secret sample, it would be wrong, but it shouldn't be mistaken as something solely meant to hurt Rafael or Jane. Petra might be viewing this as one last chance at a happy ending with Rafael, because for as many fantasies as Jane has dreamed up, I'm sure Petra has a few of her own.

More like this
Here’s Who Victor Chooses In The ‘Love, Victor’ Season 3 Finale
By Brad Witter
Who Could Die In The Stranger Things Season 4 Finale?
By Kadin Burnett
The Umbrella Academy Cast Breaks Down That Wild Season 3 Finale
By Gretchen Smail
Here's Why You'll See Less Of Olivia Rodrigo In 'HSMTMTS' Season 3
By Bustle Editors
Get Even More From Bustle — Sign Up For The Newsletter