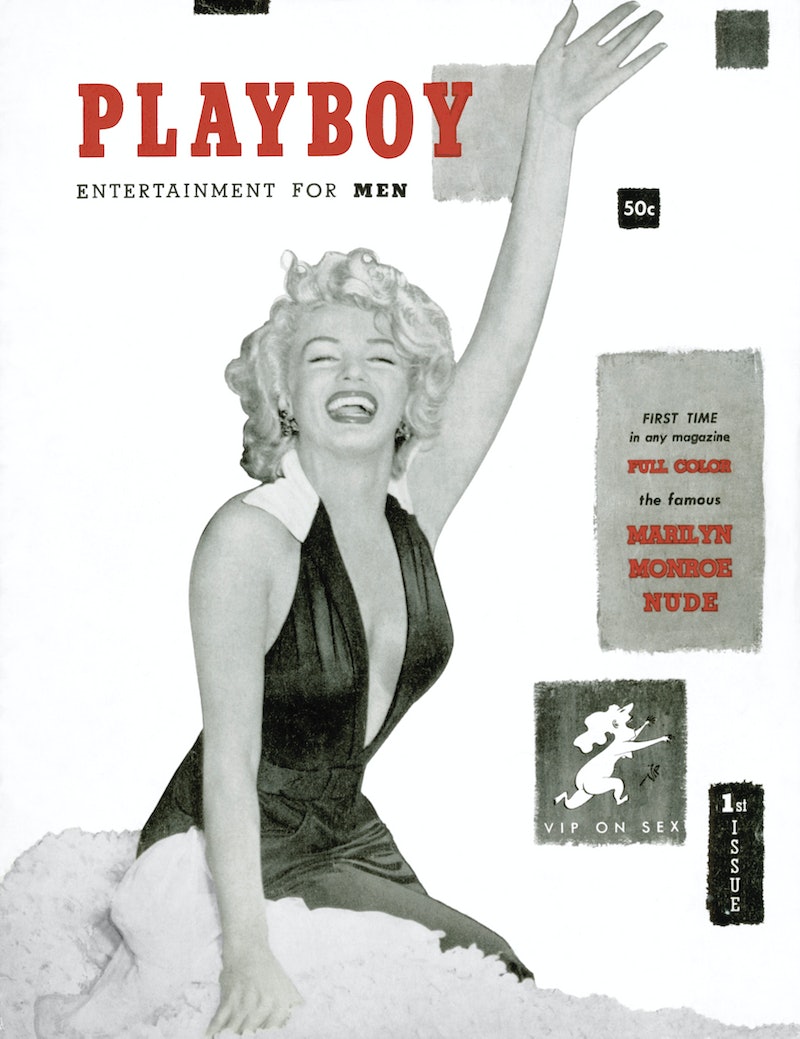 On Monday night, Playboy shocked the nation when it announced that it would no longer publish full female nudity. But is Playboy dropping nudes feminist? Since its creation in the 1950s, the iconic magazine has become synonymous with titillation and (straight male) masturbatory fodder — on the surface, it seems obvious that the decision to no longer publish female nudes is a major blow to mainstream female objectification, which simply must be a feminist act. Right?

As always, though, the answer is more complex than it appears at first glance. Whatever the implications, the move appears to stem primarily from business-related reasons, rather than ideological ones. According to CNN Money, Playboy circulation is currently down to 800,000 — a far cry from the millions of subscribers it had in its glory days. So what's changed? Here's a hint: It's the same thing that's changed pretty much everything else in the past two decades.

If you guessed "the Internet," you're absolutely right. Chief executive Scott Flanders told the New York Times that the ubiquity of modern pornography has taken a toll on the decades-old provider of sexy-yet-classy nudes. "You're now one click away from every sex act imaginable for free. It's just passé at this juncture," Flanders said.

Basically, it's a response to a lack of demand, not necessarily a feminist statement by the company. The question, then, becomes this: Whatever the motives behind the decision, is it still feminist? Buckle in, y'all, because here's where it starts to get complicated.

Historically, Playboy has been a curious mix of old-school female objectification and surprisingly progressive attitudes. In 1955, Hugh Hefner made waves when he agreed to publish "The Crooked Man," a short story about a straight man living in a world where heterosexuality was oppressed. In response to the criticism, he stated, "If it was wrong to persecute heterosexuals in a homosexual society then the reverse was wrong, too." It's a common attitude today, but championing gay rights was nigh-unheard of in the 1950s. Furthermore, during Christie Hefner's time as CEO from 1988 to 2009, a startling 40 percent of the company's executive team was comprised of women. Considering that there are more CEOs named John in the world than there are women CEOs of any name, this is a pretty notable achievement.

Of course, none of this excuses the fact that publications like Playboy participate in, and perpetuate, the portrayal of the female body as an instrument for (straight male) sexual pleasure — under the guise of "appreciating the female form," natch (not to mention the perpetuation of thin, large breasted women as the physical ideal). But this combined with Playboy's history of progressiveness could be an indication that the decision is twofold: Yes, it seems to be a primarily business decision, but there's also a chance that they're taking current feminist attitudes into account. "Playboy has been a friend to nudity, and nudity has been a friend to Playboy, for decades. The short answer is: times change," Playboy staff wrote on its website.

In fact, the website has recently shown surprisingly feminist undertones — I still regularly refer people to their "Should You Catcall Her?" flowchart, and in the wake of a bout of celebrity photo hacks last year, they published an article instructing readers not to look at nude photos of women without their consent. Could these articles be disingenuous attempts to capitalize on the feminist movement while also publishing content that perpetuates the oppression of women? Of course. However, there's a chance that men who would otherwise ignore feminist ideals when discussed by women will take it more seriously after reading about it in Playboy.

Does that kind of make you do this?

I understand. It's infuriating that men so frequently need another man to tell them what women have been telling them all along in order for them to take it seriously. Feminism can use all the help it can get, though, and the fact that Playboy has become an ally is encouraging.

In fact, this is where Playboy's decision to drop nudes could do the most good. The magazine has long been held up as "thinking man's" pornography — while other publications like Penthouse are written off as mere masturbatory fodder, Playboy has a history of publishing award-winning short stories (many of which are written by female authors), longform articles, and other hallmarks of more "legitimate" magazines. Considering that the magazine has inspired countless other publications over the years, it's reasonable to assume that its influence will remain constant. In short, other magazines may see the success of Playboy without full female nudity and choose to follow suit.

Of course, just to complicate matters even further, there's also this: To claim that dropping female nudity is a feminist act implies that female nudity isn't feminist. Obviously this is not the case; nudity can be extremely feminist, as long as it's undertaken with consent. Furthermore, to say that it is not ignores the choices of women who choose to benefit from the male gaze. Who are we to tell women what they can and cannot do with their bodies?

The objectification of women's bodies isn't going anywhere anytime soon, but there's no denying that Playboy's decision could be indicative of a larger trend away from magazines that rely on female nudity to sell copies. I don't know about you, but I'd say that's a huge step forward... for now.