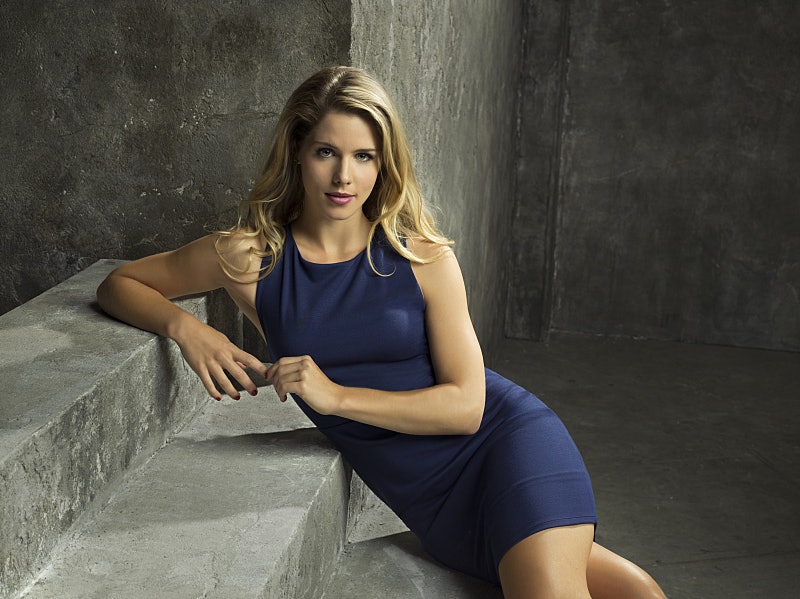 There's no denying that the Arrow Season 4 premiere was chock-full of interesting new plot developments. Oliver has officially suited up as the Green Arrow; Damien Darhk is preparing to destroy Star City (apparently with Lance's help); and Team Olicity has never been happier. But if you thought this road down Happily Ever After Boulevard was going to last, then you were dead wrong. (The key word there being "dead.") In the final few moments of the premiere, Arrow introduced a flash forward scene six months into the future, which found Oliver standing over someone's grave. And while we don't see a name written on the tombstone, I'm growing more and more concerned that Arrow plans on killing off Felicity Smoak by the end of the season.

What makes me even think such a terrible thing could come to pass? Well, for starters, there's the fact that The Flash's Barry Allen shows up at the cemetery as well and apologizes to Oliver for missing the funeral. We know how close Barry and Felicity were, so it stems to reason that he would want to be there if something were to happen to her. Would he still show up for Diggle or Thea? Maybe. But something tells me that his presence here could be much more personal than just common courtesy and may spell out a very grim fate for our beloved tech girl. Or maybe it's all one big red herring? (Please?)

Executive producers Marc Guggenheim and Wendy Mericle recently sat down with Entertainment Weekly to discuss the pivotal scene in question and revealed that, unfortunately, whoever is buried six feet under will be gone for keeps. "It’s not a fake-out,” Guggenheim told the site. However, it seems as though even they have yet to decide which character will be the one to meet their maker. "We don’t necessarily know who it is right now," Mericle explained. "We’re still figuring the plan out for the season, but we wanted to have resonance."

And before you start thinking that the Lazarus Pit could somehow save the day (like it eventually will for the resurrection of Sara Lance), then prepare to be gravely disappointed because whoever is dead really will stay that way. "We want to bring stakes back to the show,” Mericle stated. "We will be finding a way to handle the Lazarus Pit portion of Season 3 in Season 4 in a new, inventive way that I can’t reveal."

So with all that in mind, the series simply can't kill off Felicity, right? I mean, if there's absolutely no way for this mystery character to come back, she's certainly one of the core roles this show can't afford to lose. Not only is she one-half of Arrow's biggest and most beloved 'ship, but she's a key player in the Team Arrow dynamic. They would be nowhere without her savvy tech skills. So even amid all of the evidence that seems to be stacked against her, I have to believe that the show has a bigger (and better) fate in store for Ms. Smoak. Even the producers themselves aren't sure who to kill off, which means our girl still has a fighting chance.

Of course, it will be hard to lose anyone on this series, but Felicity's death would be a blow I'm not sure that Arrow could bounce back from. So, come on, writers — do not fail this series, and keep Felicity safe and sound where she belongs.