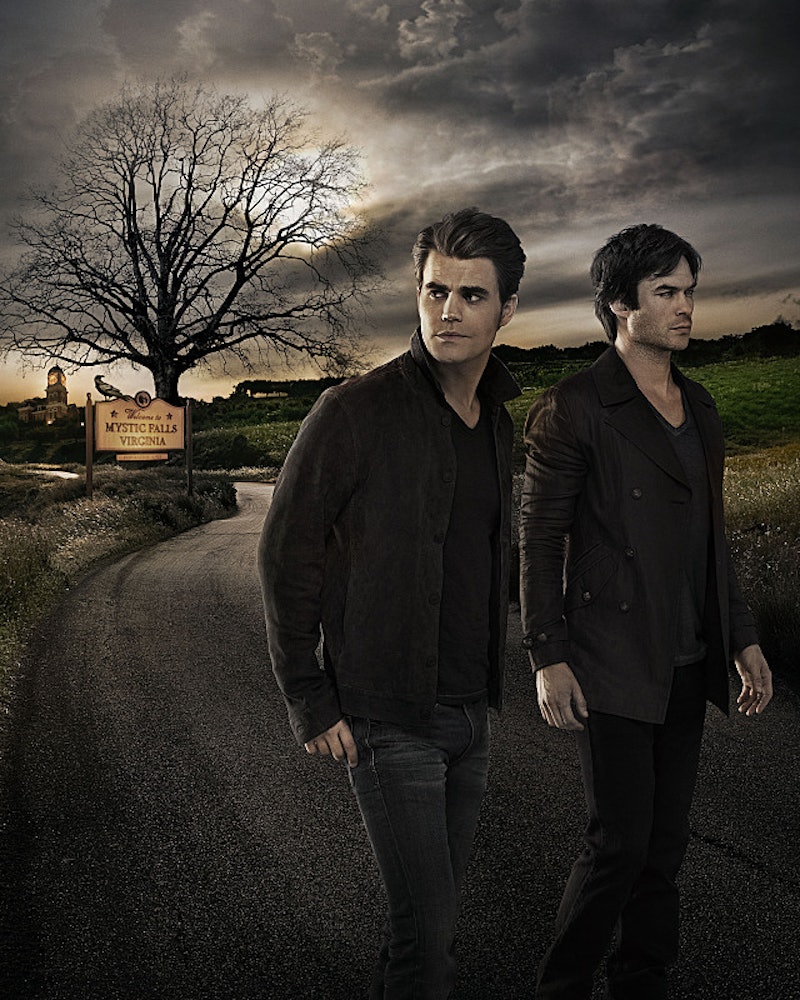 Even since the show debuted, The Vampire Diaries has always prided itself on its various flashback sequences. Not only has this allowed viewers to see their beloved Salvatore brothers in some truly spectacular attire, but it also offered up insight into their rich history as both humans and immortals. But now — in what can only be described as a How To Get Away With Murder-type twist — TVD Season 7 is incorporating a three-year flash forward concept into each episode, so we can see what kind of future lies in store for our Mystic Falls characters. And given what we witnessed throughout the premiere — what with Damon and Stefan being chased by an unknown assailant — things are looking pretty bleak indeed for our dear Salvatore boys.

In the brief glimpses that we saw, Future Stefan awoke Future Damon from his desiccated slumber, informing him that "she's back." And by "she," he means an arrow-wielding enemy who seems hellbent on killing both of them. And while her appearance is mostly shrouded in shadows, this mystery woman is definitely somebody that Damon and Stefan have encountered before, at least at some point within the three-year time gap. But is she a brand new villain or a beloved character that has somehow turned bad? Right now it's hard to say, especially since we haven't gotten a good look at her yet. However, I can't help but notice that her blonde hair looks a little familiar.

Call me crazy, but could this be Caroline that's after them? The build and hair color certainly seem to match, but I'm at a loss of knowing what exactly her motives would be. Back in the present day, she's just been taken hostage by the Heretics thanks to Enzo's betrayal (low blow, dude), so it's possible that they end up doing something to her that alters her allegiance. They are half-witch after all and perfectly capable of messing with a vampire's mind.

That being said, there is one major flaw to my theory, which begins and ends with the scar we see on Stefan's chest. That marking has also been featured on Heretic Beau earlier on in the episode. (Apparently, the wound reopens whenever this person is near.) So considering how old Beau is, there's no way it could've come from Caroline, which means there could be a brand new villain about to come into play.

But if this really is a character we don't already know, then what was the point of covering her face in shadows? This type of dramatic effect is usually only called upon when the viewers already know the person in question. So maybe she's being possessed by the spirit of an ancient villain? Or perhaps this is something that can be passed down through the generations, much like the vampire hunters. Either way, I wouldn't completely rule Caroline out of the running, especially since her main target is Stefan. "She's not going to stop until you're dead," Damon told his brother.

To this girl, the hunt is personal. And the only way to provoke such a strong reaction like that is if these two share a little history together. So as much as I hate the thought of Steroline coming to blows (and just when they were so close to being happy together), I can't help but shake the feeling that Caroline is the woman behind the arrow. Let's hope my theory is way off the mark.