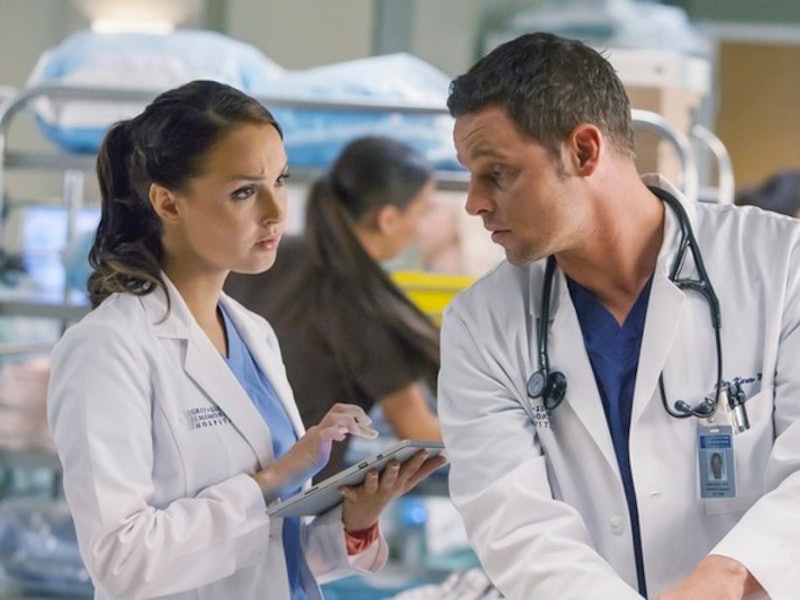 There's no show out there that knows how to deliver a one-two punch right in the feels quite like ABC's hit medical drama Grey's Anatomy . I may not have a license to practice medicine and my Ph.D might be nonexistent, but man do I find these doctors extremely relatable. But therein lies the beauty of any Shonda Rhimes show. You become so invested in these characters' lives that checking in with them every week is no longer optional. It's necessary. When they hurt, you hurt. When they experience joy, so do you. And when they consider making a huge life decision, then you're right there with them. Such is the case regarding Alex and Jo's recent discussion about having a baby on Grey's Anatomy.

You see, after discovering that Izzie had made the decision to freeze her eggs so that she and Alex could still have children, Jo became concerned that her own relationship with Alex wasn't really going anywhere. If he wanted to have kids with Izzie, then why doesn't he seem to want to have them with her? Does this mean he doesn't love her as much as his ex-wife? These are all of the things that were buzzing through Jo's head throughout the hour. And even though it felt a little uncharacteristic of Jo to feel so insecure, she did present some valid points.

As much as Alex and Jo are clearly in love, they rarely talk about the future of their relationship in any sort of serious capacity, which made the surprise baby talk feel all the more poignant. In fact, for a brief moment I felt a little worried that this could spell the beginning of the end to their romantic relationship. Thankfully, though, these two proved that they can overcome even the biggest of hurtles. They were able to openly discuss their feelings and even contemplate a growing interest in becoming parents. Heck, Alex took a step farther by suggesting that they start trying to get pregnant immediately. And even though Jo playfully laughed off the remark, claiming that neither of them were quite ready yet, I can't help but wonder if that story arc is on the horizon for this dynamic duo.

With the exception of Meredith, Alex has arguably experienced more hardships in the love department than anyone else on the series. Between the whole Ava thing and Izzie's disappearing act, this guy has gotten his heart stomped on time and time again, so it'd be nice to see him finally settle down and get the family he's always secretly wanted — one that will never leave him. Alex is a natural with kids and would make a fantastic father. So let's hope Grey's decides to give him the happy ending he oh-so deserves. You could say that a baby is jus what the doctor ordered.

More like this
We Finally Know When 'Grey’s Anatomy' Is Coming Back
By Brad Witter
The ‘Love, Victor’ Showrunner Gave Fans Hope For A Possible Spinoff
By Brad Witter
Legacies Showrunner Said There Is Still Hope For More Vampire Diaries
By Gretchen Smail
The Umbrella Academy Cast Breaks Down That Wild Season 3 Finale
By Gretchen Smail
Get Even More From Bustle — Sign Up For The Newsletter