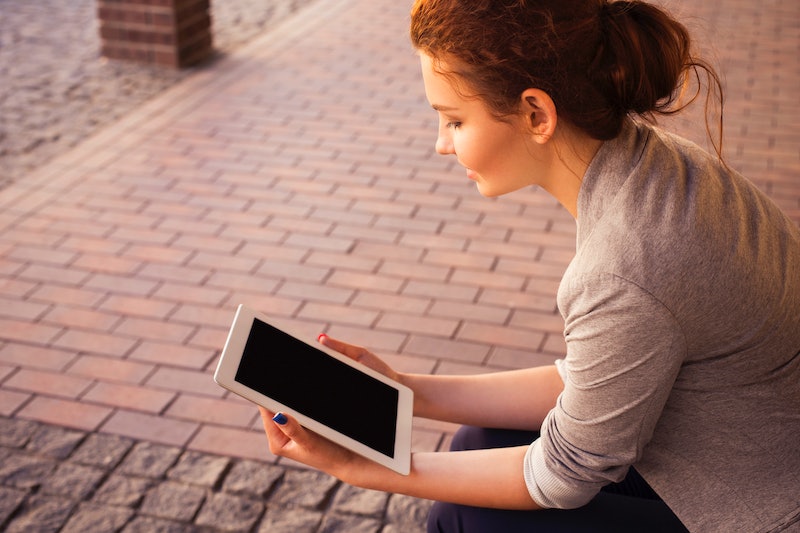 If you use dating apps and haven't come across a total creep, consider yourself lucky — you're an anomaly. Because of the anonymity we're afforded online, tons of guys (and girls!) take it upon themselves to act like total d-bags, because there aren't any real-world consequences for, say, telling a girl on Tinder she has "nice side boob" instead of just saying "hi" like a respectful, functioning human. As such, there are many online dating red flags to watch out for, and author Lauren Urasek outlines the most common in her new book, Popular.

Popular: The Ups and Downs of Online Dating from the Most Popular Girls in New York Cityby Lauren Urasek , $11, Amazon

Urasek, a 25-year-old New York City resident, led a seemingly normal life, until New York magazine proclaimed her "New York City's most popular girl on OkCupid" in 2014... thus turning her mostly average world into a veritable media circus. She said she was even offered a reality TV show, but settled for a book deal, and we're so lucky she did: Popular is a hilarious collection of her craziest online dating anecdotes and time-tested wisdom.

Per her book, we're offered a glimpse into the darker side of online dating, and, for those of us who've been in her shoes, it's refreshingly relatable to know that other women deal with the same B.S. day after day. Despite her "popularity," Urasek feels just like any other online dater, and has had more than her fair share of awful experiences. Here are seven red flags that she's come to associate with negative results (and I've thrown in some of my own, too). Do yourself a favor and heed our warnings.

Popular: The Ups and Downs of Online Dating from the Most Popular Girls in New York Cityby Lauren Urasek , $11, Amazon

1. Any Mention Of Exes

Okay, come on people. Talking about an ex on a first date (or, you know, ever) is possibly the most obvious red flag ever. As Urasek says, "Nobody wants to hear intimate details about a guy's sordid romantic past," and mentioning an ex on your profile or talking about her (or, worse, them) on a date basically screams "I'm not over it!" If the past is truly the past, leave it there — your date will thank you for it.

Reading Urasek's spot-on description of the supposedly "adult men" in places like NYC and LA was very validating — I've met men online of all ages, and they *always* seem to have an issue with commitment. Peter Pan Syndrome is exactly what it sounds like: A manchild who refuses to grow the hell up. Sure, it could be a byproduct of the big city hustle and bustle, or the "hookup culture" plaguing America, but that doesn't mean it's not frustrating as hell to continue to date commitment-phobes. Some tell-tale signs of this, according to Urasek: "If he's never (or rarely) been in a relationship; chronically seeks "casual sex" or "short-term dating;" moves around a ton and never seems to settle in one place for more than a year; has no interest in marriage, kids, or home ownership; or has an annoying young-person job at a flashy tech startup, beware."

This scenario, unfortunately, probably sounds all too familiar: You're seeing someone new, and things go great when you're together, but in the days in between dates, he or she totally vanishes — no calls, no texts, no Snapchats. This isn't quite the same as ghosting, because he or she will come back, but only when they want to "hang out" again. Sure, you could make excuses for them and how "busy" they are, but Urasek points out the bottom line: If someone isn't willing to put in the legwork and acknowledge your existence daily, chances are that he or she is only in it for the, ahem, physical benefits.

There's nothing less sexy than going out with someone who treats other people — be them waiters, homeless people, cab drivers, you name it — with anything less than civility and respect. As Urasek points out, it's not hard to treat people like human beings, and even living in a city as notoriously "rude" as NYC doesn't make it okay to act like an asshole. If your date is a jerk to strangers, even if he or she is perfectly polite to you, that's a huge red flag, and speaks volumes about their true character.

5. Aversion To Meeting Your Friends

This one is tricky, because it's not as if you're going to introduce someone to your BFFs on the first date. But if you met someone online and have been seeing them for a couple months, it's natural to want him or her to be more integrated into your social circles. Because of the fast-paced, "on to the next one" mentality omnipresent in online dating, someone who seems unwilling to meet your friends (or introduce you to theirs) may be subconsciously checked out of the relationship — a serious red flag that things won't progress any further.

You see this all the time on dating profiles: Someone, in a "joking" manner, pokes fun at their ex, calling her "crazy" and saying that he is looking for someone sane this time around. Without going into too much detail, the "emotional women are crazy" trope is offensive and, frankly, misogynistic at heart. While Urasek warns against guys who disrespect their exes by calling them crazy, I'll take it a step further: Beware of a guy who seems to think the word "crazy" is an appropriate label for any woman who is merely "exhibiting emotion," as all humans do.

7. Inability To Admit Being Wrong

Ugh. People who simply cannot admit when they're in the wrong is the most frustrating thing in the world. A partner like that will make any and all arguments hellish, to say the least. Being a mature adult means knowing that it's OK to be wrong, and being willing to compromise with a partner when you are. Not to mention, that sort of attitude is a red flag of bigger personality issues, as Urasek notes: "That kind of stubbornness, to me, also connotes arrogance, self-importance, defensiveness, and a lack of generosity."

More like this
Are Gemini & Leo Compatible In A Relationship?
By Kristine Fellizar
The 3 Dating Apps Queer Women & Nonbinary Folks Actually Like
By Emma Carey
What Are Swingers? Everything You Need To Know
By Lexi Inks
TikTok’s Viral “Rating Game” Is Exposing Everyone’s Icks
By Courtney Young
Get Even More From Bustle — Sign Up For The Newsletter