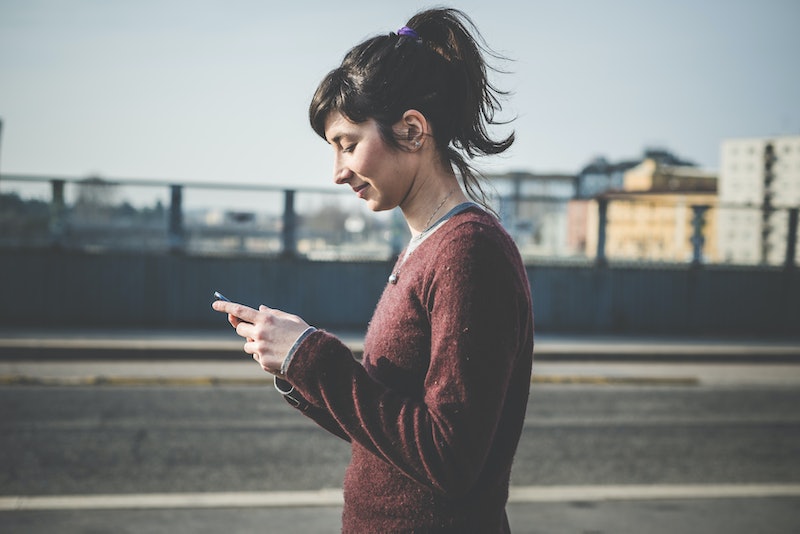 The year is 2015, so our collective attachment to our phones is nothing we should be ashamed of at all. Whether we hate it or embrace it, technology has changed how we do just about everything, including dating. There's hardly a single millennial alive who isn't an avid user of dating apps: They're a fast and easy way to meet hundreds of potential partners, or just an extremely effective method of procrastination. But for all its benefits, there are also a lot of bad things about online dating.

In my four years of online dating (oh wow), I've had plenty of ups and downs. I've met some great people, as well as some serious jerks. I've talked and written about online dating so much that I was once called an "authority on online dating" (seriously). The most discussed part of online dating is undoubtedly the insane, funny, or creepy messages people get, but there are a lot more aspects of online dating that deserve some recognition, too.

Whether you're a newcomer to the world of online dating or a veteran like myself, here are seven things that often get left out of conversations about apps like OkCupid and Tinder — I don't mean to scare you off, but you should be aware that online dating isn't all love-at-first-sight (or awesome casual sex).

This will not come as a shock to anyone as entrenched in the online dating world as me, but it seems people rarely talk about the fact that actively using dating apps is hard effing work. Sure, it's a convenient way to meet people you might normally not, but it's also a huge time-suck, especially if you use sites like OkCupid and Match, where you have to make and maintain a lengthy profile. I can't even quantify how many hours per week I spend on OkCupid, answering match questions, browsing profiles, and messaging an array of men. Great for boredom, terrible for day-to-day productivity.

With online dating, everything seems to move at warp speed. Compared to the relatively snail-like pace of meeting someone IRL, getting to know them, becoming friends, and then maybe going on a date, the way things work online is crazy-fast. Here's a breakdown of how things might typically go in a given three-hour period I spend on a dating app: I learn someone exists, make small talk, ask a few personal get-to-know-you questions, flirt (with varying levels of subtlety), exchange numbers, and ask him out. If you're someone who needs time to move into anything romantic, you might experience some culture shock when you start online dating.

This is a direct result of the aforementioned fast pace intrinsic to online dating. If you hit it off with someone immediately, it can be easy to get over-excited about your romantic future, which can lead to feelings developing at an abnormal pace. Though this isn't true for everyone, I know that I've been an inappropriate level of 'heartbroken' after things ended with someone I'd really only known for a few weeks, strictly because of the accelerated nature of the relationship. It may seem like the two of you are on the path to love, but real intimacy takes tons of time and trust to build, so be cautious of falling for someone too quickly (as I have done on countless occasions).

The unfortunate (and unnecessary) stigma surrounding STIs mixed with the fast and often casual nature of online dating is not a good combination. Though there's nothing wrong with sleeping with someone quickly or having casual sex, STIs can be an awkward, difficult thing to discuss with someone you know well, let alone with someone you just met. If you're not comfortable discussing sexual health issues with someone, it can lead to bad decisions and potential health risks. There has been more than one study that blames the spike in STI rates on dating apps. The good news? All you need to do is commit yourself to having open, honest conversations with each new sex partner before putting your health or theirs at risk. If you have an STI and want to date within a more understanding community of peers, there's even a dating service specifically for people who have STIs, because everyone deserves to find love (and having an STI does not make you undateable).

It's an over-generalization to say that everyone online is terrified to commit, but it can be a common side effect to having such a bevy of options at all times. Someone could say they're looking for something serious, but there's really no way to know for sure, and sometimes emotions might already be involved before you find out (too late) that they thought of you as a hookup buddy rather than a real significant other. I'm not suggesting everyone on Tinder is intentionally deceptive; it's just an unfortunate reality that online dating often attracts hordes of people who want a quick lay, and will lie about their intentions to get it. Even if someone genuinely does want a relationship, he or she could easily get distracted by the multiple people knocking at their metaphorical door. It's a tricky situation; proceed with caution.

Disclaimer: I am not saying that all men on dating apps are sexist, or that women can't also exhibit their fair share of sexism. But if I had a dollar for every time I read something like "if you don't look like your pictures, you're buying my drinks until you do," I could probably get Sallie Mae to stop calling me every five minutes. Even if someone isn't outright sexist, online dating nevertheless breeds a sense of entitlement, and people seem to have very high demands regarding what they're looking for in a partner. It can be exhausting to read through someone's profile and develop a crush on them, only to discover in their match questions that they think women who've slept with a lot of men are "sluts." Yuck.

OK, Catfish may be a popular TV show, but most people don't think this could ever actually happen to them IRL. It's often talked about in a funny, "haha that's so crazy" way, but the reality is that — and I don't mean to sound dramatic — there are real weirdos and predators out there. From scams to get your money to people posing as someone else for attention, catfishing does happen, and you should always be on your guard. Don't be afraid to Google stalk — if you want to meet someone, it's your right to actually confirm their existence before hanging out (or even chatting) with them.

More like this
Hinge's New NFAQ Feature Is Demystifying Queer Dating
By Emma Carey
The Best Time To Date After A Breakup, According To Experts
By Bustle Editors
Are Virgo & Capricorn Compatible In A Relationship?
By Kristine Fellizar
Virgo & Sagittarius Zodiac Compatibility, According To Astrologers
By Kristine Fellizar
Get Even More From Bustle — Sign Up For The Newsletter