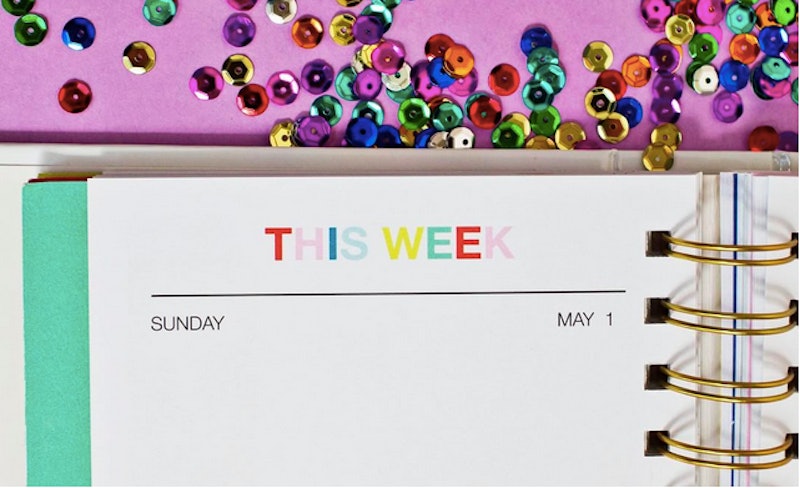 Sometimes you have a day where you're really, really not feeling it. On days like those you need tricks in your back pocket for staying motivated even when you want to quit. While it can be tempting to throw your hands in the air and just go and watch that Simpsons marathon, not everyone has the luxury to do that. There are deadlines to consider, jobs at stake, or people counting on you. You have to keep plugging along. And even if nothing pretty bad will happen if you do quit (like, say, losing your job and not being able to pay rent), you still shouldn't let yourself get into the habit of yelling uncle every time your mood dips. After all, we can't just work when inspiration hits. You have to keep plugging along, even during those grimy days.

That goes for passion projects, personal goals, and side gigs, too. But how exactly do you make yourself keep going when you'd so, so rather not? Well, there are a few tricks that can either convince you or dupe you into keep going. Here are seven ways to convince you to keep working when the motivation has run out — try them out and see how much extra work you'll get done. You'll be happy you did!

We're starting this list off right. Though it's a shameless tip, it's true. Sometimes what you need to convince yourself to keep going is a treat at the end of the (seemingly painful) task. According to Rashelle Isip at Lifehack, "Make plans to reward yourself when you complete a landmark or special project at work. This could be as simple as spending some time pinning images of your dream wedding on Pinterest, taking a good soak in the tub, buying yourself and a friend tickets for that new movie you’ve been meaning to see, or booking a special romantic dinner for you and your loved one at a fancy restaurant."

Whatever it is, make it good. That way not only do you have something to look forward to once you're done with your to-do, but you also lose to stand something if you give up. And getting something taken away from you is a major motivator!

Sometimes it's the fear of not being perfect that makes us not only lose our productivity, but makes us not even want to try. Just think about the blank page with the blinking cursor when you open up Word. It's horrible in its whiteness. So to combat that feeling, give yourself permission to suck, at least for the first draft.

According to Chris Bailey at A Life of Productivity, "Whenever I feel stuck with an article, idea, or project, I simply give myself permission to do the worst job imaginable. Since I’m the only person who will ever see the original version of whatever I’m working on, after I give myself permission to create crap, I always come up with better ideas than if I had waited for a good idea to come along. After ideas inevitably begin to flow, I remove the bad ones I had at the beginning." Don't worry about making your first stab at it perfect and polished — you always have the ability to go back and make it better. For now, just get your ideas down and set up the groundwork.

3. Knock Off Easy Tasks To Get You Motivated

When you've got a big list of to-dos, it can feel like you have too much on your shoulders and you're not motivated to get started. To remedy that feeling, give yourself a couple of freebies by starting off with the easiest tasks on your list. According to Travis Steffen founder of WorkoutBOX, "I start my day with the three of the easiest tasks on my to-do list. This makes a little dent in my list right away, which makes me feel as though I’m on a roll. I always find that when this is the case, I burn through more tasks than I would when focusing on my biggest list items first." It's always satisfying crossing something off of a list and it gets you into that motivated "getting stuff done" mindset. So if you're having a hard time keeping up your momentum, let yourself do a few easy tasks to get yourself in that "killing the day" mind-frame.

4. Break Up The Tasks That Intimidate You

If you're on a major project and feel like it's just too much to scale right now, trick your brain into thinking it's actually not as massive as it originally thought it was. And how do you go about doing that? Break the task up into multiple small tasks, taking out the intimidation factor.

According to Shana Lebowitz at the Greatist, "Goals such as 'work on research paper' are much too vague and intimidating, meaning we’ll be too afraid to actually start tackling them. One way to reduce the fear factor and make goals seem more manageable is to break projects into smaller tasks. Instead of 'work on research paper,' try something more specific, such as 'write first half of chapter three' on Monday and 'write second half of chapter three' on Tuesday." By dicing it up into smaller to-dos, you won't get to hide behind the reason that it's too intimidating and, instead, get work done.

If you're ready to throw in the towel, convince yourself to keep working by setting yourself a short time goal. Plugging away at the computer for 20 more minutes rather than two more hours seems so much more doable, doesn't it? According to Chris Bailey at A Life of Productivity, "Trying to work too hard or too much when you’re not feeling it will only serve to discourage you further. To combat this, shrink how long you’ll work on something until you feel more comfortable with how much time you’ll spend on it."

For example, when I'm just not in the mood to write and would rather spend the next couple of hours watching Frasier, I make a deal with myself and say the couch is all mine if I put in 30 more minutes. It's a more manageable time frame, and it feels like you could see the light at the end of the tunnel. But the cool thing about this maneuver? Once you start working, you usually don't stop after just those handful of minutes. You get into a groove and get more done than you anticipated.

6. Move To A New Location

Have you been working the last couple of hours in your office? At your kitchen table? In a quiet library? Your mood is your state of mind, so refresh your lack of motivation by changing the scene. According to Alan Henry at Lifehacker, "Head out to your local hackerspace to get your DIY on, or drop by your favorite coffee shop to do some writing or coding." You know how charmed and cozy you feel when you go to your favorite coffee shop? Or how about the energy you get when you go work at the banh mi shop down the road? Sometimes all it takes is moving to a new spot to get that motivation running again. That and you can bribe yourself with some yummy coffee and pastries.

Sometimes all you really need is a break. We can't all stay up burning the midnight oil forever after all. Instead of giving up on your to-dos completely, compromise and take a short break.

According to Ali Luke at Pick the Brain, "If you need a break, then take one — and make it something truly recharging. Grab a shower, take a long bath, or even have a nap. Give yourself a real break from what you’re working on, and you’ll find your motivation returning." Give yourself the chance to stretch out the cinks and the mind to rest, and you can come back to the laptop feeling refreshed and ready to keep kicking butt.

So take a break, bribe yourself, or simply be a little more organized. Motivation is probably a little closer than you think if you work for it a little.