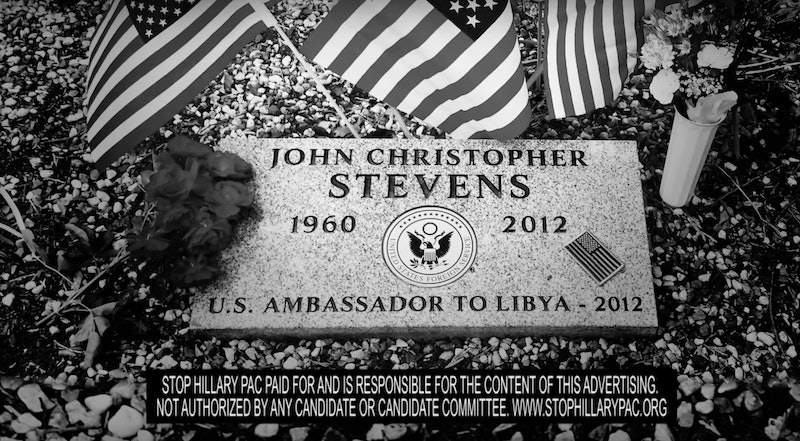 Viewers knew that the first Democratic presidential debate, which aired Tuesday night, would include mentions of the Hillary Clinton Benghazi scandal, but the anti-Hillary Clinton Benghazi ad that played towards the night's end was especially intense. The ad included the names and pictures of the American men, Glen Doherty, Tyrone Woods, Sean Smith, and J. Christopher Stevens, who were killed in action during the Benghazi attack, and included voice-overs meant to represent them asking questions of Clinton. The transcript of the commercial is as follows:

I'd like to ask you why you ignored calls for help in Benghazi and then four Americans were murdered.

I'd like to know why you lied, saying the attack was in response to an Internet video.

I'd like to hear why you tried to silence the Benghazi whistleblower.

But, Mrs. Clinton, I can't. What difference does it make?

The ad, which closed with an image of John Christopher Stevens' gravestone, was creating by the Stop Hillary PAC. Though its name gives it away, the group's website states its mission as follows.

Make sure Hillary Clinton never becomes president! America can't survive another term of Obama-era radical liberalist policies implemented by a Bill and Hillary Clinton team back in the White House. In 2016, it will be too late to stop Hillary. We've got to hold her accountable right now. Stop Hillary PAC was created for one reason only -- to save America from the destructive far-left, liberal cancer created by Bill and Hillary Clinton that's trying to corrupt America. Stand with Stop Hillary PAC today to take a stand for America's future and STOP Hillary dead in her tracks.

When asked during the debate about her thoughts on the incident in Benghazi, Clinton said "Unless you believe the United States should not send diplomats to any place that is dangerous, which I do not, then when we send them forth, there is always the potential for danger and risk."