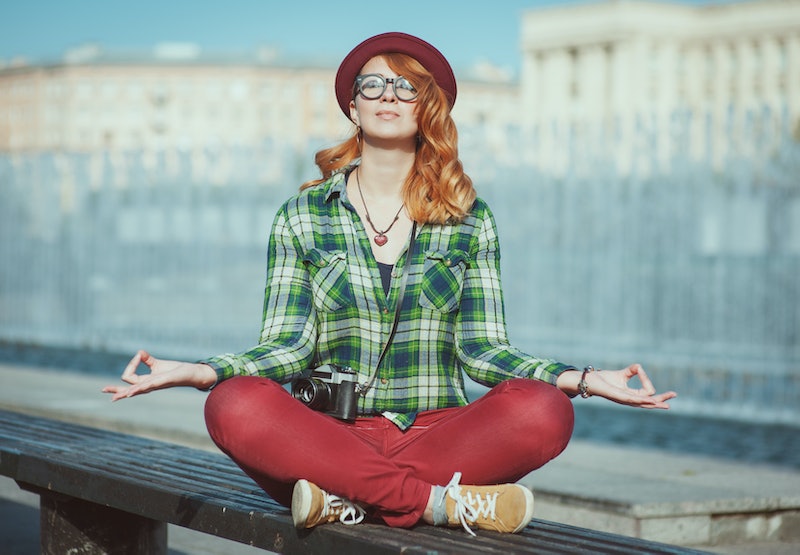 If you live in a city (like L.A.) where I do, you probably pass someone holding a yoga mat on every other block. Then, go to a class and you’ll see lots of people. I actually see more and more men walk into yoga studios, more and more male friends tell me they go, and more and more guys are starting to mention it in their online dating profiles. Is it just me, or is this really the case? According to a new study by dating app Hinge, it’s true. They found that yogis date differently than everyone else — and that male yogis are more desirable online than male non-yogis. And I'm guessing the same goes for women yogis. (On Hinge, you can add a number of personality tags to add to your profile — Yogi, Beach Bum, Dance Machine, etc.)

A yoga class is a great place to meet a guy or girl. As you roll up your mats, it’s the perfect opener to flirt and suggest going out for some green tea afterwards or an organic smoothie. (Remember, I live in L.A.!) Aside from the flirting, yoga is great for our minds, bodies, and posture, as well as for decreasing our anxiety and helping us breathe.

Hinge’s CEO and Founder, Justin McLeod, is a certified yoga instructor and holds free weekly yoga classes at Hinge’s NYC headquarters. Yoga is a big part of the company’s culture and mission. Hence, Hinge decided to explore how many of its users are yogis, and, in the future, they plan to uncover other unique ways in which users connect, also.

“At Hinge, we want to help people connect meaningfully, not just at surface level. One thing we’ve learned is that people bond over unique passions and shared experiences. We launched this series to better understand the dynamics that spark those connections for different groups of people.” —Justin McLeod, CEO and Founder

As far as other stats out there about yogi-lovers — and where to find one for yourself! — check out the below.

Yes, West Coasters “win” as far as having the most yogis… 30 percent! However, overall, nine percent of Hinge’s total user-base consists of yogis, so that means there’s probably some on your coast (or in your city), too. In addition, health and wellness is the most common industry among yogis (are you surprised?!) and Lululemon is the most common yogi workplace (I’m also not surprised!).

Yogis converse 15 percent more than non-yogis, meaning they initiate and respond to more chats than other Hinge users. (Maybe there’s something to all that stretching of the mind and body, after all!) Plus, they’re 20 percent more likely to score a phone number, too!

4. Lululemon Is Better Than Family Guy Any Day

(The stats say that, I don’t!) Yes, yogi Hinge users prefer health and wellness to pop culture and TV (which are the main interests of most Hinge users). According to Facebook likes, yogis’ most popular interests are Lululemon, Equinox, ClassPass, and Refinery29, whereas non-yogis opt for Taylor Swift, VICE, How I Met Your Mother, and Family Guy.

When swiping on male yoga lovers:

When swiping on female yoga lovers:

6. Minneapolis Loves Yogis The Most

However, you can also find a lot of love for them in Cleveland, Austin, San Diego, and Phoenix. (I'm really surprised that L.A. didn't make the top-five!) Overall, in a popularity contest, yogis would win for their popularity on Hinge, since they receive seven percent more right swipes than non-yogis. This is most true in the Midwest and Texas, where the yogi tag performs 50 percent better in these locations than it does elsewhere.

Hmm. I am in Chicago now. Maybe I should test this for myself.