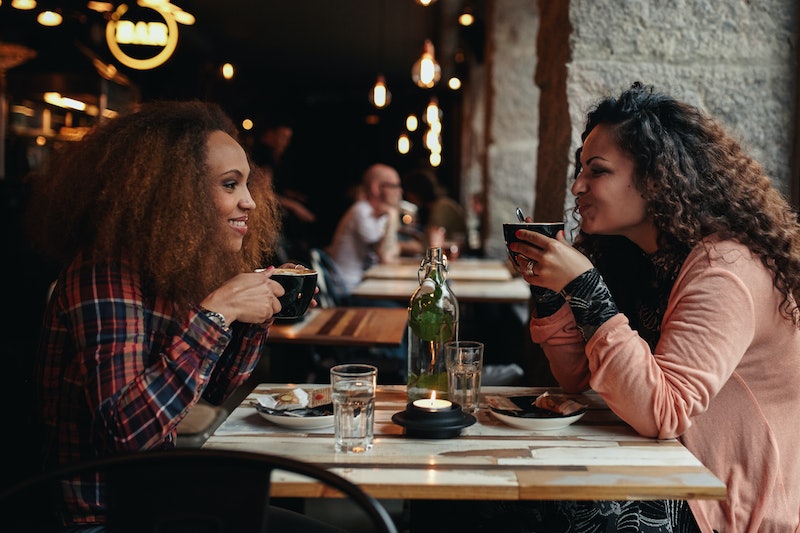 I'm a hopeless friend romantic. I get all teary-eyed when I see besties going for a stroll on a Sunday afternoon, complete with matching lattes and high-pitched giggles. I cried like a baby in Bridesmaids when Maya Rudolph and Kristen Wiig reunited after their temporary hiatus, and Maya sought out Kristen's eyes in the crowd one last time before she sailed away with her new hubby. More than anything else in the world, I want women to get along — and I want us all to be best friends forever!

But this optimism can sometimes prevent me from clearly seeing when friendships in my life are toxic, and even if I do recognize it, my hopefulness for all womankind stops me from realizing that I need to do something about it. Because as important as female relationships are, there may come a time when your bestie is actually dragging you down.

Dr. Patricia Leavy, author of American Circumstance , a novel that explores female friendship, writes on Huffington Post that female friendships actually shape and define us — they "become part of our blueprint." During the course of interviewing women for American Circumstance, Dr. Leavy said she heard countless accounts of unhappy, toxic friendships, and the confusion women harbored when trying to decide whether it was time to cut things off.

Luckily, as Dr. Leavy wrote in her piece, there are some very clear signs that you can train yourself to look out for; and if it's clear that your BFF is a negative influence, you should contemplate how to end things, for the sake of your own health and wellbeing.

1. You're Always Embarrassed When You're In Public Together

Just like you should be proud to walk arm-in-arm with your SO, you should be stoked to go to a dinner party with your best friend. Sure, she might crack some jokes every now and then that don't exactly land, but that's a very different story than you being constantly embarrassed by her. If she's really loud and obnoxious, downing one too many cocktails and uttering politically incorrect expressions left and right, Dr. Leavy urges you to reassess whether you belong together.

You may have found those parts of her really funny years ago, when you were at college parties with glow sticks on your neck, but if you're mortified by her presence more often than not today, Dr. Leavy says "you've outgrown the relationship." Don't feel bad about this fact — it doesn't make you better or worse than her; it just means that you're on separate paths.

2. You Often Get Jealous Of Each Other

This is a big no-no, and it's so common among us women that we overlook it, thinking that it's just a girl-thing. While jealousy is a natural human feeling that is bound to come up in any relationship, how we choose to handle it matters immensely.

Do you allow your envy of her huge job promotion to stop you from picking up the phone when she calls? Does she make snide comments every time she takes a ride in the new car you bought for yourself? If the answer is yes to these situations and other similar ones, you've got some toxic resentment cooking between the two of you — and it needs to be addressed.

Jealousy can be just as damaging when it's doled out passive aggressively, so don't think that the overt, sabotage-like actions are the only signs. If you find that you're supporting each other less or not truly listening to each other when you're sharing important feelings, Dr. Leavy says the foundation of your friendship, strong though it once was, has been compromised.

3. You Gossip About Their Secrets With Other Friends

Gossip can be really juicy and satisfying, kind of like a deep-fried donut, but it should be kept to a minimum, and there's a time and place for it. Mature best friends know the boundaries of chatting about one another behind their backs; Dr. Leavy says while it's OK to share your concerns with another mutual friend when you and your bestie get into a disagreement, it's not cool to reveal their deepest, darkest secrets just because you're angry and you want to make them look bad.

Be honest with yourself here, because it's easy to convince yourself that you're not the one gossiping. I'm just talking about my feelings, and nothing more. Is that really true, though? If you're just as guilty of dishing the dirt as your supposed BFF, you guys need to have a heart-to-heart in order to decide whether you should keep this friendship up.

4. They Don't Get Along With People You're Close With

Your partner or your mom don't have to be best friends with your best friend; that being said, there is a serious problem if both parties never get along. For example, if it's impossible for your friend to be nice to your SO for more than a few minutes before the aggressive remarks to start flying, it's time to rethink whether she is still on your side.

Also, keep an eye out for rude comments your bestie makes about your SO or your sister. Things like "You know, she could really lose some weight and maybe wear a different dress" are totally not OK. If you hear stuff like this on the regular, think seriously about changing your BFF lineup. You want someone around who respects the folks in your life that you love and care for deeply.

5. They Owe You A Lot Of Money

Don't get me wrong; there is nothing wrong with lending a friend money when they're in desperate need of it. However, you can't bail them out of trouble every time their rent is due — especially if they don't, you know, pay you back. If you two are rock solid, the notion of lending money won't be as much of a problem as you'd think (remember how Carrie and Charlotte worked it out in HBO's Sex and the City?). It does become a problem, though, when the "give and take" is off-kilter.

Your BFF might not feel so bad about not paying you back because you've known each since your pigtails-and-popsicles middle school days. That's a clear sign, though, that they don't respect you in the way you deserve. No best friend should take advantage of you, regardless of how many years you've been on each other's speed dial.

6. You Don't Feel Happy Around Them

This one's pretty simple. Your friends are supposed to pick you up when you're down, tell you those jeans were tailor-made for your butt, and encourage you when you're nervous about that upcoming job interview. Dr. Leavy says that the clearest barometer for any friendship is "your own mood and behavior." If you frequently feel sad and emotionally run-down in her presence, you need a new bestie.

7. You Don't Bring Out The Best In Each Other

Unhappiness could also manifest in dishonorable behavior. You might get together and just talk trash other people, or be short-tempered with the waitress while ordering your sandwiches — all because you're not feeling very happy when you're with one another. Not bringing out the best in each other? Dr. Leavy says it might be time to cut the cord.

Want to know more reasons why your friendship might not be all it seems? Check out Dr. Leavy's article here.

Ed. Note: A previous version of this piece did not properly credit Dr. Patricia Leavy for her piece, "When Female Friendship Fades." We regret this error.

More like this
The Top Mistakes Scorpios Make In Relationships (& How To Avoid Them)
By Nina Kahn
How To Do The Intimacy-Boosting Lotus Sex Position
By Laken Howard and Lexi Inks
What Is The Forest Personality Test? The TikTok Trend, Explained
By Georgina Lawton
Why A Relationship Timeline Isn't Necessary For Everyone
By Lexi Inks
Get Even More From Bustle — Sign Up For The Newsletter