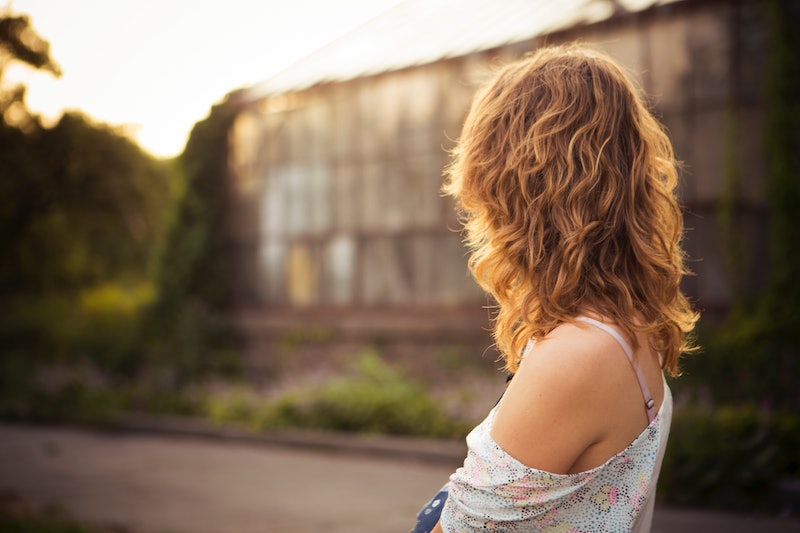 Does just going through the motions of a regular day ever make you feel frustrated? Like, really, really frustrated? And do you ever feel like you kind of have no idea what to do about your frustration, besides wait for it to pass on its own, take your rage out on some innocent throw pillows, or talk to some food about it?

Yeah, me, too. Though you may look at me and see a tiny, calm woman dressed in what appears to be a child's sweatshirt, on the inside, I am full-on hulking out about all the minor annoyances of daily life — inept customer service at the bank! Mean tweets from strangers! A project that I messed up at work! An extremely mysterious liquid that dripped onto my face from the subway ceiling! Most days, I manage to deal with these frustrations, but every so often they add up too quickly for me to process them, and I, in the formal medical parlance, totally lose my sh*t. This experience can take the form of almost anything — from overreacting to something innocuous my boyfriend says, to the occasional bout of public frustration-tears.

Obviously, there has to be a better way to deal with the frustrations of life than this. I may be wearing clothes that I bought from the kids section, but I'm a grown woman, damn it! So I dug up five things we can all tell ourselves the next time we're really frustrated. They might not solve all our problems — but they may keep us from being that person on the street who is kicking a fire hydrant in wordless fury. And that, frankly, is good enough for me.

When we feel angry, venting seems like the natural solution, right? Transferring all the frustration that you're bottling up inside onto something outside yourself — by, say, telling a friend all the details of the thing that's making you mad, or playing some ultra-violent video game where you can make zombie heads explode — seems like it should let some of your feelings out and make you feel better. But do you actually feel better after you take out your frustrations on something or someone?

In 2002, Iowa State University professor Brad Bushman conducted a study examining whether catharsis was an effective treatment for anger. Bushman purposely angered subjects and then divided them into two groups — one was told to hit a punching bag to take out their frustrations while thinking about what had made them angry, while the other group was distracted with information completely unrelated to the subject that had made them angry. When Bushman later had them engage in an activity that measured their anger, he found that the subjects who had theoretically "taken their anger out" on a punching bag were actually angrier than the people who had done nothing to vent their rage.

This isn't to say that you should just sit around when you're frustrated — burying your feelings or pretending that they're not real pretty much always makes us feel worse. But instead of hyper-focusing on the frustrating event by looking for ways to vent about it, we can be better served by other behaviors. Like...

2. "I Should Go Focus On Something Else"

The power of distraction is very real. A 2010 Harvard University about mood and behavior found that subjects were unhappiest when they had nothing to focus on. “We hypothesize that it [distraction] is a cause [for unhappiness],” noted study author Matthew Killingsworth. This can feel doubly true when we're angry or frustrated, and a lack of distraction can make us feel like our bad feelings are increasing.

So instead of focusing on dealing with your anger through venting, you may want to try something that will take you out of your head and see if it soothes you. Exercise and reap the mood-improving power of endorphins, if you can; if you can't, focus on a distracting hobby (like knitting, or a non-violent video game) or something entertaining (funny video, an interesting podcast, a GIF of a puppy rolling around like a bowling ball).

This is not an appropriate reaction for every single frustrating situation in the world, of course; but it can be a great alternative to stewing into your own rage-juice.

A lot of the time, our frustration is a result of feeling caught off-guard. Maybe we thought we could run a quick errand at the store over lunch, but we didn't expect the long, slow line we're now stuck in. Or we're on the way to work and find ourselves on a train that has suddenly become delayed. I was frustrated for hours last night because of some random troll-y Internet commenter. All of these situations feel frustrating because they feel like a break from the natural order, a crappy situation that no one has to endure but us.

But while we may feel like we're dealing with problems that no one else has to cope with, that's not usually true. Psychologist Albert Ellis thought that most of our unhappiness was related to confused expectations. We think things shouldn't happen to us, which is why they drive us so nuts. But if you look at the past, your frustrating situation probably isn't as unlikely as you initially think it is. Your train has probably been delayed before, and I was just in the middle of explaining to a friend what this jerk on the Internet said to me when I got struck with a sense of deja vu — I had had this same conversation with this same friend, weeks ago, about a different troll-y internet commenter.

No one should have to deal with troll-y Internet commenters, of course — but realizing that these things happen all the time calmed me. The idea that I'm not being singled out by the universe for particularly shabby treatment — which is often how we feel when we're frustrated — but rather, that I was just in the middle of some very common circumstances, was very soothing. It can make your frustrating situation seem less like some kind of personalized cosmic punishment, and more like a rain storm: yes, it sucks — but you're definitely not the only person getting rained on.

A lot of the time, when frustration over something small overwhelms us completely, there's more in play than just our package that hasn't arrived or a project that's slightly behind deadline. As Peter Bregman noted in the Harvard Business Review, we often project our negative emotions onto something unrelated to the actual thing that's making us unhappy — Bregman's example is of a little boy who gets yelled at by his father, then immediately turns around and hits his sister. Often, petty annoyances serve the same purpose in our lives as that poor younger sister — a safe target for all our actually intense negative feelings about other stuff.

I recently spent a week being disproportionately angry about a package I'd paid extra to have shipped overnight, but which still hadn't arrived. From the way I went off about it, you'd have thought it contained my child's insulin or something (it contained a $25 coat). I wasn't actually angry about not having the coat (it was still too hot to wear it) or the $8 extra I paid for shipping. I was mad at myself for something completely unrelated, and rather than resolve my feelings about that, I went on a tear about this shipping company, writing some emails to their customer support team that I am truly ashamed to have sent now (they may have leaned heavily on the phrase "profoundly disappointed" and they may also have been written in all caps, and sent in the middle of the night).

Thinking about what's really bothering you isn't guaranteed to make you feel better, of course. But focusing on the real problem is more likely to lead to you working on a solution, or just letting it go — something that writing crackpot, all-caps emails to shipping departments definitely won't.

Often, when we're frustrated, there's a hidden (or not-so-hidden) thread of anger at ourselves. We're mad at the circumstances because they remind us of something about ourselves that we think is awful — for example, I often get deeply frustrated by train delays, but I am actually upset at myself for being perpetually late everywhere I go. If we catch ourselves in this, we often react by doubling down on the self-negativity, getting mad at ourselves for being frustrated about something petty when "other people have real problems" or getting ourselves into the same frustrating situation over and over again.

But going off on ourselves for being petty or a loser won't make us feel any better; if anything, it will give us more negative feelings to deal with, which may come out through more overreaction to frustration. Instead, we can try having compassion towards ourselves. Self-compassion means extending forgiveness to yourself, rather than harping on your perceived mistakes or flaws.

So instead of beating yourself up for always being late or freaking out about how the delayed train is ruining your life, you could utilize the three primary tenets of self-compassion, as outlined by Belle Beth Cooper on Lifehacker: be mindful, be gentle, be honest. This could mean admitting to yourself that everyone screws up, and being late doesn't mean you're a bad person; being open to examining the habits that make you late rather than just yelling at yourself for being irresponsible; and thinking about your actual motivations, rather than how various people are angry or disappointed in you.

There may not be a magic cure for frustration (or express mail packages that go astray); but we can decide how we react to both of them, and that might be almost as helpful in the long run.