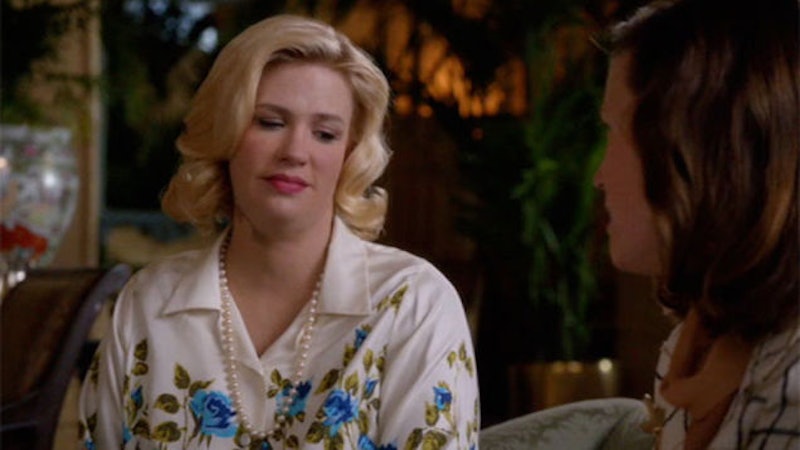 Being a plus size person on Halloween can lend itself to a whole host of problems — like finding a costume that fits (ish) and being uncomfortable in said costume all night. The last most plus size people need on top of that is to see someone else mocking them by wearing a fat suit costume. If a thin person wants to embody a fat character from a film or TV show, then an imaginative outfit that portrays that character without adding any offensive extra padding will do just fine. Just think about it: If a plus size individual was to wear a Kim Kardashian costume, size wouldn't have to play a factor at all if the rest of the details were just right.

By wearing a fat suit — regardless of whether it's to dress like a specific character or not — the person sporting it is essentially saying they find fat people laughable. They're openly invalidating plus size individuals for what they look like, and turning somebody else's appearance into a joke. It's especially cruel when you consider that the person will likely encounter a fat person at a Halloween party or their local bar's holiday-themed night. And that fat person will probably feel pretty sh*t at the sight of their body type being ridiculed.

As with any Halloween costume, you should insert some empathy into your decision making. Will your costume really upset anybody that sees you in it? Is your costume offensive? Does your costume marginalize a group of people, or reduce them to a stupid stereotype? Obviously, there are people who believe offending others is funny. But here are some reasons you shouldn't wear a fat suit this Halloween.

1. They're Flat Out Offensive

I'll start with the bottom line: Wearing a fat suit is offensive because you're turning an entire body type into a joke. Fat people have been made the targets of comedy for too long, and by "dressing up" as one, you're only perpetuating the shaming rhetoric rather than standing up against it.

2. And You Don't Have To Be Offensive To Be Funny

Topical ensembles are funny. Dressing up as television characters is funny. Hell, you can even have a funny feminist Halloween costume. At the end of the day, if you can only find humor in things that offend, then you probably don't have a very good sense of humor.

All a fat suit tells me is that you think being fat is a joke, that being fat can be mocked, and that being fat is laughable. To put it simply: It's not. Thousands of humans have reclaimed the word "fat," and are fighting everyday to diversify the media and the fashion and beauty industries at all. Please stop belittling their efforts. It takes a hell of a lot of hard work to fight against screwed up beauty ideals engrained in a culture.

When people are already laughing at how you look day to day, why would you want to risk further humiliation by dressing up in an actual costume? In all honesty, on bad days I've sometimes felt "too fat" to leave the house. But Halloween has the potential to be one of the funnest days of the year. Don't take the right to its magic away from fat people by invalidating and mocking their identities.

5. The Whole Thing Is Unimaginative

Fat suit costumes are purely unimaginative and lazy. If your ensemble is based on a fat character, then take whatever sartorial steps you need to make to ensure your costume is good enough that it's recognizable without the weight factor. If your costume is solely based on being a fat person, then you're just being rude. There is a whole world of one-piece Halloween costumes you could opt for — especially if you're a straight size individual.

For straight size individuals, it's easy to don a fat suit and take the piss out of fat individuals. But how could a fat person possibly do the same? Sure, plus size people can obviously dress up as thin characters for Halloween, but a plus size person could never dress in a "skinny suit." There's no room for equality when it comes to this type of costume, meaning that your thin privilege will be clear as day under all that padding.

If you're considering wearing a fat suit this Halloween, please don't do it. Exercise some common sense, mix in a little empathy, and acknowledge that by wearing a fat suit you'll be mocking a whole group of people who have done nothing against you.

More like this
I Have Eyebrow Alopecia – & Microblading Gave Me My Confidence Back
By Jessica Morgan
12 Androgynous Outfit Ideas That Feel Effortlessly Cool
By Syd Stephenson
35 Ideas For 4th Of July Nails That Go Beyond Red, White, & Blue
By Audrey Noble
23 Times Meghan Markle Dressed Just Like Princess Diana
By Bustle UK
Get Even More From Bustle — Sign Up For The Newsletter