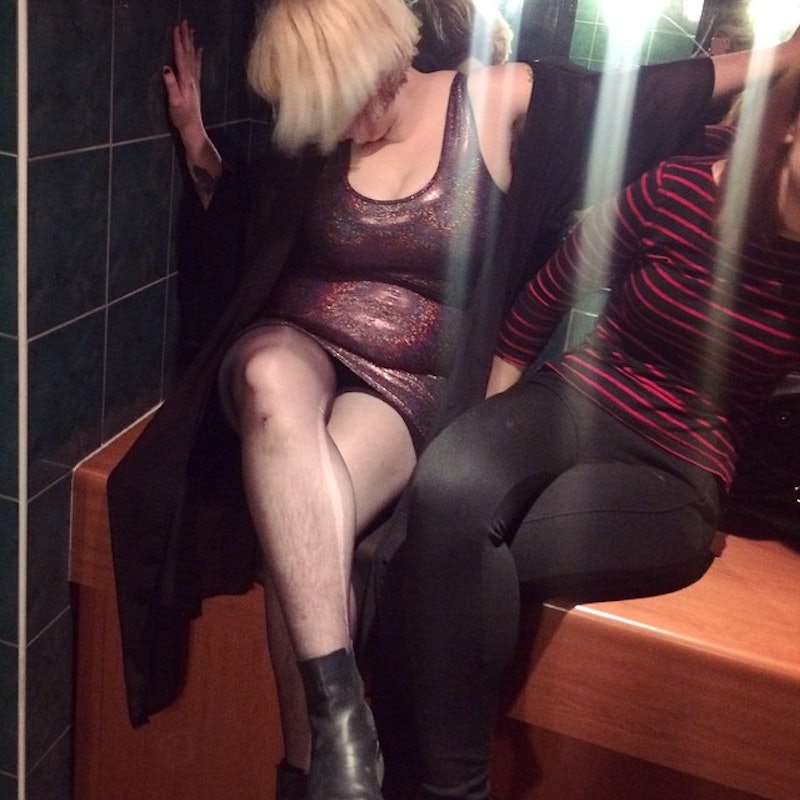 It's 2015 and almost everybody has heard of the body positivity movement — and almost everybody has an opinion on it. In my experience, most of those opinions consist of positive, insightful thoughts on the harms of body shaming and the pluses of self love. Unfortunately, some people still have anti-body positive mindsets and anti-body pos movements still exist. Even if someone doesn't agree with the cause, though, at least they're talking about it. At least body positivity is finally up for discussion. What hasn't been quite as up for discussion, however, is the analysis of thin shaming versus fat shaming.

Body shaming affects everyone and can be tied to almost any aspect of our appearances — from weight to hair color to body mods to the size of your nose. If someone has critiqued your body for how it looks at any point in your life, then you, my friend, have also been a victim of body shaming. This type of bullying is arguably harmful because it perpetuates the notion that somebody's self worth should be based on their appearance.

This is why the body positivity movement is so crucial. Body positivity celebrates all body types, body sizes, and body shapes — even those that are not traditionally portrayed as beautiful in the media or in society. To remain inclusive, even body types that are celebrated in the media and subscribe to traditional and Western beauty standards must also be included. It's not a case of celebrating one and not the other, but celebrating everyone and everybody.

If you, like me, are a fat person, it's almost a fact of life that you'll be under attack for your weight. Fat shaming and body shaming in general are a part of most of our lives both when we're growing up and as adults. Throwaway comments from friends and family may mean nothing to the person saying them, but could damage the self esteem of the person being discussed, who has grown up in a society that has reiterated that the only way to be beautiful is to be thin. It's easy enough to then understand why so many fat people lash out at thin ones in order to feel better about themselves. Too often are quotes circulated on social media sites along the lines of, "Bones are for dogs; meat is for men," "real women have curves," or many other derivatives of the same message.

When you consider that the media shows us a binary of fat equals bad, thin equals good, the logic behind flipping that around in order to help fat people feel better makes sense. We're not usually taught that everybody can or should feel positive about themselves, after all. I personally believe, however, that the fat people who are actively thin shaming are doing it because their culture has taught them that in order for one group of humans to be looked upon positively, another group of humans must be perceived as inferior or "less than." This is obviously problematic. Beauty can be found in all body types, and another person's aesthetic appeal does not detract from your own. We can boost ourselves up without pushing others back. We can adore ourselves without hating anybody (or any body) else.

However, there is a difference between thin shaming and fat shaming that is rarely discussed. With the progression of the body positivity movement to include thin bodies, the different types of shaming have been equalized. Arguably, this should not be the case.

When it comes to thin shaming, the sufferers usually walk away with their thin privilege in tact. They'll step aside from an insult and into a society and media that celebrate their body. Although that doesn't mean the insult doesn't hurt, it does means the insult doesn't usually stick in the same way. When a fat person gets fat shamed, the shame often sticks, reverberating through childhood abuses, families' weight commentary, and a constant attack on fat bodies by the general public. We have to look within ourselves to recover from it, because there is no such thing at fat privilege.

Melissa A. Fabello put it best on Everyday Feminism:

But the difference between these negative feelings and fatphobia is this: The only person worrying about whether or not I’m meeting beauty standards is me. And that’s not the same for fat folk.

And while your internal struggle is real and significant, the point is: You might hate your body, but society doesn’t.

Forcing the thin narrative onto the fat narrative is arguably disrespectful and derails the issue at hand. A fat woman should be allowed to write about her issues within body shaming and fat shaming, without having to include an aside to note that thin shaming also happens. Although thin shaming is a horribly problematic issue and wholly negative, it's a different form of negativity than fat shaming. From my experience, I've seen thin shaming be a reaction to a person battling with being fat shamed, while fat shaming is a reflection of social conceptions of beauty.

At its core, the body positivity movement is aiming for a world where neither type of shaming exists — where body shaming doesn't exist at all. The point remains, however, that the battle to remove fat shaming is much larger than that to remove thin shaming.