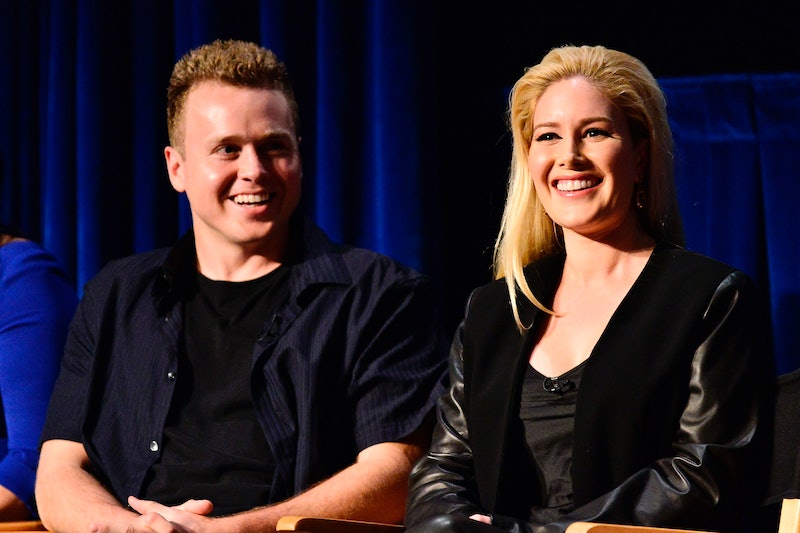 Oh, Heidi and Spencer. Most recognize this famous duo from MTV's beloved "reality" series The Hills, which featured a group of young men and women living it up in Southern California, all while dealing with whatever life threw their way. Their lives usually involved dealing with relationships, friendships, where to go for brunch, going to beach parties (never wearing combat boots), and, of course, being sucked into the most ridiculous drama. *sigh* Those were the good old days, weren't they? Anyways, Heidi Montag and Spencer Pratt opened up about The Hills in an interview with Complex magazine and, FYI, they see the show very different than most fans.

Unsurprisingly, Heidi and Spencer shine a negative light on Lauren Conrad (Heidi's former BFF and Spencer's nemesis), which is to be expected after all that drama between them. How can you forget those conversations which included lines like: "You know what you did!" and "I want to forgive you and I want to forget you." In addition to their L.C. talk, there are a ton of other "facts" via the perspective of Speidi that will make my fellow fans of The Hills feel nostalgic.

Before I get to the six "facts" about The Hills Heidi and Spencer teach fans in their latest interview, I feel it is my duty to inform anyone reading this that Spencer still collects crystals and is hoping they will make him wealthy one day.

1. Lauren Is The Villain

Of course she is. Neither Spencer or Heidi feel bad about everything that transpired with Lauren. As Spencer put it ever-so-not-lightly, "Lauren is a cold-hearted killer. That’s what people don’t get. She will cut you in your sleep. She tried to destroy us. If you want to throw missiles, I’m throwing a nuke. This is how I operate."

2. That Sex Tape Is Real

They both still say the alleged sex tape featuring Lauren and her ex-boyfriend Jason Wahler is 100 percent real. (For the record, if you weren't a fan of the show, Lauren denied its existence.) Also, if Heidi and Lauren ever had a conversation about it, Heidi said, "Today, I would be like, 'B*tch, you know what you did.'"

They both still claim the alleged sex tape featuring Lauren and her ex-boyfriend Jason Wahler is 100 percent real. (For the record, if you weren't a fan of the show, Lauren denied its existence.) Also, according to Heidi, if she and Lauren ever had a conversation about it now, Heidi would still hold her ground. "Today, I would be like, 'B*tch, you know what you did,'" Heidi said.

4. Kim Kardashian Was Cut From An Episode

Huh? Yeah, you read that right. Apparently, Kim once helped Heidi organize her closet. Spencer said, "[Kim] used to call Heidi to organize Heidi’s closet. Kim was edited out of Hills episodes organizing Heidi’s closet." Too bad viewers didn't get to see that.

Remember all that drama between Spencer and Heidi's families? Nowadays, Spencer still doesn't talk to Heidi's sister Stephanie and "is at odds" with his own mom. Spencer said that his mom "is a Lauren supporter." As for Heidi's family, Spencer said, "They [the show] paid off [Heidi's] mom and her sister, who were broke. They were writing them twenty thousand dollar checks to be Team L.C." Today, Heidi and her family have mended everything and still keep in touch.

Former Hills star Jen Bunney still stays in touch with Heidi, but isn't friends with Lauren. She called the show and it's portrayal of Speidi "ridiculous." She added, "The show is a very poor representation of people’s character all around. As the series progressed and it became more popular, the portrayals stretched reality more and more."

So, are you still #TeamLauren or did Heidi and Spencer convince you to start rooting for #TeamSpeidi?

More like this
Erika Jayne's Estranged Husband Tom Girardi Has Been Indicted On Fraud Charges
By Jake Viswanath
'RHOSLC’s Heather & Whitney Are Still On A “Friendship Break” After Season 3 Reunion
By Jake Viswanath
Everything To Know About 'RHOSLC' Season 4
By Jake Viswanath
RHOP’s Robyn Dixon Explained Why Juan Paid For Another Woman's Hotel Room
By Brad Witter
Get Even More From Bustle — Sign Up For The Newsletter
From hair trends to relationship advice, our daily newsletter has everything you need to sound like a person who’s on TikTok, even if you aren’t.