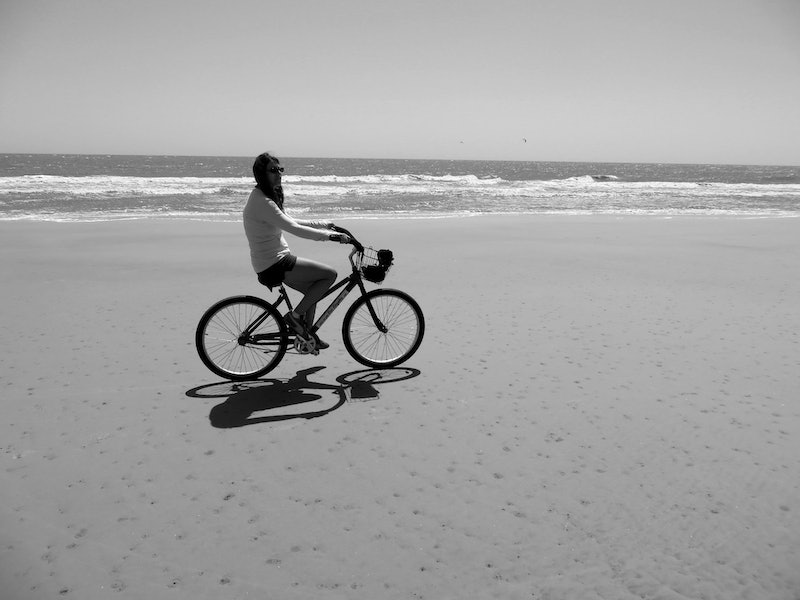 When I was younger and imagining what the rest of my life would be like, I used to envision myself exploring the world and reviewing hotels and restaurants for a travel magazine. I wanted to savor chanco en piedra in Chile, poa pee in Thailand, and muhallebi in Turkey. I thought I'd sunbathe on the beaches of Tulum with the silhouette of Mayan ruins towering at my back. Or maybe I’d live in Los Angeles and star in a sitcom of my own creation. I pictured myself on awards nights, draped in designer sequins. I've also pictured myself educating women in under-developed countries. My purpose would be indisputable. My work would matter.

What I never pictured, however, was the life I actually ended up with. I never imagined myself sitting at a desk, staring into the harsh light of a computer screen, coordinating class schedules for college students. I didn’t see myself repeating the same bland statement — You haven’t completed your liberal arts requirement — over and over again to an endless stream of young adults: some pleasant, some expressionless, some downright rude. I didn’t imagine the boredom.

The monotony creeps beyond my office walls. After work, I microwave leftovers, assemble tomorrow's lunch, watch a sitcom for the fourth time through. My weekends are spent reading, writing, straightening the apartment, and grocery shopping. While such inactivity can restore my spirit after a hectic week or a series of eventful weekends, just as often, I find myself stuck in an unstimulating pattern of mindlessly checking emails and scrolling Twitter.

Even now, seven years into dedicating my free time to developing a writing career that has yet to fully launch, I still allow myself to revisit my old dreams. I can almost hear the applause of my would-be fans, smell the cardamom and curry in an Indian marketplace, feel an impoverished child ease her tiny hand into mine.

I recently learned that my husband, Phil, had similar expectations for himself. As a teenager, he imagined growing up to be a hero: a fireman charging into a burning building or a Coast Guard soldier diving into the frigid waters of the Atlantic. What led us to believe we were bound to be extraordinary? And how should we feel about the fact that things turned out a bit differently?

For me, it all began with John Mayer.

I was 16, driving my mother’s minivan home from the beach when I passed a camera crew milling about on the town green. Once I stopped at a red light, I squinted in their direction, and there he was. The rock star who once ran through the halls of my Fairfield, Connecticut high school, and now won Grammys. He'd done the extraordinary. If he did, why couldn't I?

I threw my car into park, pushed open the door, and sprinted to him — abandoning my idling vehicle in the middle of the street.

I arrived mid-interview, breathless. “John Mayer. Will you sign —” And that’s when I realized, in my rush to reach him, I hadn’t brought anything to bear his signature. I surveyed my person and found only one solution “— my shorts?”

“Sure,” he said, amiably. He dropped onto a knee, pinched the hem of my shorts, and signed the cotton cloth. My eyes widened, willing myself to sear this memory onto the folds of my brain. I thanked him profusely and returned to my car.

This kind of thing wasn't a lone incident. Two years ago, I spotted Sarah Jessica Parker in London’s Green Park. Phil and I were walking back from Buckingham Palace when we heard a child ahead of us ask, “Mommy, can we play over there?” All the mother said in reply was, “Sure!” But it was enough for me to recognize that the voice belonged to Parker, the woman behind Carrie Bradshaw. Bradshaw's character on Sex and the City had always been a symbol to me of a life beyond the ordinary, of the possibilities that each of us contain. I was eager to get a closer look.

My eyes darted down the path to see a willowy woman with wavy blonde tresses and her companion. She bent over, and her hair fell in front of her face before I could confirm her ID. I quickened my pace until I was about four feet away from the couple. Sarah was still bent in half, sifting through her purse, her back to me. Phil said, “Alena, I know what you’re thinking,” in a tone that attempted to pull me back. I ignored him. He couldn’t have known what I was thinking, because I wasn’t thinking. I was simply doing.

When Parker was directly in front of me, I crouched down into a Gollum-esque position and circled her, craning my neck, searching for her chiseled cheekbones, strong but glamorous nose, close-set feline eyes. The actress froze, her hair still curtaining her profile. Finally, I relented and straightened to find Matthew Broderick eyeing me; he was close enough that we could have shaken hands. I cleared my throat and walked past, suddenly aware of how inappropriately I’d just behaved.

What made me act in a way that might have been cute at 16, but was definitely unacceptable at 26? When I see superstars in person, I feel as if I am brushing against the sensationalism I once yearned for; I consider it a taste of the life I missed, a moment beyond the monotony of ordinary life.

But perhaps celebrities are experiencing similar envy, and maybe awe, too. Does Sarah Jessica Parker yearn for an uninterrupted stroll through the park with her children the way I yearn for a moment in her bright lights? Does she thirst for monotony, for a laid back Saturday, for a desk job peppered with lazy scrolls through Facebook, the way I thirst for a starlet’s thrills?

I've made sure to make time for new experiences — my husband and I go to concerts, explore national parks, join volleyball leagues. We kayak in the bay and bike around Central Park. We pet freaking wolf dogs. But not every day can be extraordinary.

In fact, most of 2014 was mediocre — including New Year's Eve. On any other day, listless lounging can be excused; but on December 31, social media begs us to report our exciting plans with a status update, and then further support it with photographic evidence. The unspoken question being: How extraordinary are you?

That New Year's Eve, we'd just returned from a week of Christmas visiting, and neither of us could bring ourselves to meet up with friends. So we spent the holiday with a home-cooked meal and a bottle of champagne. Gray shrimps sizzled in a bath of garlic, oil, lemon juice, white wine, and chicken broth. Poised over the skillet, I was troubled by second thoughts. Were we squandering this night? Was everyone else doing the New Year better?

Then, as if he knew what I was thinking, Phil stood up from the kitchen table where he was listening to music. He removed a bud from his ear and slipped it into mine. The guitar strummed and the vocals swung. Phil handed me a glass of champagne; I sipped it and the bubbles popped across my tongue. We swayed to the song’s rhythm and sunk further into each other until my cheek rested against the scruff of his neck. We danced inside the tangle of wires while our shrimp turned pink and plump on the stove and the sun smoldered on the horizon.

And all I could think was, This is just an ordinary moment. Isn't that extraordinary?