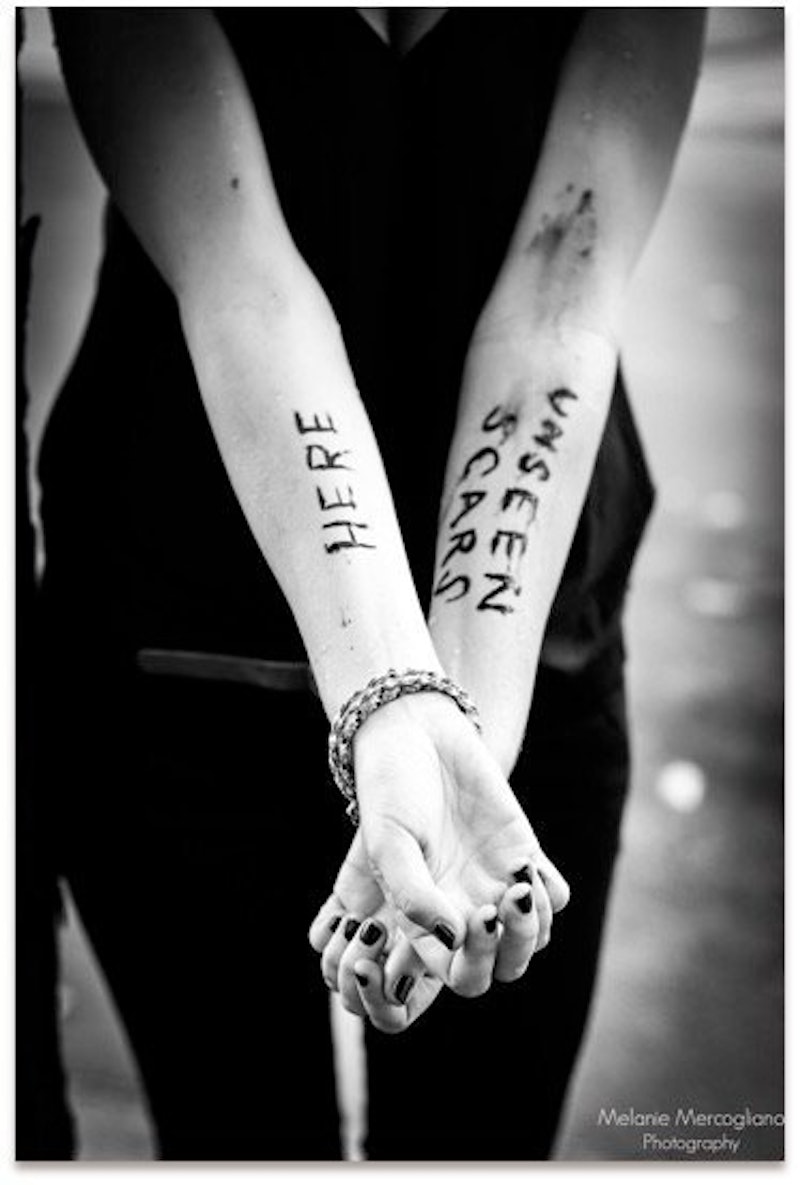 You've seen images showing the effects of physical abuse: Black eyes, broken noses. But the less physical, but no less devastating, aspects of domestic abuse often linger on longer than any bruise. Not all abuse is physical, after all, and no domestic abuse is purely physical. For blogger Sarah Hosseini, her abuser only hit her once — but she still wanted to find a visual way to show the lingering effects of the emotional abuse she endured. That's why she partnered with her friend, photographer Melanie Mercogliano, to present "Unseen Scars," a photo essay showing the effects of emotional abuse, years after Hosseini endured such treatment at the hands of an ex.

"While researching the topic, I found that most of the domestic violence discussion emphasizes the dangers and traumas of physical abuse," Hosseini wrote in an email interview with Bustle. "Which are obviously very real threats. I also found that most domestic violence awareness photography had subjects that displayed signs of physical abuse (bruises, cuts, etc.)." Because October is Domestic Violence Awareness Month, Hosseini — who is pictured in the photographs — wanted to create vivid, symbolic photographs to show a different side of abuse. It's an awareness campaign that she hopes will help others — and which took a great deal of courage to create.

"The hardest part of doing the series was being so exposed emotionally and physically," she wrote:

I mean obviously, this series is out on the Internet, and published. My abuser could easily view it at any time. Knowing that he could be looking at this — I'm terrified of what that might conjure up in him. Is he still the same person? Will it make him feel enraged? Will it make him feel guilty? Will he try to attack me on the Internet? Will he try to physically track me down and attack me or my family? Being a survivor means you heal, but the wound is still there. On many levels (as shown in the series), I exhibit these paranoid behaviors and thoughts.

Each part of the photo essay includes a black-and-white photograph, usually of Hosseini, while she goes through a daily routine. Under the photo, Hosseini writes about her experiences with domestic abuse: The time her abuser through her into the backseat of a car and threatened to abandon her in the middle of nowhere. The time her abuser lied about having HIV. How still, to this day, she sleeps with a panic alarm remote.

Now, Hosseini is married with two daughters. They're only 4 and 5 years old, so she doesn't talk about emotional abuse with them directly. But she insists that her daughters speak up for how they want to be treated, even if they feel pressured to stay quiet, as part of an action plan for building their assertiveness and self-ownership. She knows, after all, how emotional abuse can tear that all down.

You can see Hosseini's and Mercogliano's complete project at The Huffington Post.