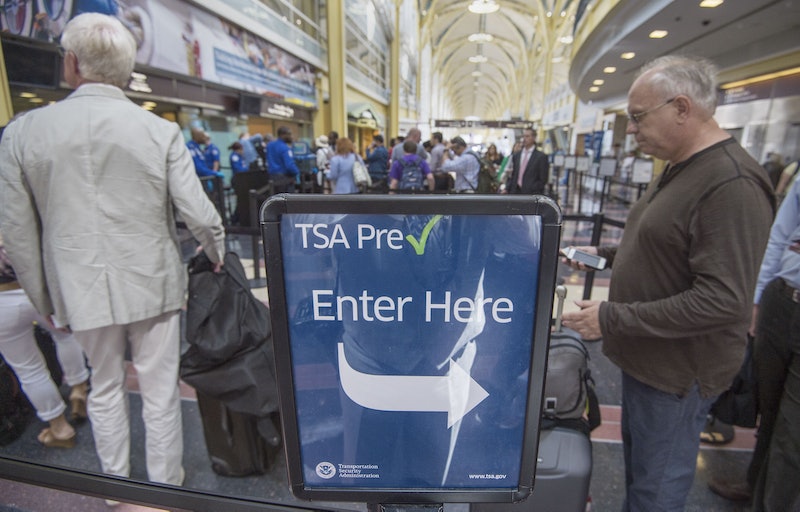 Airport TSA screenings can slow down all of our journeys, but transgender travelers have faced a growing number of problems at U.S. airport security checkpoints since the TSA began implementing patdowns and the use of body-scanning technology. This September, in one of the best-documented checkpoint experiences, a trans woman live-tweeted her experience after going through a body scanner. TSA workers said her scan showed an "anomaly," which was in fact her penis. In partial response to her experience, TSA will change its transgender passengers policy and discontinue the use of the term "anomalies," implementing new protocols and training for agents.

In TSA lingo, an "anomaly" is something the body scanner says to inspect further. The first-generation body scanners showed a full outline of the human body, which made many travelers uncomfortable. The new version just shows a generic outline of a body with a yellow or red block over these so-called "anomalies," which likely appeared over Shadi Petosky's groin during the September incident. The machines have different settings for men and women — but not transgender individuals — which is why Petosky was flagged and then told to "get back into a machine like a man."

The changes announced Wednesday do not include what language the TSA will use instead of "anomaly," but agency officials claim to be working with trans advocates to find acceptable terminology. Kimberly Walton, assistant administrator at the TSA Office of Civil Rights and Liberty, told The Advocate that all screenings are conducted without regard to sexual orientation or gender identity (along with other protected statuses like race, religion, etc.).

But she also said that TSA workers are trained to screen travelers as they present. "The technology that we deploy, the best technology for the current and historical threat, does require the transportation security officer to either identify the person as a male or female," Walton told The Advocate. So someone who identifies as male would be treated like a male with regards to the body scanner and patdowns. But if the TSA agent is unsure whether the passenger identifies as male or female, they're trained to "discreetly and politely get clarification." Even in the perfect situation, this can be embarrassing, especially since only 20 percent of transgender people who have transitioned have been able to update all forms of ID. Different state and federal agencies require different documentation.

With or without corresponding IDs, though, the "improved" policy still leaves out passengers who don't fit within one box of the gender binary. Anybody who chooses not to identify as male or female will continue to face problems, as will individuals whose gender identity and presentation doesn't "match" their anatomy, like in Petosky's case. Two separate civil rights investigations are looking into her TSA experience.

Shortly after the incident, 32 members of Congress wrote to the TSA, demanding these investigations as well as in-person diversity training for the transportation security workers at the nation's airports. Walton said some webinar training have begun, with help from the National Center for Transgender Equality and Gender Justice Nevada. However, this training has only been provided to supervisors, and not to workers who interact with passengers.

Despite working with the TSA, the National Center for Transgender Equality demands more from the agency. NCTE Director of Policy Harper Jean Tobin told The Advocate that TSA's response "misses the point." The advocacy group questions body scanners' effectiveness, especially weighed against privacy concerns. "If TSA is going to rely on body scanners at all — and there is plenty of evidence they're not only too invasive but ineffective — they have to be able to tell the difference between a body part and a bomb. Right now they can't, and that needs to change," Tobin said.

While policies continue to be updated and training is rolled out to a larger number of TSA staff, Walton said there are a few things transgender travelers can do. She encouraged travelers to call 855-787-2227, tell the TSA about their travel plans, and identify themselves as transgender individuals. The agency can then notify staff working at checkpoints in advance.

While the new policy is a step forward, it is just a small step. That said, it's good to know the TSA is taking these problems seriously.

More like this
10 Thanksgiving Alternatives You Can Celebrate This Month
By Katie Mitchell
Iran Has Issued A Death Sentence Over Mahsa Amini Protests
By Catharina Cheung, Darshita Goyal and Maxine Harrison
Buckingham Palace Aide Resigns Over “Unacceptable” Comments To A Black Guest
By Shahed Ezaydi
Ayurvedic Principles & Family Are At The Root Of Fable & Mane
By Justine Knight
Get Even More From Bustle — Sign Up For The Newsletter