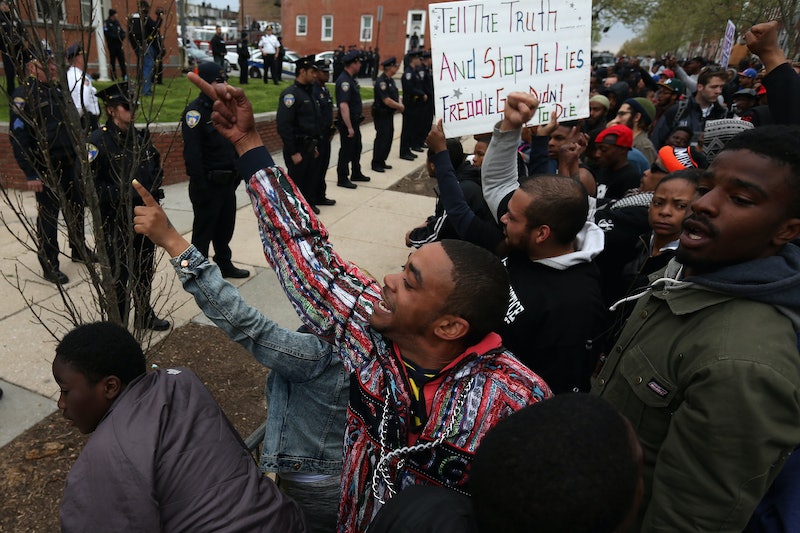 A small group of protesters refused to leave Baltimore City Hall last night after a city council committee approved the permanent appointment of Baltimore Police Commissioner Kevin Davis, who had been serving in an interim capacity, on Wednesday. At about 3:15 a.m., many of the protesters left the building, saying that dozens of officers had appeared in the hallway of the area where they were protesting with flex cuffs, saying that City Hall was closed and they needed to leave. Baltimore police arrested about 12 protesters who said that they would not leave until Davis and Mayor Stephanie Rawlings-Blake agreed to a number of demands.

Activists with the group the Baltimore Bloc gathered in the upper galley area Wednesday night as city council members were preparing to vote on Davis' confirmation. They chanted, "All night, all day, we will fight for Freddie Gray!" recalling Gray, a black man who died in April after an injury he sustained while in police custody. The six police officers involved in Gray's death are in early preparations for each of their criminal trials.

But just the trials aren't enough for many activists who were pushed to action after Gray's death. They want to see real reforms in the Baltimore Police Department, and in other departments around the country. A spokesperson for the Baltimore Bloc told NBC Wednesday that the group wants officers to wear badges and name tags, and that protesters want to be able to protest in larger areas for longer periods of time than "would be normally tolerated." And in the interest of protecting the right to protest, they want police be "more tolerant of minor law breaking [such as the throwing of water bottles] when deciding whether to escalate the use of force."

At about 3:52 a.m., Baltimore police released this statement on Facebook once the remaining protesters had been arrested:

At about 4 a.m., an Associated Press reporter who stood outside the building said several demonstrators were led outside in plastic cuffs and loaded into transport vehicles. Some of the remaining protesters outside shouted at the officers, "It is our duty to fight for our freedom! We have nothing to lose but our chains!"

Many of the activists involved were students. They said they opposed the permanent appointment of Davis, and that they weren't given any chance for input. Organizer Kwame Rose, who had been with the group for hours but moved outside when police gave the first warnings, said the group felt that politicians ignored them:

The politicians, they failed us today. All (Davis) had to do was come upstairs for ten minutes. All we wanted was for the commissioner to meet the people he's attacking. And now he's attacking us again.

After the subcommittee vote, Davis called Wednesday night's protest an "act of civil disobedience" that "is just part of this moment":

It's all part of the healing process. The fact that this occurred isn't upsetting. It's just part of where the city is right now. I understand where they are. I understand their frustration.

It's unclear whether Davis intends to meet with protesters to discuss their demands for better policing.