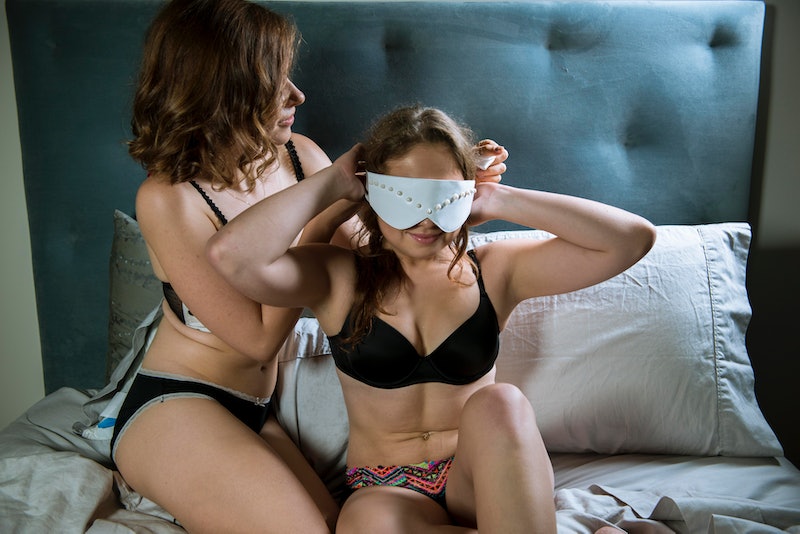 Halloween is the one night of the year where it’s socially acceptable to be (almost) anyone or anything. Of course, you could totally go to work rocking a Princess Leia costume any other day of the year, but on Halloween your boss is less likely to suggest you seek therapy. Halloween is your big chance to be the person that you only fantasize about being. You can walk into a party dressed as Princess Leia, leave with Han Solo, then let the role-playing with your partner continue into the wee hours of the night. In fact, according to a new survey by LifeStyles condoms, Millennials are totally into role-playing, whether it’s Halloween or any other day of the year.

Over 5,000 men and women between the ages of 18 and 34, were kind enough to answer LifeStyles questions about their sexual behaviors, condom use, attitude toward sex, and their sexual preferences. All that info was piled into the 2015 SKYN Condoms Millennial Sex Survey, and it found that when it comes to role-playing millennials are really into exploring their fantasies while donning a character that they only get to be in their dreams.

Are you into role-play, too? If so, you're totally not alone. Here are six facts about Millennials and role-playing.

1. The Favorite Role-Play Scenario For Couples Is Being Strangers

Of those who participated in the survey, 17 percent of them put role-playing as strangers as their most favorite. Having done this, I can tell you there’s nothing more fun than meeting your partner somewhere and pretending to be total strangers. My last partner and I always did this when we traveled together. We’d pretend to be strangers for most of a flight, then agree to share a cab back the hotel.

2. Strippers And School Girls Are The Most Common Characters

For 15 percent of millennials, having a female partner dress as a stripper was the most common character, with school girl, at 13 percent, being second in line. But I like to believe that had the study delved in a little deeper, it would have found Princess Leia on the list eventually. I mean, I can’t be the only one.

3. Fifty Shades Of Grey Is A Favorite Role-Play Scenario For Some

Although the study doesn’t say exactly what is being acted out in this role-play scenario, it was found that 12 percent of millennials found inspiration in pretending to be Anastasia and Christian. I’m really hoping this means that there is a secret Red Room of Pain in the homes of this 12 percent.

Not that we should be even remotely surprised but, at 18 percent, men prefer that their partner do the whole school girl thing during role-play. But before we judge these men and say it just further infantilizes women, we need to take a step back and realize that in fantasies, as long as both parties consent, anything goes.

5. Women Are All About The Strangers Scenario

Not only do 17 percent of millennial couples favor role-playing as strangers, but 20 percent of women who were surveyed prefer it above all other forms of role-play, too. For the ladies, second on line to that was that whole Fifty Shades of Grey thing at 17 percent.

6. Saturday Night Is The Biggest Night For Sex

Although you may be trying to figure out how this has to do with role-play, it totally does, at least this year. According to the survey 19 percent of millennials report that Saturday night is the night where the sexy times are most likely to happen, followed by Friday night, at 11 percent.

But my point? Halloween is on a Saturday this year. What this means for those who love to role-play during sex is that Halloween this year is your chance to really take your role-playing to a whole new level. You could be a sexy donut, or an Ewok, or maybe even Santa! Personally, I'm hoping there's at least one Han Solo out there who’s looking for a hot princess from Alderaan. I’ll have danish on the sides of my head, so that has to be a selling point for someone.

More like this
35 Sexy Texts To Send Your Partner
By Griffin Wynne and Carolyn Steber
GIRLI & Q Fell In Love At A Skatepark & Never Looked Back
By Jessica Morgan
Are Gemini & Leo Compatible In A Relationship?
By Kristine Fellizar
13 Summer Solstice Quotes To Celebrate The Longest Day Of The Year
By Sadie Trombetta
Get Even More From Bustle — Sign Up For The Newsletter