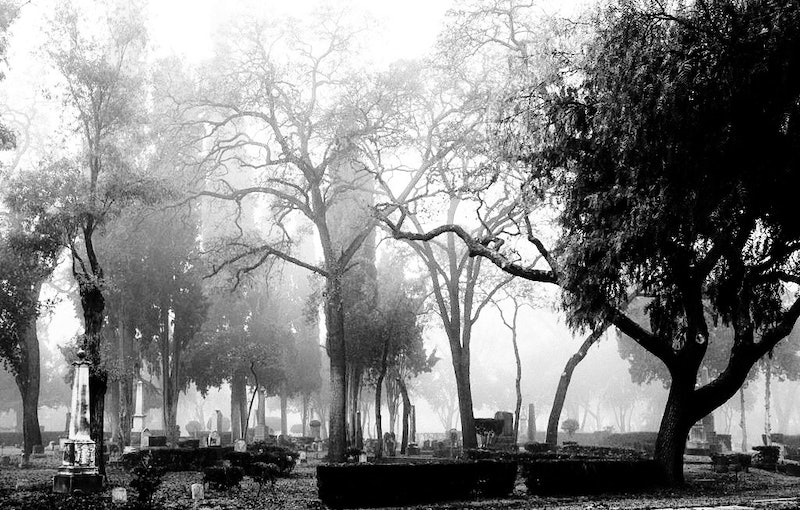 Warning: We're about to wade into some morbid and saddening territory. Presumably you already know this, given that you just clicked on a headline reading "The 6 Weirdest Deaths In the Past 10 Years" — but it bears repeating, just so we're all prepared for what lies ahead. Feel free to back out now.

Still here? Then let's carry on. As I mentioned, we're going to be talking about some of the weirdest deaths that have occurred over the past decade today, and believe you me, we've got some doozies here.

We've already established that I am the kind of person who already knows that there is a Wikipedia page for List of Unusual Deaths. However, I did learn something new when I started researching this piece: There is also a Category page on Wikipedia devoted to Death-Related Lists. And you guys? I have a feeling it's the Pandora's box of death. Some of the lists are to be expected — List of Serial Killers Before 1900, say, or List of People by Cause of Death — but others are… strangely specific. List of Australian Rules Footballers Who Died During Their Playing Careers, for example — I had no idea enough Australian rules footballers had died during their playing careers to warrant their own list. Same goes for List of Cricketers Who Were Killed During Military Service. Just, y'know... FYI.

None of this is meant to minimize death by any means, of course; one of the things we always have to keep in mind when discussing topics like this is that we're talking about real people here — people who lived and died, some of whom still have surviving friends and loved ones. This is especially true for more recent deaths, which is why I set some rules for this piece going into it: First, no intentional self-inflicted deaths; second, no children; and third, no homicides. Deaths that don't fall under those three categories are no less tragic, especially if they are untimely — but there are also some places I'm just not willing to go out of respect for these peoples' memories. I also set one final rule, which was to avoid covering any of the stories we've previously covered.

So here we go: A look at six of the weirdest deaths in the past 10 years.

Don't say I didn't warn you.

We're all familiar with the fact that chickens can live after their heads have been cut off (sometimes for 18 months at a time) — but did you know that cobras can survive decapitation, too? It's true. In 2014, chef Peng Fan of China's Guandong Province died after being bitten by the severed head of a cobra. Peng had cut the head off the snake 20 minutes earlier in order to dice its body for soup; however, when he went to dispose of the head, it bit him. Unfortunately anti-venom was not able to be provided in time, and Peng died from the bite.

I'd like to preface this one by noting that there's nothing wrong with taking selfies in general. In fact, selfies can be pretty empowering. However, there's a time and a place for selfie-taking, and unfortunately, a lot of people seem not to take this very important factor into account when they whip out their phones and start snapping (see: shark attacks versus selfie deaths so far in 2015). In 2014, for example, a 21-year-old from Spain climbed atop a parked wagon at Andujar train station, intending to take a selfie while he was up there; but in the attempt, he touched a high-voltage wire he and his friends had assumed wasn't actually electrified. 35,000 volts discharged into his body, throwing him from the train and killing him.

Other common selfie-related deaths include falling from great heights while attempting to snap pictures, as well as posing with guns.

Many examples of spontaneous human combustion have been debunked over the years, but the 2011 death of 76-year-old Michael Faherty in Galway, Ireland is not one of them. According to the Telegraph, Faherty “was found lying face down near an open fire in his living room.” There was no other damage anywhere in the house; neither traces of an accelerant nor signs of foul play were found; and pathologist Professor Grace Callagy determined that Faherty had not died from heart failure. West Galway coroner Dr. Kieran McLoughlin eventually concluded, “This fire was thoroughly investigated and I'm left with the conclusion that this fits into the category of spontaneous human combustion, for which there is no adequate explanation.”

Cockfighting? No good. Seriously — pitting anyone or anything against one another and forcing them to fight to the death is inhumane, whether we're talking about people or animals. As such, we shouldn't really need another reason to, y'know, not ever participate in cockfighting ever — but just in case we do, here's another one: In 2011, Jose Luis Ochoa died after being stabbed in the leg at a cockfight in California. The wound came from one of the birds, who had had a knife attached to one of its limbs for the fight.

Everything about this is bad. Everything.

I'm cheating a little with this one — it happened in 2004, putting it just slightly outside the past decade — but it's still worth examining. In 2004, Philip Quinn of Kent, Wash. died after placing a lava lamp on a hot stove top. The heating of the lamp caused it to explode; the explosion also sent a shard of glass into Quinn's heart, killing him. Why Quinn may have been heating the lamp in the first place has never been fully explained, but his is believed to be the only death in history to have been caused by a lava lamp.

For me, the death of Gareth Williams remains one of the most puzzling deaths of all time. In August of 2010, his remains were found in the bathroom of his flat in London zipped inside a duffel bag that was padlocked from the outside. Williams, a mathematician, was employed by the Government Communications Headquarters; at the time, he had also been second to MI6.

His death was initially treated as a homicide; after further investigation, however, it was ruled an accident.

More like this
The Guide To “Witches Stairs” & Why They’re Actually Great For Small Spaces
By Emma Garza
5 Ways To Stand In Solidarity With Women In America From The UK
By Sophie McEvoy
How To Fight For Reproductive Rights, Based On How Much Time You Have
By Courtney Young
On TikTok, Orange Wine Is The Varietal Of The Summer
By Madeleine Aggeler
Get Even More From Bustle — Sign Up For The Newsletter