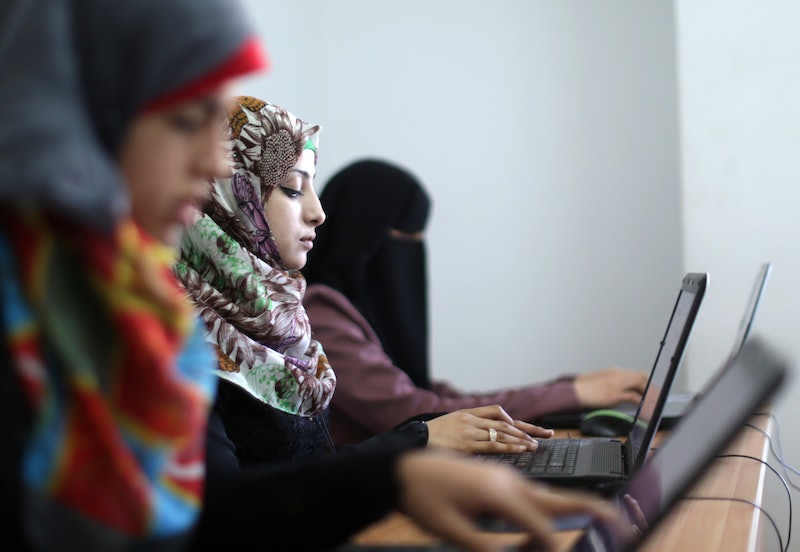 It's been another big week for news. Democrats officially have a debate under their belt, GOP candidates are panicking about who will and won't make it to their next debate, Planned Parenthood is going to stop taking reimbursements for fetal tissue donations, Playboy is no longer publishing all-nude photos... how to keep up?! I've sifted through the news, op-eds, and important essays that have come out this week to find some great reads that are of interest to feminists that we can all catch up on over the weekend. There's a lot happening internationally as well as in the U.S. that affects women, and certain stories really stood out as worthwhile reading.

This week, I've included a couple of stories with an international focus to help keep you up to the date on the status of women abroad. There were also a couple of excellent pieces about feminist issues in the U.S., including the very hot-button topic of gun control and gun safety (which, of course, came up in the Democratic debate). From the absence of female top chefs to bra holsters for handguns, here are some of the most pertinent stories that feminists will want to read this week.

Nina Bahadur published an interview and profile in the Huffington Post this week about her former college classmate, Lindy Li, who is a mere 24 years old and already running for U.S. congress. Li is running for congress in Pennsylvania, and told Bahadur that as a woman running for political office, she's noticed that "people have a strange obsession with my eyebrows. I would really love it if you could give me some feedback on my ideas."

Li discusses the issue of trolls online, her lifelong dream of serving in congress, and the issues she would focus on if elected. A great and inspiring political read (which are in no great supply these days!).

On Thursday, Harper's published a longform essay by Sarah Dohrmann that details the subject of sex and prostitution in Morocco. Investigating the country's attitude towards sex for sale, Dohrmann quickly learned that any number of seemingly small signals could indicate that a woman is a prostitute. Dohrman was told that anything from wearing lipstick, to smoking a cigarette, to merely being seen with a man were potential indicators that a woman is a prostitute in Morocco. This is a fascinating in-depth exploration of this society's relationship with sex, and the complicated factors that emerge as a result. Dohrman thoughtfully addressed domestic violence, sex work, and female friendship, making this a worthwhile read for any feminist this week.

Where Are All The Great Female Chefs?

This is a question I've wondered myself. When we think about cooking in the home, our minds most likely jump to mom or grandma, so why are so many renowned restaurant chefs men? Claudia McNeilly explored this question for Broadly this week, and discussed the ways in which the world of professional cooking has not been an easy one for women. McNeilly explains that female chefs rarely receive the accolades given to their male counterparts, citing a statistic that women accounted for less than 1 percent of Michelin starred chefs in 2014. McNeilly spoke with several female chefs who confirmed that professional kitchens are tough for women, and their stories are definitely worth a read.

Even now that Planned Parenthood has stated it will no longer accept reimbursements for its fetal tissue donation program, House Oversight Chairman Jason Chaffetz, a Republican from Utah, has stated that investigations into Planned Parenthood should continue. MSNBC reported ths week that Chaffetz is in possession of allegedly unedited versions of the sting videos released by an anti-abortion group this summer. This latest saga in the attacks against Planned Parenthood is a must-read.

A prominent Argentine trans* activist, Diana Sacayan, was found dead in her Buenos Aires apartment on Wednesday. The Guardian reports that her body showed signs of violence, making Sacayan's tragic death the third violent killing of a trans* person in Argentina this month. Argentina's president Cristina Fernandez de Kirchner has called on police to solve Sacayan's. Argentina allows citizens to officially change their gender on government documents, and also has one of the highest trans* murder rates in the world. Sacayan's murder was discovered only days after thousands of women marched in Mar del Plata, Argentina for women's rights.

A Purse Is No Place For A Gun

The Trace publishing an article this week about the rise in concealed carry holsters specifically marketed to women. A fashion show put on a at a VFW in Fayetteville, North Carolina last month showcased bra holsters, corset holsters, and thigh holsters. Writer Jennifer Mascia also noted the rise in purses that contain a pocket intended to hold a handgun. Mascia cited experts who have stated unequivocally that carrying a gun in a handbag is extremely dangerous and violates the accepted safety practice of keeping a firearm on your body. Mascia details several recent incidents that resulted in injury or death related to firearms concealed in purses; this dangerous practice that retailers are promoting with their products is something we should all be aware of.