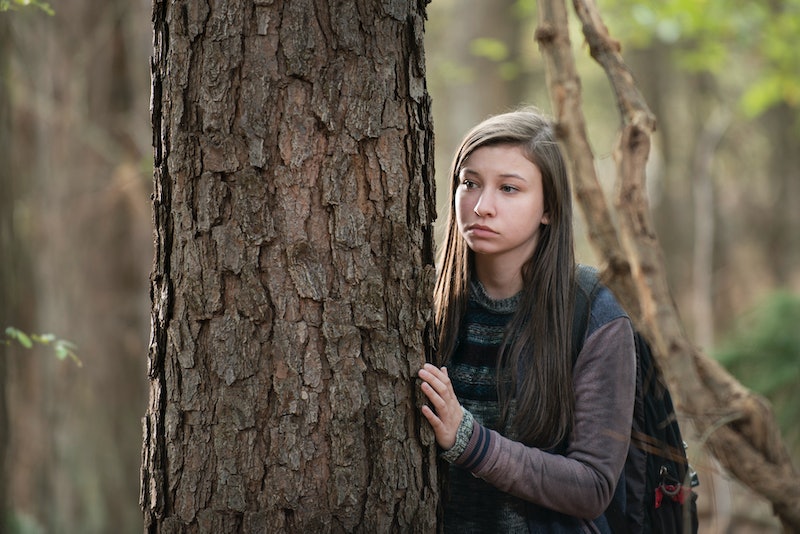 The Walking Dead makes good use of pop culture and literary references, but the title of Sunday's episode is a bit of a stumper. What does "JSS" mean on The Walking Dead ? While that sounds like some kind of computer programming language, I don't think that's what it translates to on this series.

In the sneak peek for the episode that was shown during The Talking Dead, we saw Enid write these letters on a car window as she hit from oncoming Walkers. However, she didn't write them backwards so that others could read on the outside. They were facing inward, for her to read. Was that deliberate? What does it mean? I don't know any codes that would translate "JSS" to "911" or "SOS" or any other recognizable call for help.

Enid has been mysterious from the start. She was found alone and brought to Alexandria. She doesn't think that they belong inside the walls of the Alexandria Safe-Zone. Is she a mole? Was she the one blowing that dang horn? Has she seen even more terrible things than the rest of the survivors? The fact that the episode title is related to one of her actions means that we're finally going to learn more about Enid on The Walking Dead, so let's start with this first mystery.

One person IRL who had these initials is this American impressionist. John Singer Sargent was known for his murals, watercolors, and most prominently for his portraits. While the Alexandria Safe-Zones does create video portraits of its residents, I don't think there's a connection — especially considering how isolated Enid is from the rest of the community. Still, it would be interesting to see a community or a group on The Walking Dead who uses a dead artist as a guide or code. A Caravaggio painting was featured in the episode "Slabtown" last season, after all.

I mean... I don't know. I know that I talk a lot about religious imagery on this show, but there is a character coming on the show whose nickname is Jesus — Paul Monroe. Writer Troy L. Smith from the Northeast Ohio Media Group also speculated that JSS could stand for this character, but also noted that Paul Monroe isn't scheduled to show up for several weeks. There is also a character named Jessie, so we may be totally off with this one.

Multiple Reddit users have speculated that JSS could be a catchphrase such as "Just Stay Still," "Just Stay Safe," or even "Just Start Shooting." In the Season 5 TWD finale, the Wolf told Morgan to "just be still" — which loosely connects Enid to the wolves if you subscribe to that theory.

Something To Do With Enid's Mother

Enid talked briefly about her mother in her heart to hearts with Carl. We know that Enid carries her mother's knife, and asked Carl if it matters what happens to her. Could she be alive?