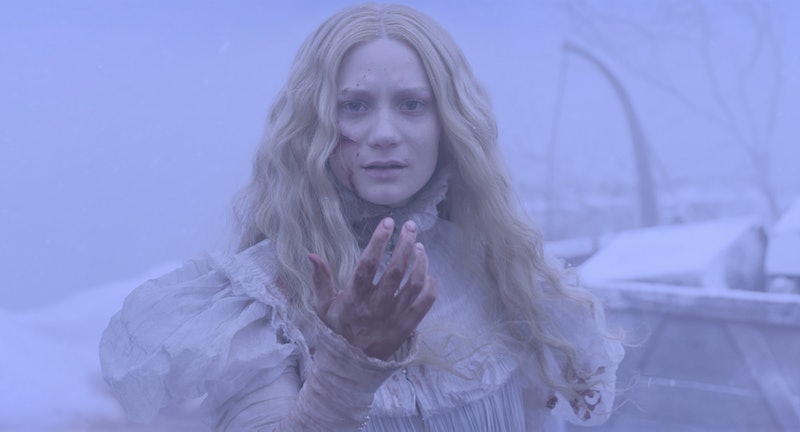 Despite the beauty inherent in that image above, don't be fooled: Crimson Peak isn't simply a haunting, beautiful, gothic tale. It's also fittingly brutal. And in the final fight scene in Crimson Peak , between Jessica Chastain's Lucille and Mia Wasikowska's Edith, that brutality comes to a head and proves an extremely important point, while we're at it. Despite the fact that Tom Hiddleston fans (myself included) have billed this film as the next big "Tom Hiddleston movie," that title isn't exactly fitting once you've seen how the plot unwinds. Major movie spoilers ahead, naturally.

You see, conventional movie wisdom would suggest that in this tale where girl meets dashingly handsome romantic man, marries said man, and moves into a haunted house with his dashingly beautiful and entirely suspicious sister, the dude in this equation is the hero. He's devastatingly good looking. He eventually overturns his loyalty to his sister to protect his new bride from certain death. He charges in to set everything right when his sister tries to kill the woman he loves. But after all that, dear Thomas Sharpe (Hiddleston) fails and is killed by his sister Lucille. Thomas is taken out of the action for the final resolution of the film while Charlie Hunnam's could-be alternate hero writhes around in the basement with multiple stab wounds. There is no guy gunning to resolve the film's biggest conflict: It's all up to the two wiley, headstrong women at the heart of the film's plot.

And after all, isn't that how this scene should play out? Thomas reveals that he was coaxed into his murderous plan of wedding and killing women for their money so he and his sister could carry on their incestuous relationship. Lucille appears to be the ringleader, therefore, Edith's opposition to this plan is far more of Lucille's problem to quash.

And Edith is the one being haunted by the ghosts of Thomas' dead wives and unraveling the mystery of the man she's subsequently falling for. Fighting her way out is her battle, not her dastardly husband's nor her childhood sweetheart's (Hunnam). It's only right that, unlike the outcome of almost any other gothic romance that's ever made it to the big screen, Lucille and Edith are the ones who settle this conflict.

That alone, could have earned my ardent respect, but Guillermo Del Toro's film takes the concept a step further by unleashing relentless brutality on the lengthy fight scene.

When Lucille first goes after Edith, she attempts to stop Edith from using the elevator by slicing up her hand while Edith crushes Lucille's bones (audibly) in the elevator door. This scene doesn't slow either woman down, nor does it lessen her rage, and not a single shot seems focused on showing either woman in a desirable, "sexy" sort of pain (think many scenes from Kill Bill). There's no sex here; it's all anger and passion.

Once the two women descend down into the basement, it's Edith who does the rescuing of Hunnam's injured doctor when she moves him out of harm's way while Lucille pulls a massive cleaver out of her secret hiding place in the floor. From there, the two women rush out in the snow, which is crimson from the red clay of Crimson Peak seeping up through the snow. It's as if they're fighting in a field of blood.

Edith is bloodied and bruised; Lucille's hair is in clumped strands all over her face. The only thing at stake here is survival. There's no sense that the actresses went back to hair and makeup before continuing their fight scene: They are down in the muck.

And when Edith finally wins, she takes Lucille out with the brutality of a woman whose life and love were just ruined by this beguiling antagonist — consider how much blunt force it would take to murder another human with nothing more than a shovel, and you'll get an idea of just how unrelenting this scene really is.

In the end, Edith wins. She isn't rescued, she isn't assisted. She is the victor and she's limping back towards her life, not into the arms of a man who'll make it all OK. If anything, Edith is the one who saves Thomas, when she caresses his ghost and sets his soul free with her gesture of love.

It's kind of insane to me that a film bringing these two female characters to the forefront of their own story in the final moments is something we need to celebrate. I would hope that we could simply expect for films to treat their female characters this way. But with any luck, Crimson Peak can at least help to lead the charge into the necessary future.