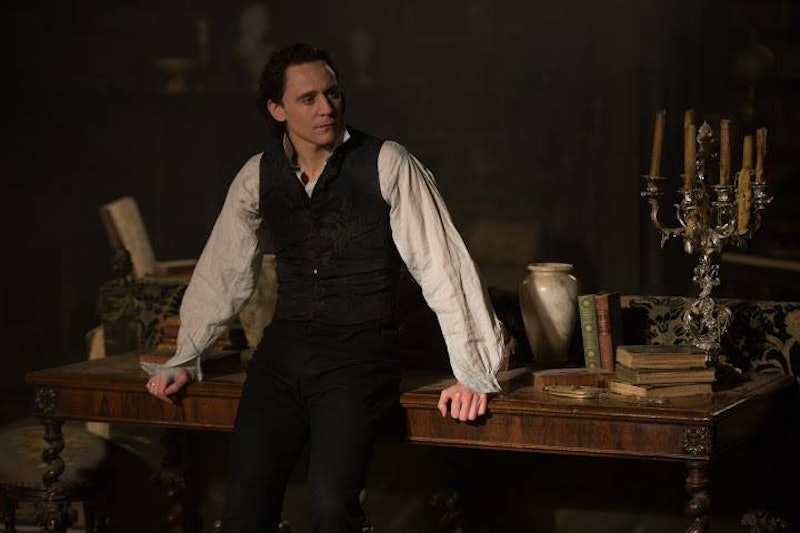 Crimson Peak is coming, which, for Hiddlestoners — aka fans of Tom Hiddleston — means one thing, and one thing only: it's time to go to the movies. In Crimson Peak , Hiddleston takes his heartthrob status to the next level, playing a devilishly charming young man, Thomas Sharpe, who sweeps a young author, Edith Cushing (Mia Wasikowska) off her feet, marries her and takes her to his haunted house of horrors. Based on the premise, it's clear Hiddleston very much enjoys playing the evil seducer role. Lucky for him, Hiddlestoners are more than happy to be equal parts turned on and disturbed by his on screen persona. After all, they're no stranger to his dark side; it was by playing the evil god Loki that Hiddleston became a household name and international sex symbol. Fans have been waiting two years to see the actor on the big screen, as since the release of Thor: The Dark World, Hiddleston has been MIA from wide-releases, not including a small part in Muppets Most Wanted and a lead in the limited-release Only Lovers Left Alive. Finally, with Crimson Peak , Tom Hiddleston fans have a movie they deserve.

No doubt HIddlestoners will rejoice as they rush to see Crimson Peak. What could be better for a fan of the actor than a Gothic Romance with him as the lead? (Note: all Hiddlestoners should look up the star saying the phrase "Gothic romance," trust me.) Here are the five reasons why Tom Hiddleston fans should get excited for Crimson Peak.

A Tom Hiddleston movie means a Tom Hiddleston press tour, which means interviews aplenty! What Hiddlestoner doesn't spend hours watching clips of the star's interviews on the Internet? And, if you're so dedicated that you've already seen them all, it's time to get excited for a whole new batch coming your way!

The Part Was Written For Hiddleston

After Benedict Cumberbatch, who was originally signed on to play the part of Thomas Sharpe in Crimson Peak, dropped out of the movie, writer-director Guillermo del Toro re-worked the script specifically for Hiddleston and asked him to be in the film. The actor told Yahoo!, "There was no possible way I was going to say no."

In Crimson Peak, Thomas Sharpe sweeps Edith off her feet after meeting her at a dance. Sure, it's not the pelvic thrusting some Hiddlestoners might prefer, but I think it's safe to say that a dancing Hiddleston is a sexy Hiddleston.

He Plays The Love Interest

Thomas Sharpe may walk the line between good and evil in Crimson Peak, but one thing's for sure: he's the leading man in the romantic storyline of the film. Finally, Hiddlestoners will get to watch Hiddleston fall in love and pursue something other than revenge and power of the universe. Most importantly: fans can pretend that he's seducing them, and that is worth everything.

Oh, you read that correctly, Hiddlestoners. Naked Tom Hiddleston is coming your way courtesy of Crimson Peak! The gothic romance features a sex scene that (gasp!) promises to give fans a peek at Hiddleston's naked backside. Hiddleston's nudity in Crimson Peak isn't only noteworthy because he's freakin' Tom Hiddleston — it's also significant in that his is the main nudity in the film, as opposed to the more traditional female nudity that's all the rage.

"It's so often in movies that women are more naked than men and I think that's unfair. And, we wanted to sort of redress the balance. And it was really important for us that Edith was calling the shots, that she is the strongest character, she's a strong woman and she's going to dictate how that goes down," Hiddleston told E! News.

Seriously, the only way this man could be more perfect was if he came with chocolate.