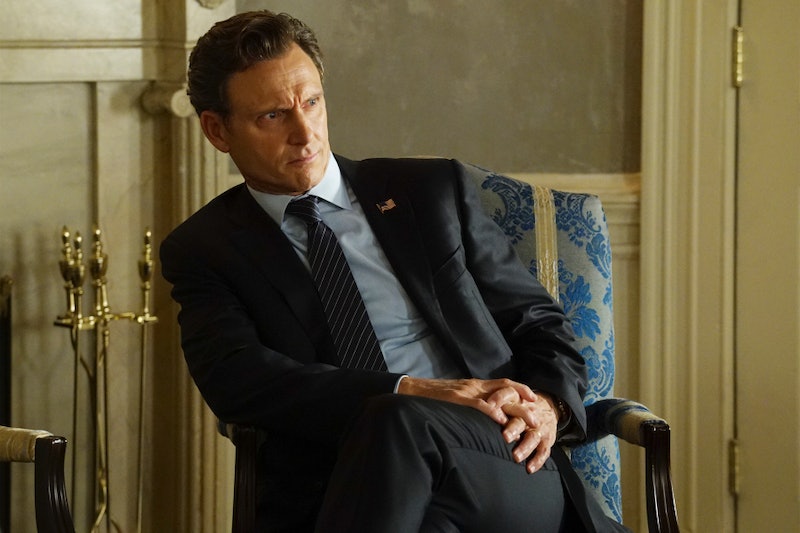 President Fitz is in a lot of really hot water on Scandal, and not just because he's dating Olivia Pope. OK, so it's mostly because he's dating Olivia Pope, but there's something else that's plaguing him: His support of the Brandon Bill. The senate is pretty pissed off that Fitz wants to get it passed — so much so that they're planning to try to impeach him for it. Fitz isn't usually one to back down from a challenge, though, and so far, he seems totally unwilling to play their game. So what is the Brandon Bill, other than the thing that could get Fitz removed from office?

In case you need a refresher — because it was something that Scandal hasn't brought up much since last season — I have you covered. Remember in Season 4 when a young black man was gunned down by police, bringing a hefty dose of reality into Shondaland? The Brandon Bill is a bill that would enforce laws on police to make sure they don't abuse their power, aka the bill that Susan Ross took forever to read before signing. She pointed out that it needed some work, and now, it's being brought back to the table. Which brings us to now.

Fitz is trying to do "the right thing" these days, and the right thing would be seeing the Brandon Bill through and making sure it gets passed. Unfortunately, though, it'd be in Fitz's best interest to kill it since it would keep him in the presidency. But at this point, what does he have to lose? The entire world knows he cheated on his wife with Olivia, and he's lost a lot of favor with the American people... in his second term. The Brandon Bill could save lives, and Fitz seems truly over the idea of being president. Maybe he's willing to stand his ground and let his days as POTUS go?

Either way, it'll be really disappointing if Fitz gives in — not that I think he will. Besides, he has Abby, and if anyone can salvage the situation, it's her. But whatever happens, it's not going to happen without a fight... and probably with Cyrus getting peeved. Well, more peeved than he already is.

Don't let me down this time, Fitz. If a bill like that isn't passed in the real United States, I'd like to see it happen in TV Washington DC instead to know it's possible.

More like this
Are John Legend & Kanye West Still Friends? The Singer’s Latest Update Is Candid
By Brad Witter
Christina Aguilera Took A Powerful Stand At Brighton Pride
By Sam Ramsden
'Scream’s Courteney Cox Has Broken A Major Horror Record
By Sophie McEvoy
It’s Official: The UK Is Hosting Eurovision 2023
By Sam Ramsden and Rachel Mantock
Get Even More From Bustle — Sign Up For The Newsletter