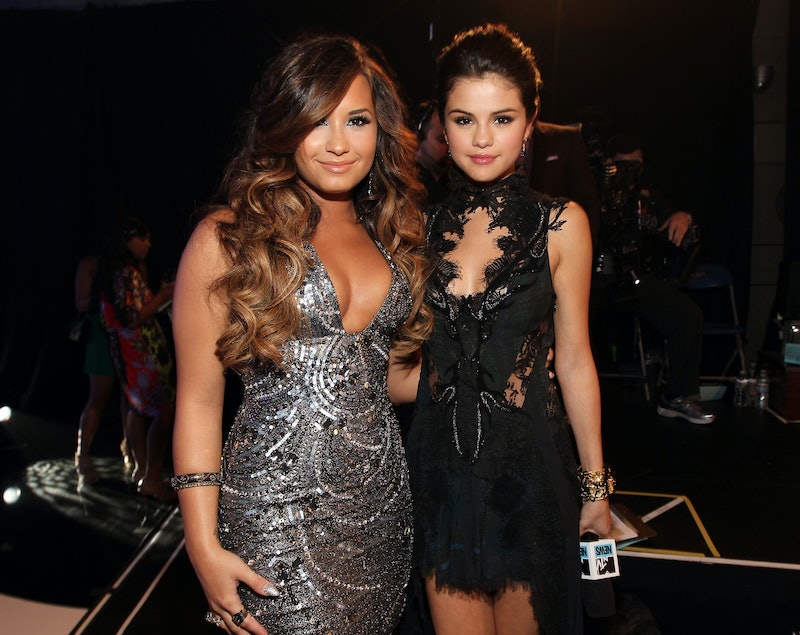 At this point, everybody knows that Demi Lovato and Selena Gomez started their careers together, right? Well, if you didn't, let this be the moment you learn that. Gomez and Lovato got their start both in their careers and in their best friendship during the auditions for Barney & Friends, which they joined as cast members in 2001 and 2002, respectively. Pretty crazy, right? So, when I realized that, a full 14 years later, they'd put out albums just a week apart — Gomez's Revival followed by Lovato's Confident — I got curious about whether the rest of their careers mirrored each other at all. After all, they both had to navigate that extremely tricky expanse that all child stars go through when they move into adulthood, so maybe they'd used some of the same techniques?

Spoiler alert: they have, and they did, and I was right, and all hail me. Both these ladies have proven themselves to be incredibly successful businesswomen, expanding their brands, honing their talents, and above all, reliably and consistently churning out work. Their best-friendship may have dimmed a bit over the years, but, with the amount that these two have in common, I have no doubt their paths will cross again in the future. For now, we'll have to be satisfied with all the ways their careers have overlapped — take a look.

Like I said, these two met on Barney & Friends, where Gomez played Gianna and Lovato played Angela.

In the same year, 2007, Lovato and Gomez both got their big breaks via the Disney Channel. Lovato did their short series As The Bell Rings, then moved on to the TV movie Camp Rock and the series Sonny With A Chance, while Gomez was cast in The Wizards of Waverly Place, all projects that would make them household names.

Once again, perfectly in step, both girls started moving more seriously toward music in 2008, with Selena Gomez signing a contract with Hollywood Records as Selena Gomez & The Scene, and Demi Lovato releasing her first album — not including the Camp Rock soundtrack, of course — Don't Forget. Both girls also collaborated with The Jonas Brothers: Lovato opened for them on their tour in advance of her album's release, and Gomez appeared in their video for "Burnin' Up." It's crucial to start making important friends in the industry you're interested in entering, and these ladies both seemed to know that!

Whether it was movies, soundtracks, tours, albums, television shows, charity appearances, or anything else, Gomez and Lovato were killing it. They were everywhere and could do no wrong. Their careers were peaking, and their names were on everybody's lips.

Both young women began their most serious relationships this year — Lovato with Wilmer Valderrama, and Gomez with Justin Bieber. I'm not saying that it was calculated this way, but seeing the women in romantic relationships helped jar some of their fans out of the habit of seeing them as children.This was also the year that Lovato's struggles with addiction came to public light when she entered rehab, which made this year serious for Lovato in a different way.

Not that either woman wasn't doing anything between 2010 and 2013, but they did dip below the radar a bit, specifically in the music world. (Which... honestly isn't that surprising, given how complicated it is to move through adolescence in the normal world, let alone as an A-List millionaire.) But both Lovato and Gomez burst back onto the scene in 2013 with a career resurgence featuring more mature material. Gomez's Stars Dance featured songs like "Come & Get It," with sultry videos pressing her more adult image to the forefront, and Lovato's album Demi was also in a new vein, with open, honest material addressing her struggles. Lovato had also dipped a toe into that pool in 2011, with Unbroken, but this is when she really started embracing her role as a role model to younger women facing the same struggles she did.

2015: Truly Finding Themselves... Even If That's Separately

I think, for both women, their 2013 album were about looking for themselves, and their 2015 albums are to show us what they've found. It's even right there in the names — Revival and Confident. These are women (not children, not young women!) who know what they want, and how they want to present themselves. And, in both cases, it only makes me more excited to follow their careers going forward.

At the end of the day, I was pretty shocked at how similar the career trajectories of these two have been, but, the more I think about it, the less surprised I am. There aren't that many ways to come out of child stardom as a complete person; there's a pretty strict script you have to stick to, and both of these ladies have managed beautifully in their own unique ways.