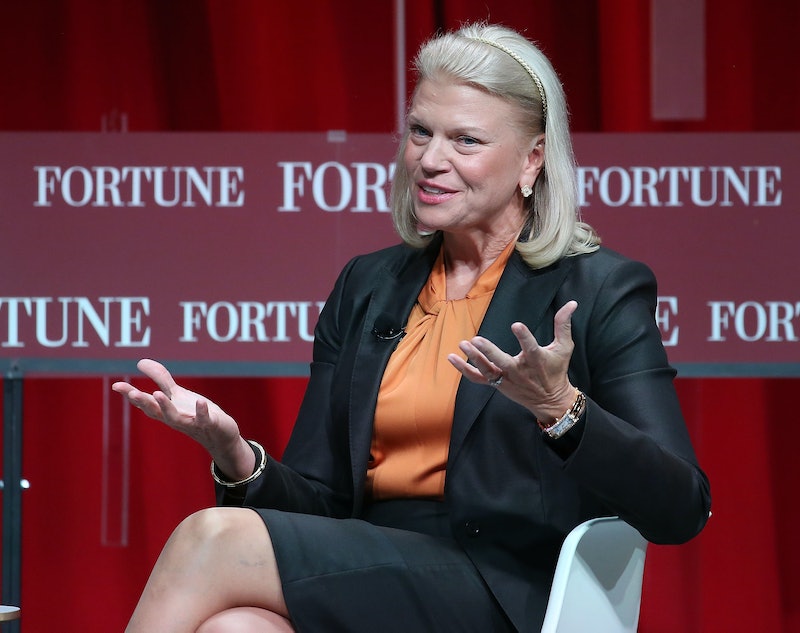 The most common word used by CEOs in Fortune's 2015 Most Powerful Women Summit interviews was "think" — as in, "I think it is imperative that the cost of one’s cuts be sustainable." Linguists have called this construction "tentative speech" and cited it as one of several communication habits of women that signal submissiveness. But does it? Or do women's speech habits have other meanings that we're simply not understanding?

According to Fortune, women used the word "think" 101 times during the conference's CEO interviews in a variety of contexts. The example above was from Mondelez International CEO Irene Rosenfeld's discussion of company budgeting, and Xerox CEO Ursula Burns used the word in the sentence, “If you think about portable water, think about health and health distribution." IBM CEO Ginni Rometty provided an example of another use: "I think of that question differently."

Rather than using "tentative speech" to qualify their assertions, Quantified Communications CEO Noah Zandan argues at Fortune that these powerful women used it in ways that were, well, powerful. "Burns’ use of the word 'think' in a more hypothetical sense indicates that her scope of awareness expands beyond her own company’s inner workings," he says. And by saying "think," Rometty "indicates that she has actively listened to his question and processed it carefully in order to answer accurately." Watch her interview below.

Ultimately, Zandan concludes, these women were using "think" not to express self-doubt but to convey thoughtfulness. They were showing that they had thought through the issues they were discussing before reaching conclusions. And that use of "think" functions to establish credibility, not take away from it.

Here are three more commonly misunderstood speech habits of women that don't have the stereotypical meanings we often ascribe to them.

Uptalk — a raised pitch at the end of a sentence as if asking a question — is sometimes considered a sign that women are literally questioning themselves. Indeed, one study found that women use uptalk twice as often as men. However, their reasons may be different than we think: Almost 60 percent of women's uses of uptalk were characteristic of "floor-holding," a rising of intonation to stave off interruption — which makes sense given that women are interrupted more often than men. Another study on the use of uptalk among sorority girls found that, when speaking to a group, sorority leaders used the technique as a way of asking, "Everyone still with me?" Another study on the use of uptalk in Jeopardy, however, found that women used more uptalk as they did better in the game, suggesting that perhaps they were apologizing for their success. While none of these studies arrive at the same conclusion, what's clear is that uptalk means very different things in different contexts.

This habit of lowering your voice to an almost croaking sound is hard to describe, but the video above should give you an idea. Like uptalk, it's usually associated with Valley Girls in particular and women in general. Feminist author and activist Naomi Wolf wrote an article for The Guardian this summer titled "Young women, give up the vocal fry and reclaim your strong female voice," arguing that vocal fry, uptalk, and other speech patterns common among women lead people to take them less seriously. In a rebuttal, writer Erin Riley wrote that people take vocal fry less seriously only because women use it, not because there's anything inherently wrong with that way of speaking itself. Similarly, after radio hosts Alix Spiegel and Lulu Miller received criticism for using vocal fry in the NPR science podcast Invisibilia , Refinery29's Kelsey Miller pointed out, "These are two educated women talking about science. If we're hearing shopping in their voices, maybe that's on us. Maybe they're speaking just fine, and we need to learn how to listen."

Former Google and Apple executive Ellen Petry Leanse recently called on women to stop saying "just," and Jezebel's Tracy Moore chimed in with a longer list of qualifiers not to use like "actually," "am I making sense?" and "sorry." However, linguist Robin Lakoff has a different take on these words: “Rather than being weakeners or signs of fuzziness of mind, as is often said, they create cohesion and coherence between what speaker and hearer together need to accomplish — understanding and sharing," she told New York Magazine. Lakoff mentioned in the same interview that she's suspicious of all the criticism of the way women speak:

With men, we listen for what they're saying, their point, their assertions. Which is what all of us want others to do when we speak... With women, we tend to listen to how they're talking, the words they use, what they emphasize, whether they smile.

In addition to taking the responsibility for listening to women off of listeners, telling women how to speak can make women doubt themselves even when they, like the CEOs at the Most Powerful Women Summit, were employing these verbal habits confidently. "Here I am, thinking that I’m speaking normally and sharing my thoughts on campaign-finance reform or the Greek debt crisis or the politics of marriage, when apparently the only thing that other people are hearing is a passive-aggressive, creaky mash-up of Cher Horowitz, Romy and Michele, and the Plastics," writes Ann Friedman in New York Magazine .

So maybe it's not on women to speak differently. Maybe it's on all of us to listen to what they're saying.