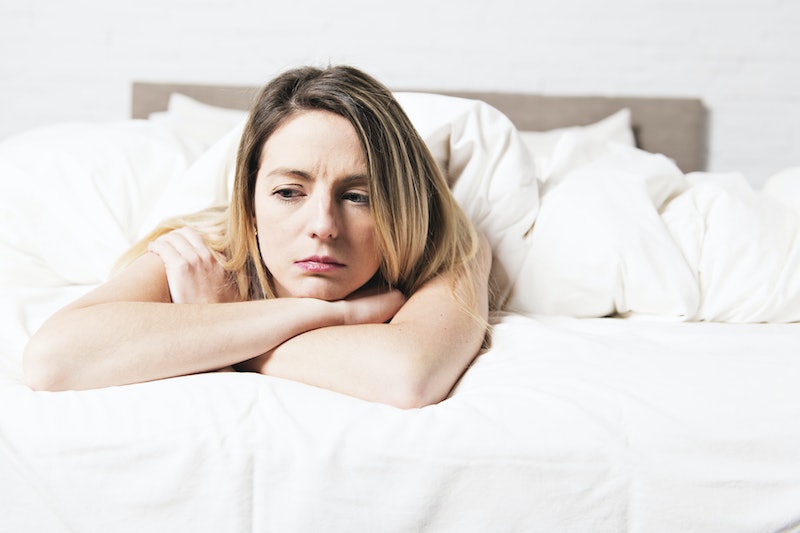 When radio producers Alix Spiegel and Lulu Miller started NPR's science podcast Invisibilia, the two women were immediately bombarded with complaints about their voices. Whether reviewers thought they sounded "like high school girls," "high-pitched and up-talky," or like "vocal fry hell," people had something negative to say, and like the commentary on Hillary Clinton's hair during what was supposed to be a political campaign, their observations had nothing to do with what the podcast hosts were saying.

As Kelsey Miller points out at Refinery29, expectations for women's speaking voices put us in a double-bind. We are told to speak in a lower register to sound more masculine and therefore more authoritative, yet when we do, we are criticized for having vocal fry. And when we don't, well, that's when the "high school girls" comments start flooding in. Miller writes (emphasis mine):

These are two educated women talking about science. If we're hearing shopping in their voices, maybe that's on us. Maybe they're speaking just fine, and we need to learn how to listen.

This was certainly not the first time women have been expected to solve problems that aren't theirs to solve. Along with modulating our speaking voices, we're taught to perform a long list of actions to get people to take us more seriously, stop sexually assaulting us, or understand us. These efforts often amount to very little — because sexism will exist as long as people are sexist, regardless of what we do to avoid being their targets. Here are a few more problems that we count on women to solve but that should really be filed under "That's On Us."

In Lean In, Sheryl Sandberg argues that, while it's not our fault that society has engrained unhelpful behaviors in us like reluctance to speak up in meetings and ask for raises, it is our responsibility to exhibit more traditionally masculine behaviors if we want to get ahead. The problem with this advice is that a) maybe we as a society should not be prizing many "masculine" behaviors and b) when it comes to "leaning in," we are damned if we do and damned if we don't. The manifesto on the website tableflip.club, which spawned the hashtag #tableflip2015, describes this double-bind:

When we try to play by the rules (which we do because we’ve seen what happens to women who don’t) we’re denied opportunities because we aren’t “ready” for them- and we are ALSO denied the things you say we need in order to BE ready... When we try to take a seat at the table like Sheryl said we should, we’re called presumptuous.

Over the past several years, we've been offered the following strategies to avoid being sexually assaulted: steer clear of alcohol, get home before 1 AM, put on our anti-rape faces, paint our nails with drug-detecting polish, and wear hard-to-remove underwear. And then, a huge chunk of us get sexually assaulted anyway. Frankly, it's exhausting. And while I still carry my keys when I'm walking alone, don't take candy from strangers, or whatever the hell else I'm supposed to not do, I shouldn't have to. These precautions may very slightly decrease an individual's chance of being raped, but the only way to make the problem less prevalent overall is to stop people from becoming rapists in the first place. As Know Your IX co-founder and co-director Alexandra Brodsky said of the nail polish that changes color when it touches a drink with a date-rape drug in it:

I really wish that people were funneling all of this ingenuity and funding and interest into new ways to stop people from perpetrating violence, as opposed to trying to personally avoid it so that the predator in the bar rapes someone else.

First of all, it can feel belittling to have our lived experiences of oppression called into question, and second of all, a thing called the Internet exists so that I don't have to assume the role of professor and tell you everything I know about the history of gender. I'm not saying you can't bring up the topic, but at least know the very basics so you don't end up in a "let me Google that for you" situation.

A website called The Womansplainer makes fun of men who ask women ignorant questions about sexism by charging them for services: For $20, the site's creator "will spend no more than ten minutes Googling your question for you. I'll send you a couple articles I find that are helpful." In all seriousness, though, when strangers message me on social media with the question "what is feminism?" I usually direct them to this article from Everyday Feminism (though I'm tempted to reply, "Try Google"). And for questions about racism, a little bird called Tumblr provided me with this "resource post for all the Good White Person ™ s out there."

In all these situations, women are not the problem — so we're tired of the pressure to be the solution. Constantly adjusting our voices can hurt our throats, all this leaning in has got to be bad for our backs, and avoiding all situations in which we could get raped leaves no room for our social lives. It's time we let go of all this pressure to apologize for doing what men do every single day without ever being challenged, blamed, or associated with shopping.