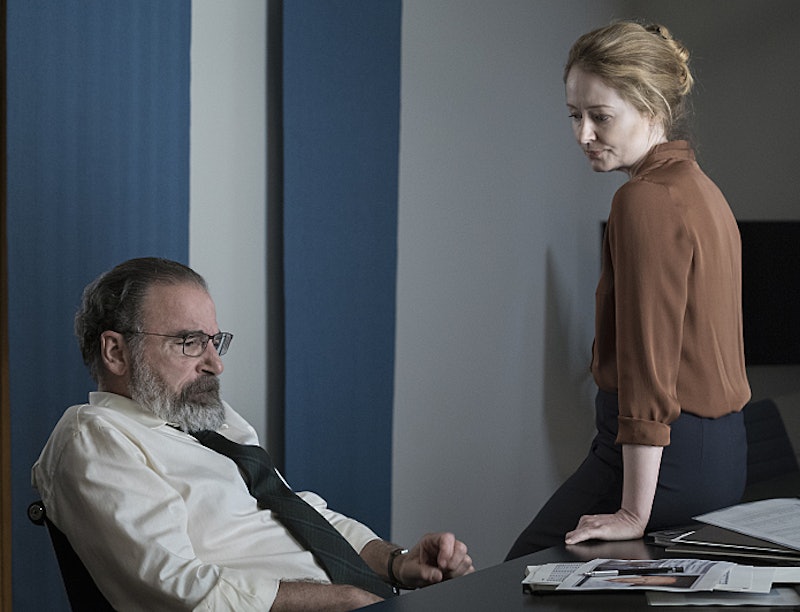 Why Saul, why? Apparently because he is trying everything in his power to be more and more confusing in Homeland Season 5, Saul is sleeping with Allison Carr. Sunday night's episode of the Showtime series revealed that the two CIA associates were romantically involved as they cuddled in bed together at the end of "Super Powers." Normally, this wouldn't be such a big deal, but considering their working relationship and possibly more importantly, Allison's ruthlessness and apparent hatred for Carrie, their relationships both in work and in love could be seriously ruined in major ways.

For one, there's the obvious problem of Allison not losing her job as Berlin station chief after the CIA document leak fiasco. While Saul was originally willing to let Allison take the fall and be sent back to Langley, he changed his mind even after she went behind his back to try and get Saul himself in hot water. Eventually, the U.S. Ambassador to Germany was sent packing back to the States and even Dar Adal stated that Saul must be in a forgiving mood. While it's probable that Allison was right in thinking that Saul would never let Carrie take the blame if she were the one in charge, Saul would also never allow Carrie to just keep her position if she betrayed him in the same vein as Allison. In fact, we already know that Carrie and Saul are in a bad place because he believed Carrie ruined his bid for director and for leaving the CIA. It seems that in this instance, Saul may have let his personal relationship with Allison affect his job, which could lead to serious repercussions if anyone were to realize that.

And therein lies the second major problem. Allison will always use Saul's mentor relationship with Carrie against him. She did it to eventually get her way and keep her station chief job, and she's bound to do it again while she's trying to find Carrie and prove she is Laura's source of the leaked CIA documents. Of course, it will be hugely satisfying to see Allison proven wrong eventually. But what happens when Saul and Allison are on opposing sides when it comes to Carrie's innocence vs. her supposed guilt? There's no way Saul will believe Carrie is the CIA leak, and there's no way he put Carrie's name in Quinn's folder as his next target. What happens to Saul and Allison when those mysteries start to unravel? And what happens to Saul if Allison decides to throw him under the bus for whatever complications arise from these Carrie-related issues?

Then of course there are the many secret missions that Saul has been completing with Dar Adal, like the one they're about to embark on to overthrow a leader in Syria without the consent they need. These kinds of missions could put a wedge between Saul and Allison, or she could use them against him if she were to discover his secret. Of course, there could be some positives. For instance, if Saul could convince Allison that Carrie is innocent, then they could work together to figure out the real CIA leak and who might have ordered the hit on Carrie as well. But for now, all I see are complications in this relationship, and neither Saul nor Allison needs any more of those right now.