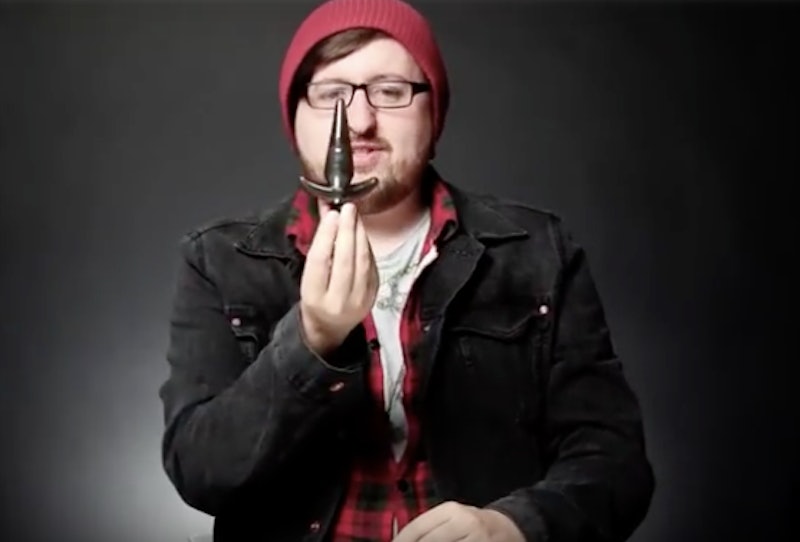 It irks me when men are portrayed in the media as bumbling idiots who don't understand how to do things like change their child's diaper or comprehend mascara. But in this video where a group of confused, hunky Irish men try to explain women's sex toys, it's endearing. Because in their defense, the toys they're reviewing are not all self-explanatory. Their shapes and sizes and functions and noises and movements vary greatly.

It's a misconception that men are more comfortable talking about sex and being sex positive than women are. You'll notice that the giggles and blushing in this video are abundant. The most interesting thing about the video is the men's reactions to the skill of the toys. They were not only intimidated by them, but worried they'd be replaced by them. There was a sense that of relief that women had access to toys that could fully satisfy them, and the men didn't know what to do with that information. They were relieved to know that they didn't have to be fully responsible for satisfying their woman, but at the same time felt insecure about their own natural ability. And in their defense, these are not basic sex toys — they're quite complex, they're new to the market, and incredibly progressive.

So when we think about it, how do we want men to feel about advanced sex toys? Should they worry about being replaced or have be happy that it's not all up to them? Here are some adorable highlights.

Yano what really grinds my gears?

The men were particularly perplexed by the speed settings. They seemed pretty uncomfortable trying to comprehend how a pleasure toy could be reminiscent of a something completely non-sexual.

My milkshake brings all the boys to the yard

A machine that moves so quickly and so swiftly is bound to make the boys uneasy. I mean physically, nobody could never compete.

Who writes this sh*t?!

This marketing company refers to their devices skills as a "licky-loo". I'm siding with him here.

And watch the full video here: