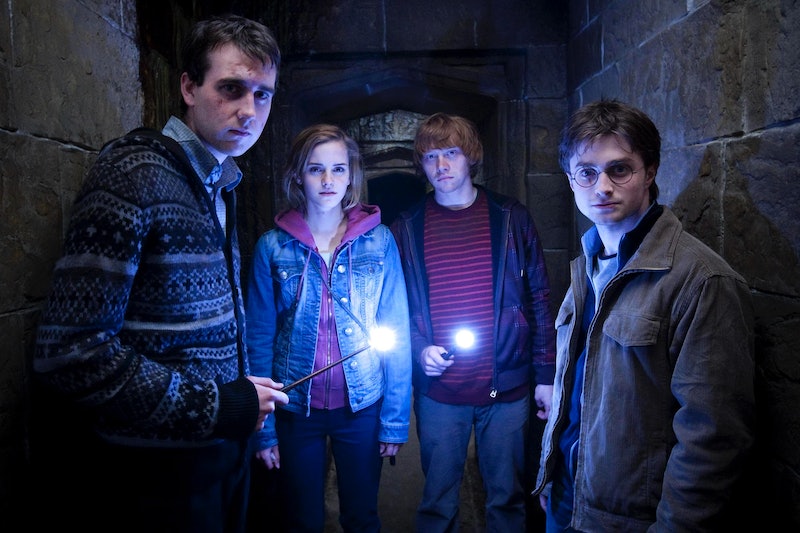 Potterheads know that one of the best things about the Harry Potter books is that each installment is actually a mystery novel. J.K. Rowling's protagonist trio are always trying to figure out who is trying to kill Harry and what the Dark Lord is up to this year. Harry Potter bridges fantasy and mystery genres.

But many readers just don't seem to get it. My mother loves mysteries, but I can't seem to convince her to read Harry Potter. She doesn't think she'll enjoy the novels, because she can't wrap her head around the fact that they're mysteries. Of course, I don't think a lot of Harry Potter fans think to read mystery novels when they're looking for new reading material, either.

So this list is my appeal to both sides. The seven mystery novels listed here have each been paired up with a Harry Potter book containing similar elements. If you're a Harry Potter fan, just find your favorite installment here and read the corresponding book suggestion, easy-peasy. As for the mystery fans out there: if you haven't read Harry Potter, but you see several of your favorites listed here, consider this a sign for you to dive into the wizarding world.

Then Read The Maltese Falcon by Dashiell Hammett

When his partner and the man they were last hired to tail are both found murdered, Sam Spade is branded a suspect. Continuing with his private eye practice, Spade soon finds himself entangled in an international crime that centers on a single object: the titular Maltese falcon.

If you love Harry Potter and the Sorcerer's Stone, you'll love this book, with its framed main character and its focus on a single, tangible object.

Then Read Rebecca by Daphne DuMaurier

As the culmination of a whirlwind romance, widower Maximillian de Winter brings home his new bride to live at his estate, Manderley. The new Mrs. de Winter soon begins to feel she is not welcome in her husband's house, however, as it seems to be haunted by the ghost of Rebecca, Maximillian's first wife. As tensions mount, and the truth about Rebecca's death comes to light, Daphne du Maurier's novel takes a series of twists and turns that will leave you reeling.

If Harry Potter and the Chamber of Secrets is your favorite, you're bound to enjoy this book, which features grisly scenes and lingering spirits.

Then Read The Thirty-Nine Steps by John Buchan

Set at the beginning of World War I, The Thirty-Nine Steps follows Richard Hannay, an innocent man forced to go on the lam after an informant spy is murdered in his apartment. The prey soon becomes predator, however, as Hannay becomes embroiled in a new plan to protect military secrets.

Harry Potter and the Prisoner of Azkaban was all about Sirius Black: Harry's wrongfully-imprisoned godfather who escaped a life sentence and hunted down the real murderer, even as he was running from his own pursuers. Sounds a lot like John Buchan's novel, amirite?

Then Read The Talented Mr. Ripley by Patricia Highsmith

Rather than lose a wealthy friend, protagonist Tom Ripley murders Dickie Greenleaf and assumes his identity. Explaining Dickie's disappearance to the dead man's friends and family might be more than Ripley can handle, however.

You loved Harry Potter and the Goblet of Fire for the mystery of how Harry wound up competing with older students for the Triwizard Cup. The novel was full of mistaken identities and mistrust, just like Patricia Highsmith's mystery thriller.

Then Read The Yiddish Policemen's Union by Michael Chabon

This speculative novel is set in a world where the town of Sitka, AK became the center of European Jewish life after the collapse of Israel in 1948. A homicide detective whose life is a-shambles is tasked with solving a grisly murder and unwinding a twisted political plot after the brass attempt to stymie his investigation.

Harry Potter and the Order of the Phoenix was just one big dystopian thriller, and that's pretty much what you'll find in Michael Chabon's novel.

Then Read When We Were Orphans by Kazuo Ishiguro

Kazuo Ishiguro's When We Were Orphans centers on Christopher Banks: an English detective compelled to investigate the decades-old disappearances of his parents. Christopher's inquiry leads him back to his parents' Shanghai home, and forces him to dig deep into the dark secrets of his childhood.

You loved Harry Potter and the Half-Blood Prince because of the mystery behind the eponymous Prince's identity. Ishiguro's When We Were Orphans will give you the same thrill.

Then Read Blanche on the Lam by Barbara Neely

Running from a conviction of check fraud, housekeeper Blanche hits the road with a new employer. Little does she know, however, that she's just stepped out of the frying pan and into the fire, as one member of the Carter family is a calculating killer.

Harry Potter and the Deathly Hallows was all about Harry and crew putting together the final pieces of the biggest wizarding mystery yet, while staying one step ahead of Voldemort's grasp. The titular protagonist of Barbara Neely's Blanche on the Lam finds herself in similar circumstances, and you're sure to enjoy every minute of her journey.

More like this
Rupert Grint Just Shared A *Major* Update About Ron Weasley’s Future
By El Hunt
'Mayfair Witches' Already Changed 2 Major Characters From The Books
By Grace Wehniainen
Harry Styles Has Become An Accidental Vinted Model
By El Hunt
Here’s Why Tyler Perry Helped Prince Harry & Meghan Markle When They Moved
By Marina Watts
Get Even More From Bustle — Sign Up For The Newsletter
From hair trends to relationship advice, our daily newsletter has everything you need to sound like a person who’s on TikTok, even if you aren’t.