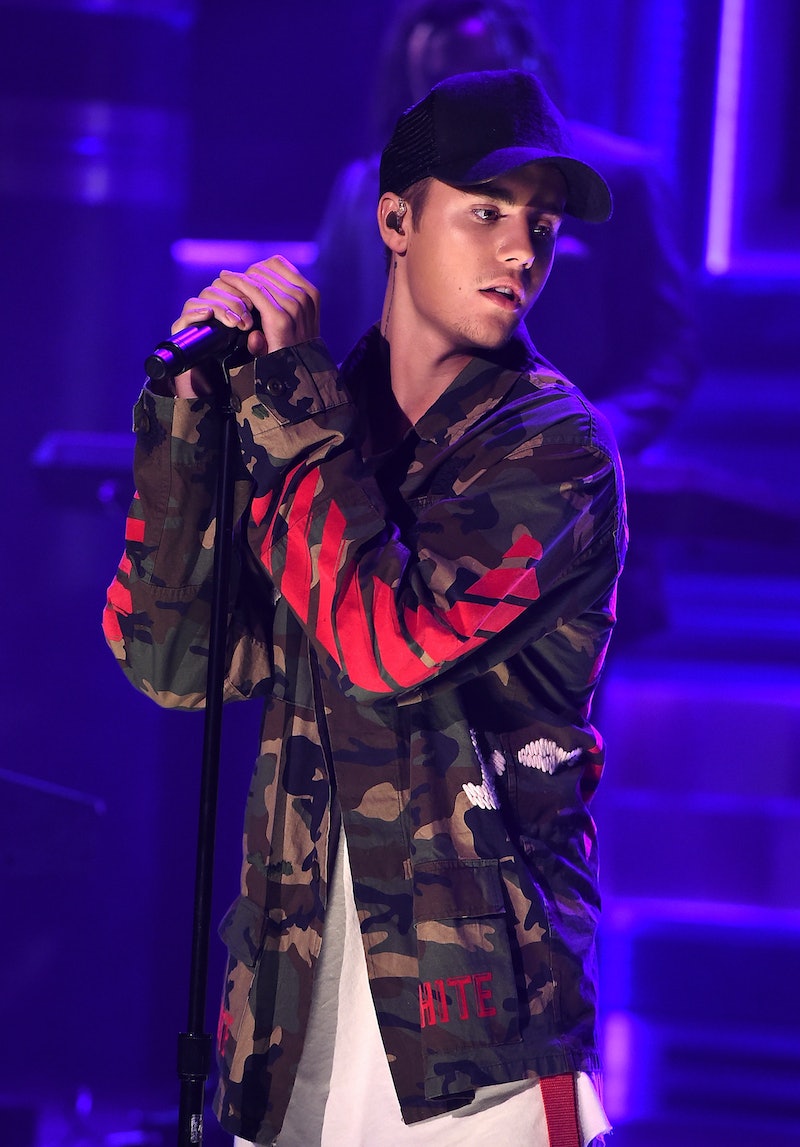 Look alive, Beliebers: Exciting details about Justin Bieber's new album, Purpose , have just been revealed. You may be thinking, "What could possibly be more exciting than the confirmation of a "What Do You Mean?" remix featuring Ariana Grande??" And I understand where you're coming from, but belieb me, these details are big. As I'm sure you know, Purpose went up for pre-order on iTunes on Friday, and although the track list wasn't unveiled, as Rap-Up reports, the songwriting and production credits for each song were. In other words, we now know who helped Bieber create his highly anticipated fourth LP!

There are a bunch of cool details to discuss, but first, we need to get some bad news out of the way: If the composer credits uploaded to iTunes are 100-percent accurate (and they may not be), there isn't a Drake feature on Purpose . No, it doesn't look as though fans will be getting a sequel to Believe 's "Right There" when Purpose drops on Nov. 13. Tragic, I know. But enough of that — it's time to move on to the good news! Here's the exciting stuff we learned about the Biebs new album thanks to the songwriting and production credits:

Belieb it or not, Bieber seems to have enlisted the help of recent Selena Gomez collaborator Julia Michaels on not one, but two songs on Purpose. If you ask me, Michaels was critical to the success of Gomez's new album, Revival (she co-wrote eight tracks), so this is great news. And, when you think about it, it's actually not all that surprising: Michaels is one of the hottest songwriters in the industry right now — everybody wants to work with her! I can't wait to hear what she and Bieber came up with.

He May Have Recorded A Duet With Ed Sheeran

According to iTunes, the fifth song on Purpose's track list was co-written by Ed Sheeran and pop super-producer Benny Blanco. (Blanco is responsible for co-writing and co-producing Sheeran's rumored Ellie Goulding diss track, "Don't.") So, does this mean Bieber recorded a duet with Sheeran? It's possible, but I think it's much more likely that he recorded a song that he and Sheeran wrote together. Either way, I'm looking forward to it. That lovable lil' redhead sure has a way with words.

He Worked With A Few Different Rappers

Drake may not be featured on Purpose, but that doesn't mean Bieber's sworn off rappers altogether: iTunes credits suggest that the 21-year-old singer hit the studio with Big Sean, Nas, and Travi$ Scott. Will Bieber spit a few bars on Purpose, as well? We'll just have to wait and see.

He Joined Forces With A Frequent Kanye West Collaborator

Remember when Bieber said he was working with Kanye West on Purpose? Unfortunately, it doesn't appear as though the material they recorded together made the cut, but the album's eighth track was allegedly co-created by frequent West collaborator Mike Dean. Dean has worked on some of the iconic rapper's biggest (and most "mainstream") songs, like "Power," "Monster," and "Runaway." Oh, and he also had a hand in creating Beyoncé and Jay-Z's massive 2013 hit, "Drunk In Love." I don't know about you, but I'm pretty pumped about this.

Those are all of the big details we know so far! Stay tuned for more info.