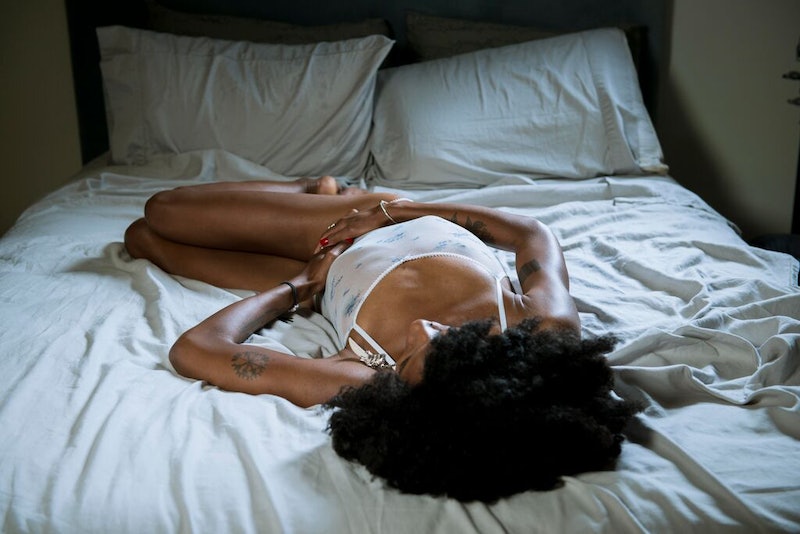 We at Bustle love giving you tips for how to tap into your sexual potential and troubleshoot when things aren’t going your way in the bedroom. But what about finding solutions to those stressful sexual health situations that inevitably crop up when you’re getting down? Emma Kaywin, a Brooklyn-based sexual health writer and activist, is here to calm your nerves and answer your questions. No gender, sexual orientation, or question is off limits, and all questions remain anonymous. This week’s topic: trichomoniasis, the STD you didn’t know about.

Q: The other day, my friend was telling me about an STD I'd never even heard of — trichomoniasis. Ah! I have lots of questions about trichomoniasis. Is it only transmitted sexually? Why is it never mentioned with the usual STDs? What are the consequences for vaginal health?

A: Trichomoniasis is definitely on the list of lesser-known sexually transmitted diseases (STDs). In fact, there’s a good chance you’ve never even heard of it — even if you are all caught up on your STD testing routine. So let’s all take a moment together to learn about it now, because the more you know, the more you can protect yourself.

Trichomoniasis is a very tiny parasite. While you may not have heard of it before, it has definitely heard of you. By which I mean to say, it’s extremely common — the most common curable STD in the world, in fact, with around 174 million people infected annually. An estimated 3.7 million of those people are living in the United States.

Unfortunately for humans who have vaginas, you’re more likely to get this parasite. Scientists don’t know why this is, but some think that prostatic fluid, which is the secretions prostates make that are one component of semen, contain materials that harm the parasite.

How Do You Get It?

However, it’s not just sex that exposes you to this disease. The parasites can live outside the body for up to 45 minutes, which means there are other ways to get it — including sharing swimsuits or towels, and swimming in public pools. Ack!

The reality is, you may have trichomoniasis right now ... and not even know it. That’s right, around 70 percent of people who are infected don’t have symptoms. If you do experience symptoms, and you have a female reproductive system, they can include: an itchy vagina, vaginal discharge that is smelly, frothy, foamy, and either yellow or gray-green in color, and painful urination. If you have a male reproductive system, you probably won’t get any symptoms, but if you do they will be urethral discharge, painful aka burning urination, irritation inside your penis, and pain or swelling in your balls.

For all humans, if symptoms are going to develop, they’ll mostly do so within five to 28 days after infection, because that’s the incubation period of the parasite, but they can also show up later. Basically, if you notice bad-smelling discharge or are experiencing pain when you pee or have sex, tell your doctor because you might have trichomoniasis.

How Do I Know If I Have It?

It can be hard to know if you have trichomoniasis — you might feel no symptoms, in which case it’s impossible for you to diagnose yourself, and even if you do have the symptoms, they could be a number of other genital unpleasantries. So how do you know? Unfortunately, you have to go into your doctor’s office to get your fluids tested under a microscope to know for sure. She’ll tell you if you test positive for this pesky parasite.

Why Have I Never Been Tested For It?

Even if you’re getting tested routinely for STDs, you still may never have been tested for trichomoniasis. That’s because routine testing is usually limited to chlamydia, gonorrhea, HIV, syphilis, and hepatitis, with genital herpes only tested for if you come in with symptoms (because there isn’t a good screening test) and human papillomavirus (HPV) tested for during your routine pap smear (there’s no screening test for men).

So why isn’t trichomoniasis on the list? It has to do with screening guidelines, which don’t mandate it like they do with other STDs. Basically, researchers have found that it doesn’t make sense to screen non-pregnant people for trichomoniasis — either you’ll come in to get treatment if you have symptoms, or you’ll just live with it with no side effects. You could get screened if you have HIV, or if you live (or love) in a place where lots of people have it. So that’s why you probably haven’t ever gotten a STD test result that includes this parasite.

What Are The Risks To Having It?

Part of the reason you don’t get routinely tested for this STD is that having it really doesn’t cramp your style. Seriously, if you’re not experiencing symptoms, there isn’t really any negative health impact. There is a small risk of it traveling through other parts of your body — specifically the tissues that make up your urinary tract and reproductive organs. But mostly the risks come if you have it and are pregnant, because it can cause pre-term births and babies with low birth weight and can also transmit the parasite to the baby, which is dangerous.

Finally, if you have trichomoniasis, your genital region can get inflamed, which researchers have found makes it a bit easier for you to become infected with HIV, as well as to pass it along to other partners.

How Is It Treated?

Your doctor tells you you have trichomoniasis, now what? She’ll prescribe you an antibiotic, generally a single megadose (yes that’s actually what it’s called) of metronidazole or tinidazole. You’ll need to not have sex for a week, until you’re all cleared up.

There are some home remedies you can do to increase the power of the antibiotics. You can douche with either a vinegar lemon douche (one teaspoon vinegar, one quart warm water, and the juice of one lemon) or a yogurt lemon douche (half a teaspoon of live-culture yogurt, one cup of water, and the juice of one lemon). You can also add oil of bergamot to a natural douche or your bath water. Please note that these haven’t been proven to cure trichomoniasis without the antibiotic. And please please please don’t douche with anything that has fragrance in it (so basically anything you can buy over the counter). They just kill the bacteria that keep your vagina in natural balance.

All of your sexual partners will also need to get treated, even if he/she/they haven’t tested positive for it. This is to prevent you from just passing it back and forth between you.

How Do I Protect Myself From Getting It In The First Place?

If you’re sexually active, there’s no way to protect yourself 100 percent. However, you can reduce your risk by using condoms when you have sex. And since these parasites can live outside the body for so long, you should also not share towels or swimsuits with other people, and shower after you are done swimming in a public swimming pool. It also helps to wash your body before and after you have sex.

Of course, these are all just suggestions. This isn’t to freak you out and have you running to the shower the moment you’re recovered from your orgasm afterglow, or stop you from enjoying the pool!

The reality is, sometimes you get an STD. This is particularly true with one as easy to catch as trichomoniasis — I mean it’s not even limited to bodily fluids for f**k’s sake! How’s a human to protect themselves against the world when there are things like this parasite racing to live inside you? The bad news is that you can’t really, not completely. The good news is that trichomoniasis is curable, and has no negative side effects for most people. So if you test positive for it, pop your pill, grab one for each of your lovers, and move on with your life.