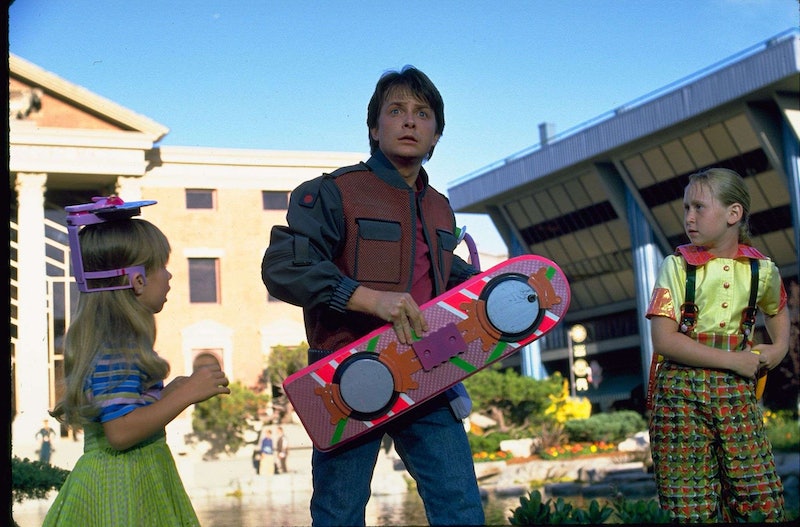 I think we can all agree on one thing: No matter how much we all love seeing 1985's Marty McFly flailing about 30 years in the future, Back To The Future Part II's version of 2015 feels a bit... different to our current reality in the real 2015. Everything in that movie has a strong '80s sheen to it that makes it seem, upon first glance, like that decade's idea of the future was way off. With some of the pivotal technologies that we have come to rely on today (cell phones, the Internet, etc.) glaringly absent, the film's predictions for our future seem pretty foreign. (I mean, how realistic can the 1985 version of 2015 be when they are still talking about sending faxes. Way off, 1985. Way off.)

But, if you take a closer look at the film, it becomes clear that some of the gadgets and details in Back To The Future Part II actually have modern-day equivalents. Sure, nothing is exactly as the film predicted — sadly, cars still move across the ground instead of the sky, and hoverboards as the film imagined are still not a thing even though it's 2015 and OH MY GOD HOW HAS NO ONE INVENTED ONE YET?! — but there are some things in the actual 2015 that seem pretty darn similar to what Back To The Future Part II imagined it to look like back in 1985. I mean, video calls, anyone?

Take this as proof: Back to the Future Part II 's future predictions aren't as off as you may have thought.

At the end of Back To The Future— and in the beginning of Back To The Future Part II— Doc uses banana peels and beer to fuel the DeLorean from the future, a scene probably seemed ridiculous to the 1985 and 1989 audiences. In 2015, however, it's a little less ridiculous. Although it's not common place yet, it is possible to fuel your vehicle with vegetable oil. So, technically manning a car on homegrown foods is totally possible.

It makes him hardly recognizable, according to him, but I can't tell the difference. Kind of like that chemical peel my great aunt got recently that I wouldn't have known even happened had she not told us all about it over Sunday dinner.

OK, this so flying cars like in the film definitely a far cry from reality — but there are self-parking cars in the real 2015, and that seems like a decent first step.

Please tell me I'm not only the one who saw these accordion-like sleeves in BTTF Part II's 2015 and pictured those tiny Magic Bubble shirts that stretch to fit anyone of any size.

6. Kids Wearing Their Pants Inside Out

Doc says that all the kids are wearing their pants inside out these days. It may have sounded like an absurd concept at the time, but remember when Kanye West hosted an entire runway show with people wearing stockings over their shirts and almost everything inside out? Not so absurd anymore, is it?

7. All Lawyers Are Abolished

That's why Marty's son is sentenced in under two hours. Sounds terrifying to me — and thankfully, lawyers are not abolished in 2015 — but it also kinda sounds like an episode of Judge Judy .

This totally reminded me of that time they made that Tupac hologram that simultaneously freaked everyone out and was the coolest thing ever.

The modern day equivalent are actual video billboards. How those are safe to put along the road is beside me.

I'm imaging that this got the biggest reaction in the theater back in 1985. "Cars are HOW MUCH in 2015?" a few people probably tittered from the back row. If only spending $40,000 on a car were still a joke we were all in on and not the absolute truth.

11. Multiple TVs At The Diner

This is pretty normal in real 2015. Have you been to a Buffalo Wild Wings in your life?

I'm assuming we're still years away from hovering vehicles of any kind, but there are those cool things that the Kardashians like to play with:

I have that on my phone! It might not open the door to my house just yet, but, it's definitely just as important.

It takes a little bit longer than the mere seconds that the McFlys are able to hydrate an entire pizza, but there is an invention on the horizon that is claiming to be the Keurig of food preparation.

This makes me want to break out the fireplace app on my iPad. The weather these days definitely calls for it.

Marty's son struggles with finding the right channel as he commands the TV to switch to another show, kind of like how I struggle with my voice-activated remote control from Xfinity. It's super cool, but I think it might be bored with me constantly telling it to turn to Bravo.

This, unfortunately, has a ton of modern equivalents. Like the fact that your company emails are all being monitored (hate to break it to you). Or — the even bigger offender — the Patriot Act. Basically, we are all seconds away from being fired at any time, just like Marty was when his call was intercepted by his boss. Watch what you say over e-mail, kids.

When you dig a little deeper, the things that Back to the Future Part II kinda got right is actually pretty impressive. But, seriously, if someone could work on getting those flying cars on the market ASAP, I'd really appreciate it.

More like this
At 28, Lesley Manville Was Acting, Picketing, & Singing Kate Bush Songs
By Olivia-Anne Cleary
Reese Witherspoon Gave Fans Hope For 'Legally Blonde 3' After This Surprising Movie Inspired Her
By Jake Viswanath
22 Movies On Netflix That Are Perfect For The Whole Family
By Bustle Editors
Jennifer Coolidge Needs 'Legally Blonde 3' To Happen So She Stops Getting Hot Dog Jokes
By Jake Viswanath
Get Even More From Bustle — Sign Up For The Newsletter