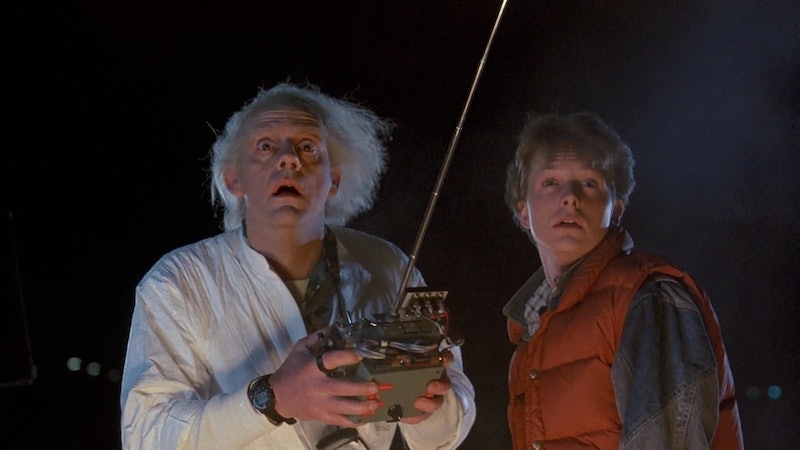 If my calculations are right... Back to the Future just turned 30. The 1985 comedy is about a teenager who travels back in time to ensure his parents fall in love in order to save his own life. It's hard to imagine my childhood without Back to the Future, as so many Friday nights and rainy summer days were spent watching Marty McFly and Dr. Emmett Brown zipping through time with a DeLorean and a very trusty dog. However, the film almost never came to be. It faced innumerable setbacks, but Steven Spielberg along with Robert Zemeckis and Bob Gale were determined to pull it off. And they did, with flying colors.

Not only did Back to the Future give us unforgettable catchphrases like "Make like a tree and scram," and turn a puffy red vest into the must-have accessory for every cool dude in sight, it was a game-changing film for Hollywood. It also made Chrisopher Lloyd and Michael J. Fox into Hollywood's unlikeliest duo. Back to the Future was a genre of its own and paved the way for cool nerd culture. Marty McFly was a total babe who rode a skateboard, but he also had a brilliant mind and hung out with a mad scientist on his free time. Back to the Future taught Hollywood that charm, brains, and humor are not mutually exclusive.

In honor of the film's 30th anniversary, here are some facts you probably don't know about the movie and its incredible history. Now get ready...you're gonna see some serious sh*t.

1. The Movie Was Rejected More than 40 Times By Studios

Bob Gale, the film's producer and co-writer spoke to CNN in 2010 and explained why the now classic had such a hard time getting made, "It was always one of two things. It was 'Well, this is time travel, and those movies don't make any money.' We got that a lot. We also got, 'There's a lot of sweetness to this. It's too nice, we want something raunchier like Porky's. Why don't you take it to Disney?'"

2. It Finally Got Made Because Romancing The Stone Was Such A Hit

Robert Zemeckis directed the 1984 saga and when it became a major hit, studios everywhere wanted to produce his next film. Thankfully for us, Zemeckis was determined to make Back to the Future, and finally the studios came calling. Back to the Future nearly tripled the box office intake of Romancing the Stone.

3. Ronald Reagan Quoted The Movie During A Major Presidential Duty

4. The Film Was A Huge Change Of Pace For Steven Spielberg

It was the first movie not directed by Spielberg under his own company Amblin Entertanment.

5. It Was Almost Called Spaceman From Pluto

Universal exec Sid Sheinberg was convinced that having "Future" in the title of the film would hinder its success. The alternate title he suggested to Spieilberg was Spaceman From Pluto. Spielberg's response was priceless, he wrote to Sheinberg, "Dear Sid, thanks so much for your most humorous memo. We all really got a big laugh out of it.”

6. There Was A Version Of The Movie Where Michael J. Fox Wasn't Marty McFly

Fox's shooting schedule with Family Ties got in the way of Back to the Future's release date. The choices after Fox were either C. Thomas Howell or Eric Stoltz. Sheinberg insisted on Stoltz and Zemeckis shot about 45 minutes of the film with him in it. He and Spielberg brought that to the studio to show just how badly they needed Fox for the role. Thankfully a deal was struck with Family Ties and Fox was able to shoot both simultaneously.

7. Back to the Future Allegedly Broke A Curse

Spielberg shared in the same interview with Empire, "I didn’t like the time-machine in the first draft, which was a bit like a car wash. It was actually a rather large object, a chamber...When Bob and Bob came up with the DeLorean, a four-wheeled time machine, everything began making more sense. It could now take them anywhere."

9. The Inventor Of The DeLorean Wrote Fan Mail To The Filmmakers

John DeLorean wrote to Bob Gale and Robert Zemeckis, "Thank you for keeping my dream alive."

10. Huey Lewis Shuts Down His Own Song In The Movie

That's him saying, "I'm afraid you're just too darn loud," to Marty McFly and his band The Pinheads about his very own song, "Power of Love."

11. Robert Zemeckis Came Up With The Idea For The Movie By Going Through His Dad's Yearbook

The director and co-writer shared with The Guardian in 2014, "What turned the light on for me was coming across my dad's old high school yearbook and thinking, 'Would we have been friends if we'd been at school together?' All of us have that revelation when we understand that our parents were young once, too. That's a big moment. Then there is the message that we all have control over our destinies. I thought we could dramatise those two things.

Zemeckis recalled his difficulty working with the actor, "Crispin Glover, who played George, was really something. 'Nuts' is a good description. A lot of those mannerisms were actually his. He had to be reined in occasionally. The hardest thing was getting him to act like a completely normal person for the final scenes of the movie." Ouch. Dean Cuddey, the Director of Photography gave some credence to Glover by noting, "In fact, it made George more of a stand-out character."

13. The Film Actually Changed The Way Movies Were Made

Back to the Future had a hard deadline to make in order to meet its summer release. Due to the lateness of Michael J. Fox's involvement, the post-production crew had to scramble to get it ready. Zemeckis wrote in the same Guardian piece, "Nine and a half weeks after we'd wrapped, it was in cinemas. We ruined post-production schedules for ever: everyone would be told, 'Those Back to the Future guys did it fast; why can't you?'"

Despite all of its production woes and casting conundrums, Back to the Future was made and it went on to become a huge success. Marty McFly remains one of the most memorable characters in cinematic history and the DeLorean will forever be a time machine, rather than a failed car design. We can also thank Back to the Future for proving to studio exectuives that things like time travel and comedic science-fiction have huge audiences. Back to the Future was a labor of love, and thankfully one that was never lost.