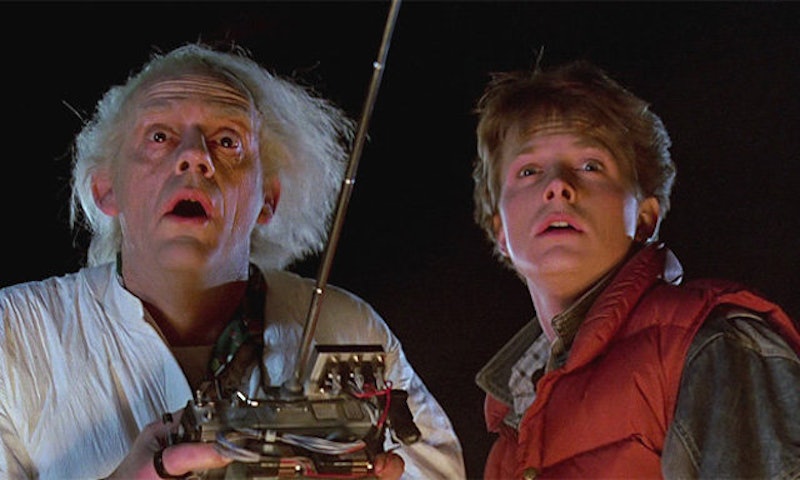 Unless you've been living under a rock, or your Internet has been particularly shoddy lately, you're likely already aware that October 21, 2015 is the most important day in all of time travel film history. But, just in case you don't — it was on October 21, 2015 that Marty McFly (along with Doc Brown and Jennifer Parker) criss-crossed the dimensions of time with a flying DeLorean in Back To The Future Part II, and landed in 30 years in the future. To properly celebrate the McFly-tober (because yes, it is a date worth celebrating), I have began re-watching the greatest trilogy about time travel — and, in doing so, I have learned that there is a crazy number of subtle moments in the Back To The Future trilogy that are super easy to miss.

I have seen the Back To The Future trilogy at least a 100 times. It is the classic go-to set of films when my family has Friday movie nights, and also, Michael J. Fox was one of my first celebrity crushes. So, it's pretty shocking to me that I am still noticing details in the films that I missed during the previous viewings — but it's also not surprising, because the ability to bury funny jokes and details so deep they takes 30 years to notice is just one of talented director Robert Zemeckis' many strengths.

For instance: I had never previously noticed how omnipresent the Hill Valley clock tower truly is (it's everywhere), or that the future Mr. Frodo Baggins of Lord Of The Rings made an appearance in the second film. Additionally, Back To The Future left a trail of easter eggs throughout the films that can take years to notice.

So, settle in, because where we're going, we don't need roads — but you will need a quick thumb to pause on these hidden Back To The Future gems.

1. Something Is A Little Off

During the opening sequence of the first BTTF film, all of Doc's clocks read 7:53 (and, as Doc tells Marty on the phone, are 25 minutes slow) except the clock shown next to the case of plutonium. It's basically like a neon sign that reads, "This package is bad news. Stay away." Clearly, none of the characters listened.

In the the original Back To The Future film, for just a split-second, a yellow bumper sticker is visible on the rear of Doc's truck. It reads: "One Nuclear Bomb Can Ruin Your Whole Day." Since the entire plot of the film stems from stolen plutonium that results in Doc's death, a nuclear bomb really did ruin his day! Who knew bumper stickers could be so prophetic?

Although Marty and Jennifer initally credit Doc as the originator of the phrase, "if you put your mind to it, you can accomplish anything," Doc never actually says this line in any of the films. Surprisingly, though, George McFly does use the phrase.

When Marty performs at the "Enchantment Under the Sea" dance, he begins to mimic famous rock stars: He kicks the speakers as a homage to The Who, he plays his guitar lying down like Angus Young of AC/DC, and he even hops across stage like Chuck Berry.

5. The Numbers One And 21 Are Very Important

When Einstein the dog was sent into the future, he was sent one minute ahead — but his stop watch reveals that one minute and twenty one seconds has elapsed. Also, Einstein reappeared at 1:21 a.m., and the flux capacitor requires 1.21 gigawatts of electricity. Someone really likes the numbers one and 21... just sayin'.

Christopher Lloyd, who plays Doc, is 6'1 — while Michael J. Fox who plays Marty McFly is 5'4.5". Apparently, this caused some issues with camera blocking. To combat this problem, Lloyd would hunch for close-ups, so he and Fox could appear in the same frame. Doc Brown constantly "hunching" to talk to Marty continued in the subsequent films.

7. That's Where The Money Came From

In 1955, Doc Brown lives in an opulent mansion. In 1985, his home is his mansion's former garage, and its surrounded by a commercial development. Doc does say it took all of his family's fortune to create the time machine, so it's safe to assume the insurance money from the mansion and the proceeds of selling the surrounding land paid for the time machine. That's a whole lotta cash for transportation that keeps running out of fuel.

Billy Zane, aka Cal Hockley from Titanic, made his big screen debut as one of Biff's cronies. Billy Zane of 1955 is hot. I can kinda see why Rose would accept his proposal.

Ever watch Back To The Future and found yourself thinking the town square looked really familiar? You're not alone — the same lot was used to film an episode of The Twilight Zone and the film Gremlins.

When Marty begins setting up his music at Doc's house, the first dial he turns is labeled CRM 114 — which is a reoccurring motif used in many of Stanley Kubrick's films.

Marty arrives in 1955 at the Peabody farm, where old man Peabody lives with his son, Sherman. In Rocky and Bullwinkle back in the '50s and '60s, there was a segment featuring a time-traveling dog called, "Mr. Peabody and Sherman." Coincidence? I think not.

As Slashfilm points out: Before Michael J. Fox took on the role of Marty McFly, production began with Eric Stoltz in the starring role. After a few weeks of shooting, though, Stoltz was replaced by Fox — so all of Stoltz's scenes were reshot. That is, except for Biff's sucker-punch scene. See the above GIF? That's Stoltz's hand and head in the left corner of the screen.

Usually, foreshadowing in films are much more subtle — but that's not the case for BTTF. A clock in the opening sequence shows a man hanging from a clock, similar to how Doc looks during the film's climax.

In the beginning of the film, Marty meets Doc at "Twin Pines Mall" — and while they're there, Doc Brown reveals that the land used to be owned by old man Peabody, who had "this crazy idea... about breeding pine trees." When Marty travels to 1955, though, he runs over a pine tree on the property — and when he returns to the 1985, the mall is inexplicably named "Lone Pine Mall."

When Doc is about to leave for the future in BTTF, he tells Marty, "I'll get to see who wins the next 25 World Series." It's not apparent at the time, but with that line, Doc basicaly just explained the entire plot of the second film. In Back To The Future Part II, Biff steals a sports almanac and gets it to his past self to rig sport bets and make himself a millionaire.

Your eyes do not deceive you: Yes, Elijah Wood does plays one of the boys in the diner in Back To The Future Part II.

In Back To The Future Part II, it is revealed that a student spiked the punch at the school dance. In the original Back To The Future, George confronts Biff in the parking lot after drinking the punch. Kind of makes you see George's shocking courage in a whole new light.

18. That Makes A Lot More Sense

When Old Biff gets his cane stuck in the DeLorean and he begins to thrash in pain, I was like, "wwwhhhaat?" But, after watching Back To The Future Part II in sequence with the other films, it became clear to me that Biff could be suffering from the same aches and pains that Marty experienced when he started to disappear in the first film. This means when Old Biff brings the sports almanac to his younger self, he drastically changes his future — and therefore no longer exists in 2015.

The Back To The Future Part II alternate 1985 timeline has President Richard Nixon being elected to a fifth term. This exact same thing happens in the graphic novel The Watchman, written by Alan Moore and Dave Gibbons. Is this a chicken and the egg situation?

Throughout the first film, Doc Brown's character was chock full of foreshadowing — and he's no different in the second installment. In Back To The Future Part II, Doc is seen wearing a shirt with cowboys on horseback and train... key plot points of the third film.

The Hill Valley Clock Tower can be seen being unloaded from the train behind Marty and Doc as they talk with the conductor about the train's speed. The face of the clock can also been seen when Mad Dog accuses Marty of being a coward. That clock is everywhere!

In Back To The Future Part II, Biff's hotel is called, "Biff's Pleasure Palace." In the third film, the saloon is called, "Palace Saloon." I'm hoping this was done on purpose.

24. It Begins Where It Ends

Huey Lewis And The News' song, "Power of Love," is played during the second scene of the original film, and in the second to last scene of the third film. Talk about bookending!

Great scott! Clearly, there's a lot in the Back To The Future trilogy I never noticed before. Who else is totally craving another re-watch, now?