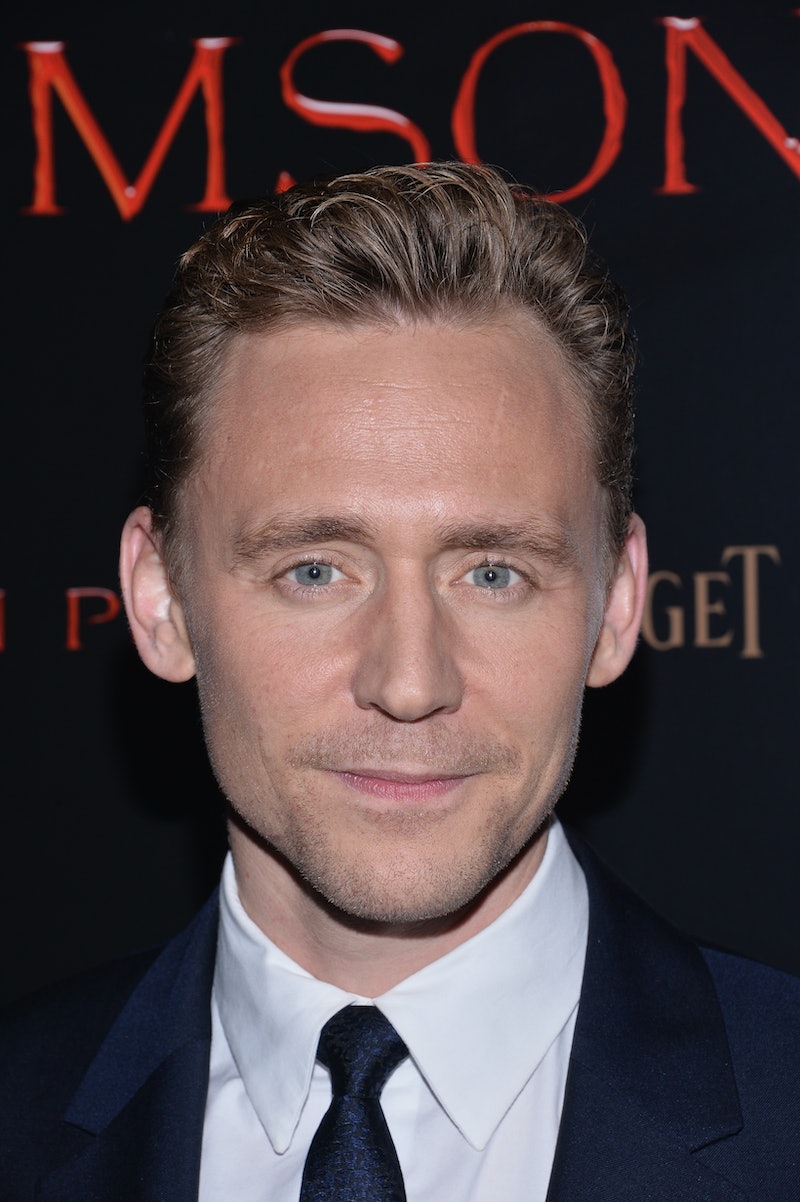 The only thing better than a new Tom Hiddleston movie is a Tom Hiddleston press tour. Don't get me wrong: I love when Hiddleston dominates the comic book world with his portrayal of Loki, or kicks ass as a World War I solider in War Horse (dude totally rocks that officer's uniform). I live for it. But my favorite thing (as I'm sure Hiddlestoners all over the world would agree) is when Hiddleston gets to be his quirky, charming, and most authentic self in interviews. His interviews are always super quotable and hyper divine — he is a media rock star, and his latest press tour has been no different.

Case-in-point: Hiddleston is currently promoting his newest flick Crimson Peak. The film is a gothic romance that also stars Jessica Chastain and Mia Wasikowska. It is directed by the king of avant-garde horror, Guillermo del Toro and its trailer is frightening. Like, I'm talking buckets of blood and heart-stopping suspense. After all, The story follows a newly wed as begin living at her new husband's possibly haunted estate (with a creepy sister-in-law included).

That said — even though the film is all about darkness and fright, the press tour has been nothing short of hilarious, adorable, and enthralling. Some highlights include:

When He Talked About His Big Hands

You know what they say: big hands on a man means a big heart. Awww, I'm poetic.

When He Posted Adorbs Behind-The-Scenes Photos

Mia Wasikowska best be keeping her hands of my man. (Hey, I'm just sayin' what we are all thinking. Or maybe it's just what I am thinking. Either way it doesn't matter, it had to be said.)

When He Impersonated Robert De Niro

Only a man with a lot of confidence and giant kahunas would execute a Robert De Niro impression right in front of De Niro's face on The Graham Norton Show. Tom Hiddleston is apparently one such man.

When He Got All Cute About Guillermo Del Toro Joining Twitter

A cast that tweets together, stay together and makes a million more movies for the fans to enjoy, together.

When He Gave Us All 90 Seconds Of Information Overload

This is exactly how I would be with Tom Hiddleston on our first date. I have a lot of questions, and it seems like Tommy-boy has all of the answers.

Deep down, we are all Hiddlestoners.

When He Wore Glasses In An Interview

You could turn the sound off and still enjoy this interview — that's just how beautiful Hiddleston is. Add glasses to the mix and wwwhhhaattt? That's crazy beautiful.

Sadly, he did not respond to my question about accepting a marriage proposal. Sigh, maybe next time.

When He Looked Dashing And Dapper At The 'Crimson Peak' Premiere

Honestly, I'd buy a movie ticket for the film solely based off this picture, and nothing else.

All I gotta say is thank goodness Tom Hiddleston is in our lives.