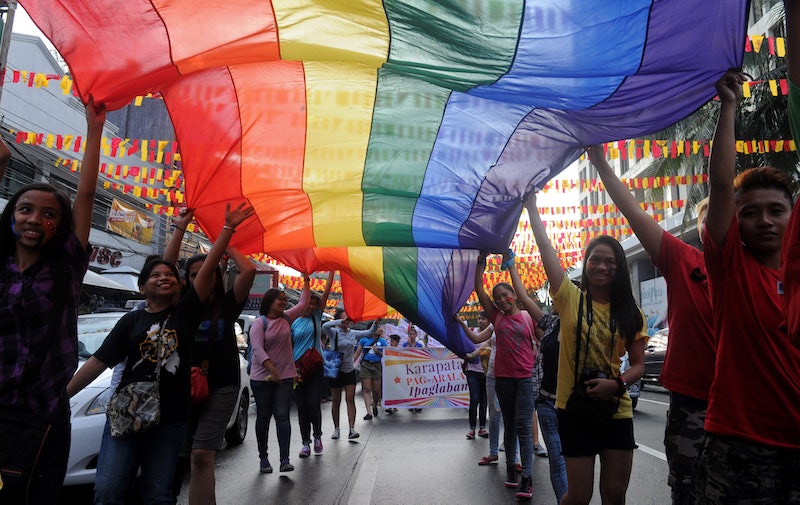 A person's Facebook page can tell you a lot about them — and it seems that all the Facebook pages in the US collectively can say a lot about America. For instance, a lot more Americans are coming out as LGBT on Facebook than ever before — and in honor of National Coming Out Day last week, Facebook decided to compile some of that data. And the results are pretty fascinating.

In coming up with their data, Facebook looked at anyone who indicated that they are interested in people of their same gender, interested people of multiple genders, dating someone of their same gender, or anyone who use Facebook's custom gender option. Which might not be the most accurate way to determine if someone has really come out — I know plenty of people who have jokingly indicated they are married to one of their friends on Facebook, including friends of the same sex, and I myself — a cis-gender person — have played around with the custom gender option on Facebook. Plus, lots of people — especially teenagers — aren't on Facebook, or don't use it much. Still, Facebook is as good a thing as any to use to determine how many Americans are coming out publicly.

So what are the results? Well, it turns out people are coming out more often than ever before.

Although Facebook hasn't revealed the absolute numbers of how many people come out on Facebook in America every day, they do say that about 6 million have come out in total. And based on their criteria, you can see from the above graph that more people are coming out every day than was true even a year ago. In fact, the rate of people beginning to openly identify as LGBT is more than double the rate last October.

Interestingly, an especially large number of people came out on or around the day of the Supreme Court decision legalizing same sex marriage nationwide. Which supports the idea that legal recognition and legal equality really does have a big impact on how comfortable people feel publicly declaring their own identity.

Also interesting is the state-by-state break down of what percentage of people have come out as LGBT on Facebook.

Apparently Nevada and New York are just full of openly LGBT Facebook users. People in, say, Mississippi on the other hand, aren't as likely to indicate themselves as such. In fact, the rate of out Facebook users in New York is roughly double the rate in Mississippi.

Perhaps most striking of all, however, is the fact that of the 6 million or so people that Facebook considers to be out as LGBT, 78 percent have come out (at least on Facebook) since the beginning of 2012. It all suggests that things are changing quickly for the LGBT community, and that people are rapidly becoming more comfortable openly identifying as such. Which is pretty awesome.

You can find more info on the rate of LGBT people coming out on Facebook, as well as the number of users who support LGBT groups on Facebook, here.