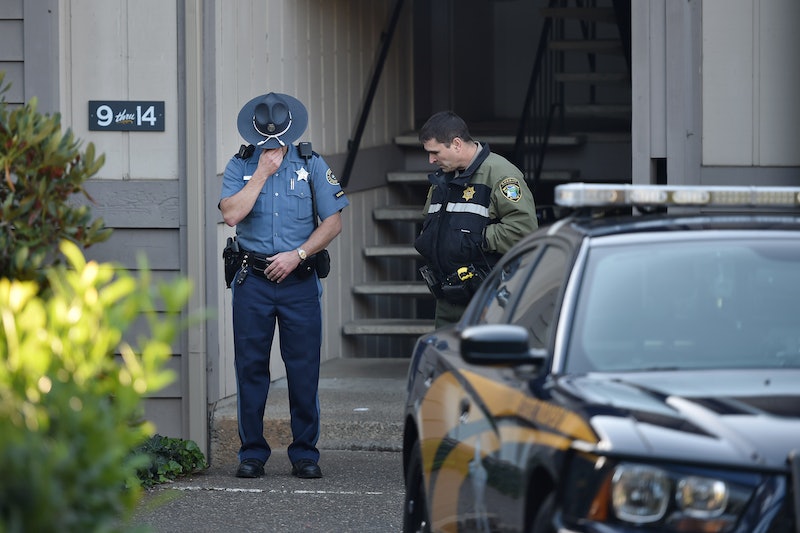 In a statement on Friday, a survivor of the deadly October 1 shooting at Umpqua Community College in Roseburg, Oregon remembered the scene as chaotic, but recalled that the shooter, 26-year-old Chris Harper-Mercer, had been largely emotionless throughout the ordeal. Army veteran Chris Mintz, who was shot five times while attempting to save the lives of UCC classmates, took to his personal Facebook page this week and wrote that the lone gunman acted "like he was playing a video game." Mercer fired into several rooms throughout the incident, killing eight students and one professor before turning the gun on himself after police arrived.

"I put my back up against the door [of one of the classrooms] and was just waiting," said Mintz, whose heroic actions on the day of the shooting later prompted a wave of support on social media. "[...] All of a sudden, the shooter opened the classroom door beside the door to my left, leaned half of his torso out, and started shooting as I turned toward him ... he was so nonchalant through it all, like he was playing a video game."

Mintz recalled that he had fallen sideways after being struck, and had been shot one more time before he called out, "It's my kid's birthday, man," at which point he said Mercer stopped shooting and retreated into a classroom. "I'm still confused at why he didn’t shoot me again," wrote Mintz.

Investigators on the scene initially reported finding a final note from the gunman, in which he described feeling as if the world had "turned" on him and that he would be "welcomed in hell." Witnesses who knew Mercer from when he lived with his mother in California described him as quiet and "withdrawn" in media interviews, with at least one neighbor recalling to reporters that Mercer often wore the same military-style clothing each day. In a report on October 2, The New York Times confirmed that Mercer had been fascinated with firearms as well — upon investigation, authorities discovered that Mercer had been in possession of 14 legal firearms — and that his mother, nurse Laurel Harper, had encouraged his obsession.

According to an October 6 report by Oregon Live, a former neighbor recalled in an interview that Mercer had also been an avid gamer, spending the majority of his days inside, watching movies and playing a video games, although she did not specify any titles.

Discussions over the direct correlation between gaming and real-life gun crimes have been largely dismissed in recent years, as a slew of major studies were unable to determine any real link between the two. And despite claims from legislators like Iowa Republican Sen. Chuck Grassley, who in 2013 insisted that video games, not guns, were to blame for increased mass shootings, there is still no clear evidence that this is true. For now, the link between Mercer's alleged video game-like behavior and any potential first-person shooter games he may have played is murky at best.

For his part, Mintz wrote on Friday that he was at least happy the community had come together to heal after the tragic event. "I am so happy with how the community has bonded and supported everyone during this healing," he wrote. "I am recovering well and thank everyone for their thoughts and prayers."