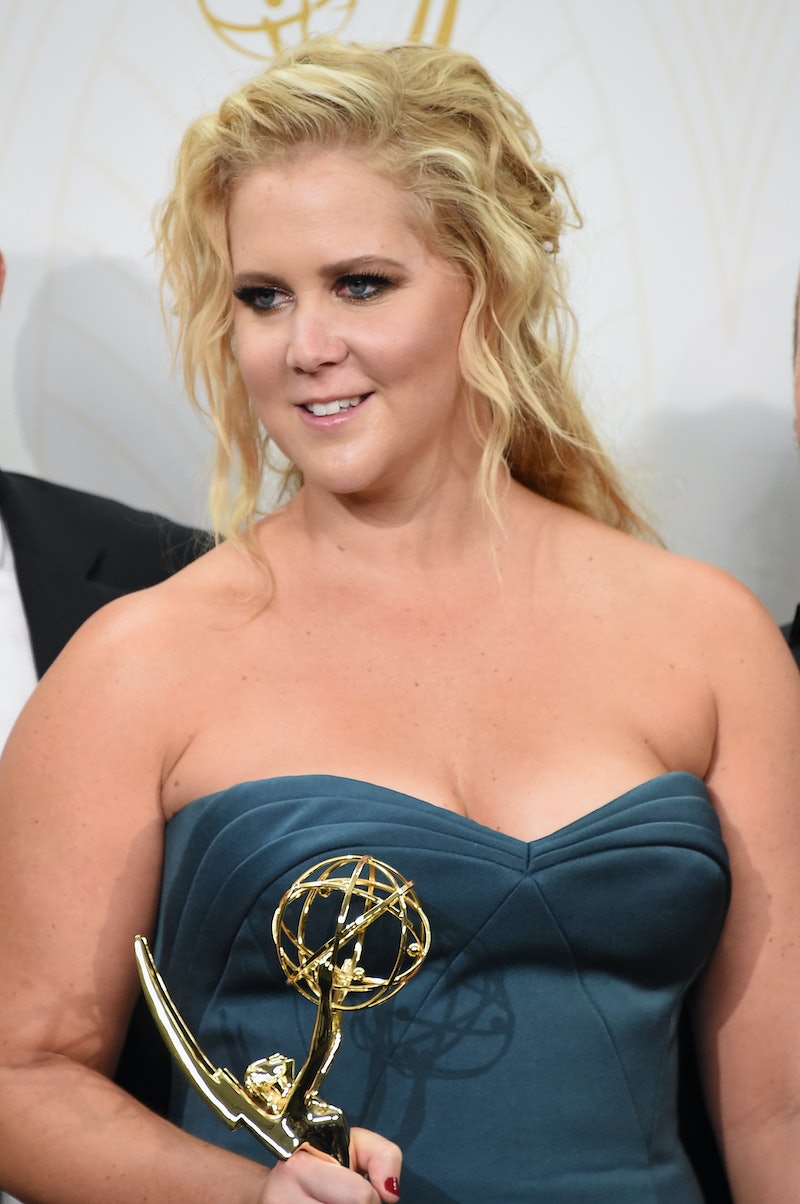 Earlier this week on the TODAY show, Amy Schumer got emotional about body image and made us all love her a little more — which I didn't think was even possible at this point. She provided women with an important reminder that we deserve to feel good about ourselves, and we shouldn't compromise our health in an effort to lose weight or look a certain way (imagine that!). So it wasn't surprising that her Oct. 17 HBO special Amy Schumer Live at the Apollo addressed body image with a message that was both hilarious and inspiring.

Wine bottle in hand, Schumer appeared confident and comfortable with herself as she took to the stage and immediately called out Hollywood's ridiculous standards for women's appearances. "Hollywood's secret is that they don't put food in their faces... And that's not an option for me," she explained. Nor should it be, because I'll just point out the obvious that Schumer looks great and starvation isn't an attractive appearance for anyone.

Schumer explained that, during her time in Los Angeles, she went to a nutritionist and she was just not on board with the proposed meal plan: "They told me, 'Here's your new diet. For breakfast you'll have a smoothie. And for lunch you'll journal about it.' And I was like, 'It's sounding like at times I will be hungry.'"

She proceeded to quip about a line most of us are super familiar with: "I've never said 'Oh my God, I forgot to have lunch today!' If anything, I'm like, 'Oh, sh*t. I had two lunches today.'" Women are consistently expected to pretend that we're just not hungry, that we're too busy to do unimportant things like eat a real meal, and that a salad is the most filling, satisfying food option in the world.

What I appreciate about Schumer's approach to this sort of humor is that she's poking fun at the standards — not the women who are struggling with disordered eating. It's so important to not be judgmental towards women, actresses or otherwise, who are grappling with eating problems. Eating disorders are no joke and, although the media is certainly not the sole cause, it is definitely part of the problem. We should all focus on moving towards a society that discourages women from engaging in unhealthy behaviors in an effort to fit the cookie cutter definition of "beautiful".

Then, Schumer did us another great service but informing the audience of an amazing app, Foodspotting. She explained that, "it's like Tinder, but for foods." My immediate reaction was, "sign me up!" and, based on social media reactions, I have plenty of company:

I hope that someday (preferably sooner rather than later), we won't have a dire need for body positive messages from celebrities or anyone else. But, until then, I applaud Schumer for providing her fans with the important reminder that our worth is not correlated to our body size — and we shouldn't feel guilty about eating a real meal and enjoying it. So, if you'll excuse me, I'm off to download Foodspotting and find my culinary soulmate.

More like this
Amy Schumer Is Actually The Other Kardashian Sister You Never Knew About
By Jake Viswanath
Sandra Bullock, Girlboss Extraordinaire
By Matt Harkins & Viviana Olen
Spice Girls’ Net Worth: The Richest Member Is Wealthier Than The Rest Combined
By Hugh McIntyre
Pete Davidson & Kate McKinnon Are Part Of A Reported Major SNL Cast Shakeup
By Brad Witter
Get Even More From Bustle — Sign Up For The Newsletter