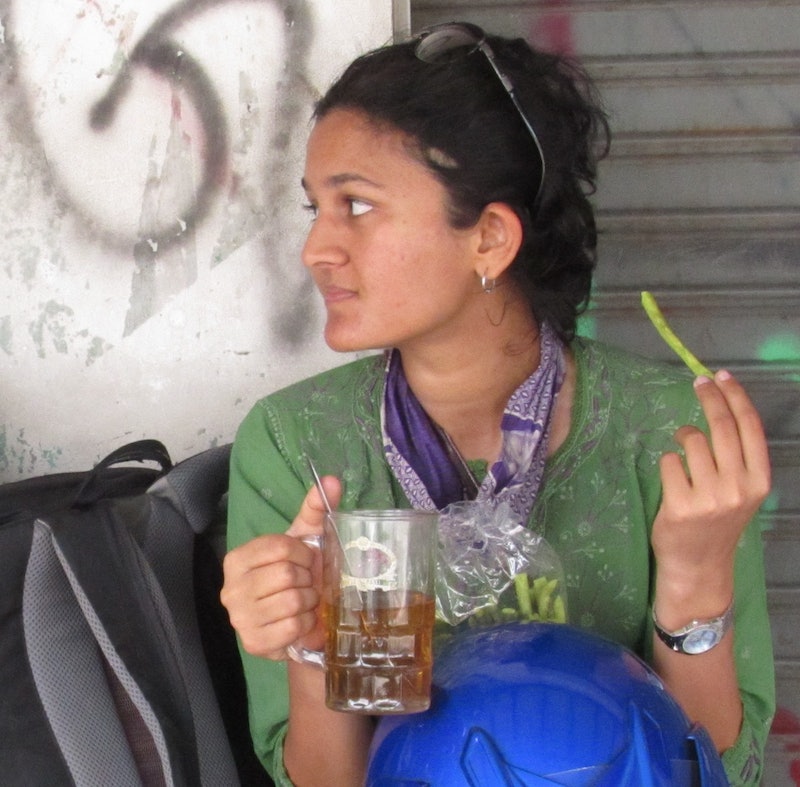 The first time I bought Mintop Forte was one year before I started losing my hair. The infamous hair loss treatment was on a shopping list which also included three strips of Finpecia tablets and one Dove Hair Fall Rescue conditioner, which I was picking up for a balding, male cousin of mine.

The pharmacist looked at me suspiciously, wondering what an able-bodied, clear-complexioned, 28-year-old female might want with a bottle of hair regenerating solution.

Twelve months after that encounter, I was back at the same pharmacy — this time as an able-bodied, clear-complexioned, 29-year-old female with a rapidly depleting scalp.

My hair loss started innocuously enough. First, the shower drain began to notice it. Then, my friends began to notice it. One day, my sister called out to me from the second-floor window of our Mumbai apartment as I waited to get into a car below. “I can see your bald patches,” she said.

Women are not "supposed" to lose their hair, so society is not prepared for it. Doctors were unable to effectively conclude why I was losing so much hair despite an excellent diet and a penchant for exercise — but I was put on a regimen of endless vitamins, for starters. Lotions and potions were also deployed in the attempt to bring my lush locks back. My prescription demanded an occult-like attitude toward ritual: three nightly pills, another weekly pill, a four-spray-a-day lotion, a dandruff-defeating weekly lotion, and the once-daily Mintop foam.

The day I returned from the doctor, I unsheathed the foam bottle from its glitzy, green box. The white lotion hissed and spat as it made contact with the air. It evanesced with the dull sound of escaping steam as I rubbed the prescribed half-cap-full onto the thinning regions of my head.

I had seen friends fuss and frenzy over receding hairlines and shining skulls, but one thing had distinguished them all — unlike me, every one of them had a Y chromosome.

They say if you want a child, you see children everywhere. I wanted hair — so when I was in Africa, I saw it everywhere.

There were afros and dreadlocks and cornrows and braids; there were straightened, would-be-afros, and blonde dreads and tiny curls and mammoth curls. There was dark brown and suede and dirty blonde and blonde-blonde and deep black and graying black. There was also a sea of bald heads — heads shaved out of will, but whose stems you could see were beacons of promise, not sad stumps of helplessness.

Then I started seeing hair in more unexpected places. On safari, I noted the carefully set apart, long, and firm hair-like stalks on elephant trunks. I noticed the lion’s mane — a big old shaggy outcrop of dirty, golden awesomeness. I started seeing hair in the landscapes; shaved cornfields, cornrows in vineyards, and the beginnings of an afro in mountain shrubbery.

I began maintaining a mental diary. Every morning I’d get up, toss off the blanket, check the time on my watch and then turn around to ascertain the night’s casualties on my pillow. On a good day, I’d find two, discretely-shed hairs. On a bad day, it could add up to more than 15.

I had seen friends fuss and frenzy over receding hairlines and shining skulls, but one thing had distinguished them all — unlike me, every one of them had a Y chromosome. One told me the word in Spanish for when your hair gradually starts to give way at the front, and the wretched bare scalp starts to gain ground: entradas, the entrances. I don’t know if there's a different word for when it happens to women.

A biology textbook I once used in school claimed that it was normal to lose up to 150 hairs a day — but it was hard to keep believing that bit of science in the face of my deepening crisis.

For two months, the Mintop hissed and spat every night, but still showed no sign of bringing back the luxurious plait I once had. The nightly battalion of pills needed more time to unleash their magic inside my blood.

A colleague looked at me skeptically when I complained of hair loss. “Really?” he asked. “Yes,” I said. “At certain angles, and under certain wind conditions.”

Meanwhile, my elaborate tricks to remain presentable in polite company at least helped me to maintain a convincing façade of full, follicular glory. The great cover-up enlisted for its daily operations clips, pins, hairbands, and hats. This fortified to some extent the hoax of my continuing membership to the hair-bearing club. A colleague looked at me skeptically when I complained of hair loss. “Really?” he asked. “Yes,” I said. “At certain angles, and under certain wind conditions.”

Some laughed at what seemed like an imagined non-problem. Another friend said “I told you so, this was a long time coming”. Others advised patience — this was going to be a long game.

My landlady — a 72-year-old Muslim woman who despite her devoutness chose not to cover her hair — had her own set of hair loss issues. I watched her every day as she briskly got on with life, aware of her large chunks of glistening scalp, but too cavalier to cover up what remained of her short hair. She told me she'd lost most of it in her fifties, but couldn’t be bothered to hide it.

One day, she came up behind me in the kitchen as I was using the toaster, tugged gently on my tufts, and sighed. “You have such wonderful hair,” she said. “I really envy you.”

I believed her for about an hour, until I reached home. It was just a really good cover-up job on my part, not any significant regeneration.

A few months ago, I returned to India. A follow-up visit to the dermatologist was an occasion for brief optimism. “I see density,” she said, peering deep into my head and furrowing her hand through the thinness. “Yes, definitely better.”

As dictated, the pills and lotions continue — though I have resigned from perpetual worrying. I continue to conduct daily probes on my scalp. To this I have added another, far more satisfying investigation — well-concealed probes into other young women’s scalps. A casual glance at the crown, a deep gaze at the back of an unsuspecting head. The investigations prove to be both revelatory and satisfactory — another outing for good old schadenfreude. I feel like I am ahead of the game; at least I’ve got my head in it early enough.

My anxiety is marginally tamed by the fact that my hair is growing out now, and longer hair means more thinness can be covered up. This past weekend, during my usual, daily investigation I noticed something else — four new silver strands. It was a sobering moment, a joyful moment. If my new hair is going white, that can only mean one thing: there just might be enough of it.

More like this
How To Master Baby Braids, According To TikTok
By Tomi Otekunrin
Coco & Eve’s Just Launched Its First Ever Leave-In Conditioner
By Tomi Otekunrin
2022's Top Wedding Hair & Makeup Looks, According To Pinterest
By Olivia Rose Ferreiro
14 Hair Color Trends You’re Going To See Everywhere This Summer
By Danielle Sinay
Get Even More From Bustle — Sign Up For The Newsletter