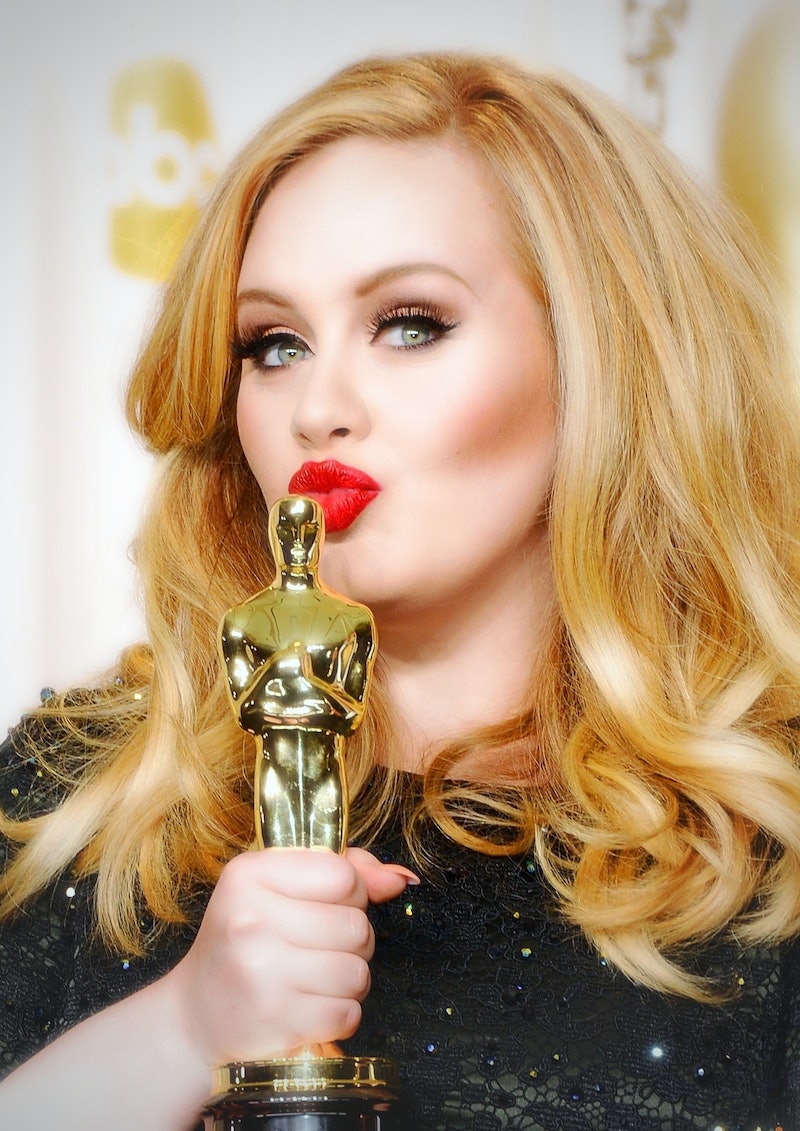 Finally, the day has come: Adele has new music for our ears to feast upon. The Grammy- and Oscar-winning singer teased her new album during a commercial break of The X Factor on U.K. TV on Sunday, and as she sang the touching lyrics, the words flashed on the screen. So clearly, a full analysis of these new Adele song lyrics is definitely needed. Like all lyrics, the words to this new song could be interpreted many ways — did she pick these particular ones because it sounds like she's saying "Hello" to the audience as well? Did she know we'd all be freaking out over this small 20 seconds of her voice? Even if that's the case, this new song — the title of which is not known yet — matches the heartbreak, passion, and conviction of the music Adele's fans have come to love her for, and frequent collaborator Ryan Tedder confirmed on Twitter that the voice is hers.

This is the first new music Adele fans have heard from the singer since her hit James Bond theme song "Skyfall" in 2012. She won all the awards for the song she sang for the Bond movie of the same name — including the Academy Award for Best Original Song. And then, she basically disappeared. Small rumblings of a new album were heard here and there, and the radio still occasionally played her hits from her breakout album 21 — "Someone Like You," "Rolling in Deep," and "Rumor Has It" to name a few — but that was it. Eventually, there was confirmation that a new Adele album was expected to be released on November 20, and now, finally, that date is coming up. It's just in time for cozying up with some hot cocoa to listen (over and over again) to the British crooner sing her heart out on the long-awaited, as-of-yet untitled album. This preview of a new song is the latest news on that record, and the biggest glimpse at Adele's new sound that fans have heard so far.

So, obviously, it's time to obsess over the small nugget of new music we do have. It's gorgeous. It's emotional. It's Adele.

You can hear the maturity in her voice, a woman who has grown since her heartbreak in the songs of 21. Just check out these new lyrics:

I was wondering if after all these years

They say that time's supposed to heal ya

but I ain't done much healing

It's almost like she's singing directly to the fans, saying, "I hope you still remember me." Of course, we do! But that's a fantasy. This new song sounds like Adele is calling up a former love or loved one, who she hasn't heard from for awhile and wants to see. "It's me" denotes there's a former closeness there, but it's distant, so there's some doubt, which is why she introduces herself. The next line — "you'd like to meet to go over everything" — is phrased in such a distant and business-like manner, making me think that this isn't a usual return-my-stuff kind of breakup call. It sounds like there's something deeper here. But the real gut punch comes in the final two lines: "They say that time's supposed to heal ya / but I ain't done much healing." Something went down between these two people, and Adele states here that she hasn't forgotten the past.

It shouldn't be any surprise that Adele is at her best when she's going for the emotional gut punch. Her 2011 album 21 chronicled her heartbreak from a failed relationship, and her ubiquitous hit song "Someone Like You" talked about confronting an old lover who moved on — but she hadn't. "I had hoped you'd see my face and that you'd be reminded / That for me it isn't over," she sings on the track, which went five-times platinum in the United States. In a lot of ways, this new song, or at least what's been revealed from it, is lyrically like "Someone Like You." Both songs have a request by Adele to see a former love she hasn't seen in a long time, and both have an admission that she is still dealing with the pain.