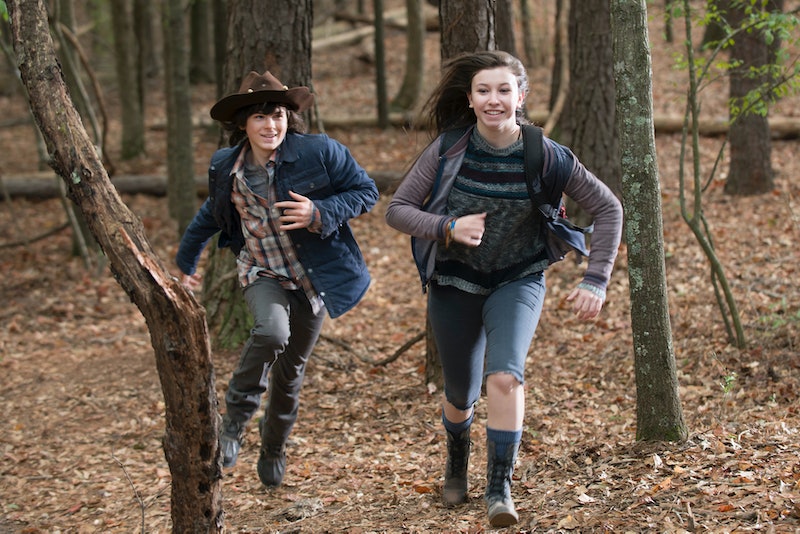 Once you're done hugging the turtles in your life, let's talk about Enid on The Walking Dead. Sunday's episode began with a flashback that explained how the mopey teen got to the Alexandria Safe-Zone, where we met her in Season 5. After her parents were eaten by Walkers, she was on her own, and Enid wrote "JSS" on everything from a car window to some turtle bones and her own hand. We learned later, by a note that Enid left Carl, that the letters "JSS" stand for "just survive somehow."

On Talking Dead, actress Katelyn Nacon said she believes "just survive somehow" to be a motto that Enid's parents taught her, which she has now internalized and clung to while on her own. At the end of the episode, she left Carl and possibly the Alexandria Safe-Zone entirely. Well, maybe not. She is kind of the Hagrid of this walled community with that intense ring of keys.

Also, I guess Enid and Ron are broken up now. This wasn't a good day for Jessie's older son, was it? It started with his mom trying to give him a haircut, and ended with two people committing murder to save his hipster hide. Does he know something about Enid, or is he just bummed that Carl is so much cooler?

She may have left the community, but Enid still could be hiding some secrets. Is she a Wolf, or just a girl who learned how to take care of herself and trusts no one? She has said things to Carl that eerily mirrored the Wolves' "we're not supposed to be here" philosophy. Did she leave to rejoin them? Honestly, I don't think so. I think she's smart and knows that nobody in Alexandria can take of her better than herself. Who knows? Maybe she just left to unlock some weapons. Leaving that message for Carl was a deeply personal thing to do, so I want to trust Enid if we see her again on The Walking Dead.

More like this
What’s New On Netflix: A Victoria Justice Rom-Com & The Return Of David Letterman
By Arya Roshanian
Will Vampire In The Garden Get A Season 2? What To Know
By Kadin Burnett
'Bridgerton' Season 4 Will Likely Focus On This Brother's Divided Heart
By Grace Wehniainen and Alyssa Lapid
The Good Doctor Already Added 2 New Cast Members For Season 6
By Brad Witter
Get Even More From Bustle — Sign Up For The Newsletter