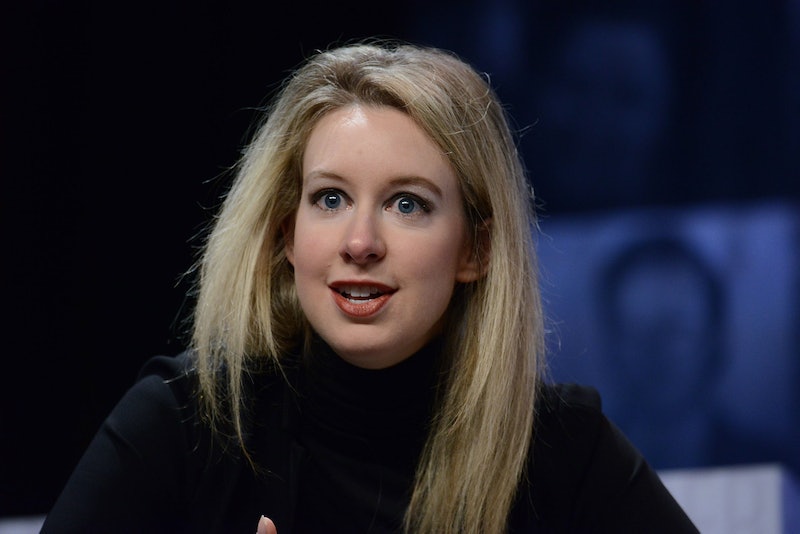 This week, Theranos, a medical innovations company valued at around $9 billion, has come under fire after a Wall Street Journal investigation apparently revealed that the company may not be living up to its explosive hype. Why does this matter? Because Theranos is headed by Elizabeth Holmes, one of the few female billionaire tech innovators in the world, and some of the criticisms may have had a worrying emphasis on her gender. But calling the crisis a sexist scandal isn't the right response — or at least, not quite. Holmes' company deserves to be treated with the same scrutiny as any other start-up, and that includes criticism. But the fixation on Holmes herself, particularly on her physical appearance and aggression, is definitely an example of a nasty truth: Even in scandal, women aren't treated equally.

Theranos, if you're not up on your business news, is Holmes' brainchild, and it's been one of the most-hyped productions in recent medical history. Holmes dropped out of Stanford in her sophomore year to found the company, which is based around a new set of technologies that can apparently produce the same test results from a tiny pinprick of blood as old tests involving entire test tubes of the stuff. It's meant to revolutionize and cheapen medical diagnosis, and Theranos testing centers have opened in Walgreens across Phoenix, plus two in California.

The idea was pretty compelling — enough for Holmes to raise more than $9 billion in venture capital from professional investors and become the youngest self-made female billionaire in the world. But The Wall Street Journal's expose, which relies on ex-employees and insider whistleblowers, alleges that the company's actually not doing what it claims to. And the results have dragged up a lot of nasty sentiments about Holmes herself.

There are two parts to this issue, and one is pretty clear. If you're going to run a company that promises giant scientific results, then whether you're a man or a woman, you need to demonstrate what the results actually are and where they come from. The Wall Street Journal particularly focused on the fact that Theranos hadn't had results from their biggest innovation, the Edison machine (the device which can supposedly draw readings from a tiny amount of blood), peer-reviewed or publicly tested. When questioned by The Wall Street Journal, Theranos maintained that such pieces of information were "trade secrets."

Add to that a raft of other problems alleged in the article, and further revelations elsewhere — including a former Microsoft CEO's reveal that his own Theranos tests had seemed weirdly, wildly inaccurate — and you've got many good reasons to demand answers. As WIRED pointed out in their piece on the scandal, Theranos' secretiveness may actually endanger lives.

Theranos deserves the exact same scrutiny as any other company in its position. To be taken seriously, it needs to be taken to task. Fairness means equality; not "give a woman an easier ride."

Theranos has come out fighting. They've said in a statement that the whole Wall Street Journal article is “factually and scientifically erroneous and grounded in baseless assertions," using "disgruntled former employees" as sources, and that the journalist had "declined an opportunity” to see how the Edison worked. But they haven't addressed any of the murmurs in comments sections that Theranos is being targeted because it's being run by a prominent woman. And they shouldn't, because Theranos deserves the exact same scrutiny as any other company in its position. To be taken seriously, it needs to be taken to task. Fairness means equality; not "give a woman an easier ride."

Holmes is not an innocent waif. She is in charge of $9 billion of capital and a company competing with seriously established blood testing around the world. To suggest that we should go easy on her or her company, even if they don't live up to normal standards, would not be doing the scientific world any justice at all.

It's the way Holmes herself is covered by the media that's a bit more worrying. A few things strike the casual reader in wading through reports of Theranos' alleged difficulties in the press. One is that everybody else engaged in the company at a high level is a man. The other is that reporters seem incredibly invested in the fact that Elizabeth Holmes likes black turtlenecks.

The inference for start-up and Silicon Valley virgins is that she's branding herself as Steve Jobs, the most famous black-turtleneck-wearer in history. And they do not lose a chance to let us know it. The Wall Street Journal's takedown sketches her with the following: "The 31-year-old Ms. Holmes’s bold talk and black turtlenecks draw comparisons to Apple Inc. cofounder Steve Jobs." "Holmes took to wearing Steve Jobsian black turtlenecks," The New Yorker tells us this week. "Most have assumed that Holmes's sartorial choice is an eerie, if not presumptuous, homage to Jobs," an Inc profile noted this month.

And it's not new. "Steve Jobs ... is obviously a hero to her," Fortune said in a section of a profile in 2014. And she gives a lecture "wearing her trademark Steve Job-esque black turtleneck," according to Stanford Business back in February. This emphasis is a real problem — and not for the reason you may think.

First of all, the focus on Holmes's sartorial habits (girls like fashion, amiright?) seems a little suspect. But it could be excused. After all, there's a lot of personal branding in the leadership of powerful, innovative companies. Bill Gates has been aggressively uncool — V-neck jumper, checked shirt, chinos — for decades now. Satya Nadella, Microsoft's current CEO, often appears onstage in T-shirts or round-collar sweaters. You can predict Marc Zuckerberg's attire — T-shirt and hoodie — down to the nearest decimal point. Looks matter; they're part of the modern picture of a visionary.

But the idea that Holmes is modelling herself after one of the biggest heroes of hyper-masculine Silicon Valley by donning his signature top appears to be garnering her more ridicule than what seems reasonable. Particularly since, in an article for Glamour in March 2015, she insists, "My mom had me in black turtlenecks when I was, like, eight. I probably have 150 of these. My uniform." The key to understanding why this is a problem is what Inc. chose as their adjective for the habit in their profile: "presumptuous." How dare a 31-year-old woman dress like a legendary male icon of tech. How superficial of her. Doesn't she know her place?

Holmes, in dressing in "Steve Jobs'" turtlenecks and pushing vocally for his same heights, is out of line. And everybody is letting her know it.

I'm wary of this because I can read the inferences. An ambitious, assertive woman is still a dangerous one. Consider Jennifer Lawrence's essay last week on how annoyed she is at having to be "likable" rather than push for results. Holmes, in dressing in "Steve Jobs'" turtlenecks and pushing vocally for his same heights, is out of line. And everybody is letting her know it.

And it gets worse. This week, Forbes sneered that she is a "photogenic Stanford dropout." She's gone from their "youngest self-made woman billionaire" to somebody who needs to "stop complaining," according to a new Forbes headline today. (Couldn't a copy editor have pointed out how weirdly misogynist that sounds in context?) From lauding her for brilliance and innovation, the tables have turned, and she's now a ranting "borderline messianic" lunatic (that description is from Vanity Fair Friday). Is this part of the natural journalistic love of a backlash, of puncturing the figure who's just too perfect to be true? Or does it have a nasty undercurrent of sexist putdowns?

The scandal's still unfolding, and Theranos and Holmes still have a lot of questions to answer about the efficiency of their technology. But it would be great if journalists stopped subtly poking fun at her Jobs-ian ambition and focused on whether the edifice she's building is what it says it is. The success of her venture is not going to be remotely threatened by the serious depth of her ambition or her choice of work wear, and to pretend it does is to do the crisis at Theranos a distracting disservice.

More like this
Sandra Bullock, Girlboss Extraordinaire
By Matt Harkins & Viviana Olen
What Is “Night Luxe?” Breaking Down TikTok’s New Aesthetic
By Courtney Young
The Case For A Hard Launch Summer
By Morgan Sullivan
TikTok Is Using A ‘Love Island’ Sound To Expose Their Weird Crushes
By Courtney Young
Get Even More From Bustle — Sign Up For The Newsletter