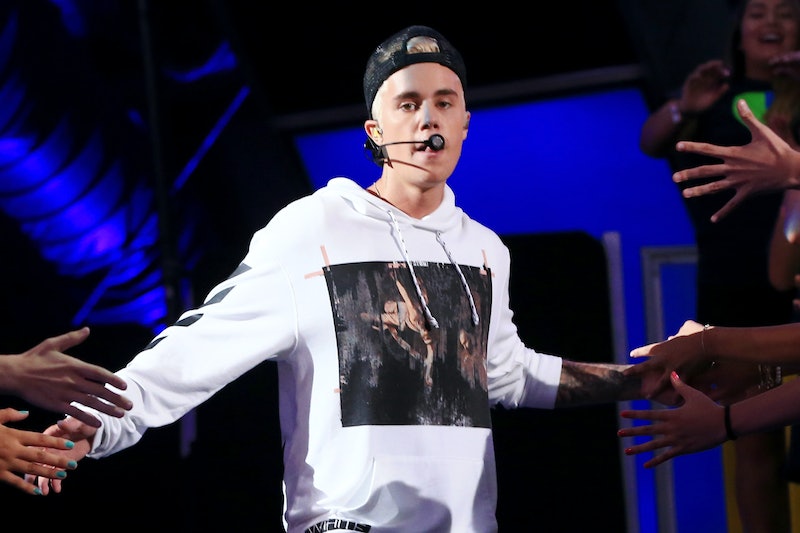 Unfortunately, the intense violation of someone taking nude photos of you without your consent is a universal thing — something that Justin Bieber was forced to discover when a paparazzo took photos of Bieber swimming naked in Bora Bora, because, you know, that's totally OK. (I hope you can feel the heavy weight of my sarcasm here.) The pictures made their way around the Internet on Wednesday, resulting in a series of inappropriate reactions such as people actually going out of their way to locate these photos and people trending "What Do You Peen" on Twitter. However, during an interview with Access Hollywood that will air on Monday, Bieber reacted to the nude photos, and his reaction was a very mature one.

"My first thing was like… how can they do this? Like, I feel super violated," the pop star said. "Like, I feel like I can't step outside and feel like I can go outside naked. Like, you should feel comfortable in your own space… especially that far away." However, he did also take the time to joke, "That was shrinkage for me." Bieber's reaction wasn't anything that we weren't expecting; of course he would feel violated to have someone take pictures of his nude body without his consent and then publicize them while he's simply having a good time on his vacation. It's not unlike when a paparazzo took photos of Kate Middleton while she was sunbathing topless at Château d'Autet; that was only three years ago, and it seems that photographers worldwide have still not learned their lesson.

I understand why Bieber finally commented on the entire business. He had his privacy, and his body, violated and, while he has already sent a cease-and-desist letter, using his own words to take control of the narrative is his right as the victim in this situation. No one could have, or should have, forced Bieber to open up about the entire situation before he was ready to, because he's already been pushed into this situation and shouldn't be pushed any further. But now that he has finally chosen to speak, his words are very powerful. The fact that he didn't say anything that we couldn't have already figured out, and tied it off with a joke, says a lot to me.

It says that, despite this horrific violation, Bieber refuses to be a victim. He's taken steps toward stopping the distribution of the images, and there's no need for him to add further insight into this situation. What insight is there to add? He refuses to let anyone feel like he is at all to blame in this situation, and he is lessening the sting of the transgression with humor — almost as if to say that these photos have absolutely no power over him. And that's really admirable, especially considering how hard Bieber has worked in the past year to reclaim his musical career and live up to the role model lens through which his fans have seen him.

It shows that he is growing up, and, while there is no single right way to respond to a violation of this magnitude, Bieber's reaction was incredibly mature and incredibly admirable.