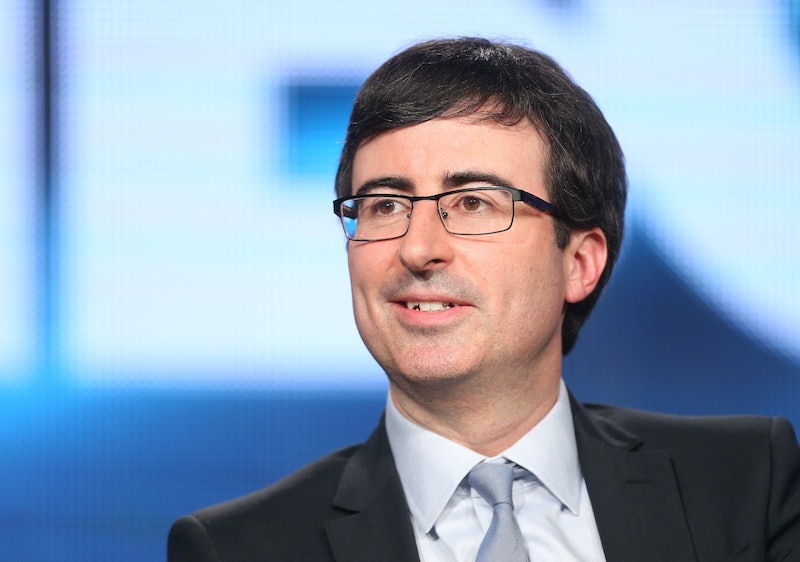 Teaching history has never been an easy task for anyone in academia. It's the meatloaf of school subjects — teachers often have to dress it up as something more fun in order to get kids to consume it. But what's far more grave than the struggle to absorb all those names and dates is the systematic dumbing-down and omission of crucial events that might make America look a little less like the shiny superpower that it is. Fortunately for our younger generations, that all changed about a year and a half ago, when John Oliver came onto the scene with his show, Last Week Tonight. He showed the country that you can present accurate, relevant history and make it hilariously entertaining. And for that, John Oliver might be the best U.S. history teacher, well, in history.

Each week, Oliver centers his episode on a relevant issue that is in dire need of some public scrutiny. Oftentimes, these issues are not exactly topical, but are important nonetheless. For example, the lack of voting rights in U.S. territories or the many ways in which Big Pharma is corrupt. These are not issues that the public normally ever think about because they're not splashed across headlines on a regular basis, but as Oliver delves into them, giving us comprehensive background and revealing the very real effects these issues have on people, the public perception quickly shifts.

Oliver might feed us knowledge like it's entertainment (candy), not education (meatloaf), but the quality of his lessons rivals the best university U.S. history course. If you're not familiar with his teaching style, then here are eight specific reasons why U.S. schools should maybe just play Last Week Tonight in place of an actual history class.

He Can Get Even The Most Apathetic People To Tune In

According to Deadline, the first season of Last Week Tonight attracted an average gross audience of 4 million people. Chances are, a large portion of those viewers are not history nerds, or even close. That's because many viewers, especially those who were already fans of Oliver from his Daily Show days, tune in just to see him and laugh at his jokes, and are incidentally getting lessons in U.S. history. Teachers who struggle to get their students to pay attention in class should take note.

He Highlights Issues Most Textbooks Would Ignore

Oliver covers topics that schools don't, topics that every student — and every American — should be aware of to some degree. Besides the abysmal lack of rights for Americans living in U.S. territories, Oliver has also revealed the similarly flawed voting system for D.C. residents and the country's terrifyingly unsound infrastructure. If it weren't for Oliver, the average American might have never learned that the chicken industry is as cutthroat as Wall Street.

His Lessons Are Factually Sound

He might not have a Ph.D. in American history — and he might be a British comedian — but Oliver's lessons are solid. He makes sure to use official documents, case studies, and established documentaries to back up his arguments.

Perhaps Oliver's strongest suit is his ability to take a very complicated issue, like net neutrality, and break it down so that the average viewer can understand it plainly without dumbing down the information. There was no better evidence of this than when he made the NSA's mass surveillance an issue that everyone can relate to by asking Edward Snowden to explain each program with one criterion: "Can they see my dick?"

He's Not Afraid To Reveal The Ugly Truth

Oliver once referred to American history as "the thing that Disney's Pocahontas improved on." That's because U.S. textbooks are known to sugarcoat certain events (Thanksgiving, anyone?) and omit large parts of history that don't flatter the American image, but Oliver makes it his mission to put the country in the hot seat — how else can we expect reform to happen?

His Lessons Are Socially Conscious

And speaking of reform, Oliver's segments often have an agenda for doing social good. From going after Big Tobacco and actually implementing his own anti-smoking campaign to exposing the stringent bail system for nonviolent offenders and prompting Mayor Bill de Blasio to make adjustments for New York City, some of Oliver's segments have inspired actual change.

I don't know about you, but I can't trust a history teacher who's not pro-women. Time and again, Oliver has proved that he is a champion for gender equality, from his segment on America's lack of paid maternity leave to his searing look at online harassment.

He Has Succeeded In Making History Fun

At the end of the day, what makes Last Week Tonight so successful is Oliver's inimitable brand of humor. His seemingly endless analogies ("student debt is like HPV," "sex is like boxing," "paid paternity is like having hockey on in the background," and so on) are hysterical but always astute. And there's perhaps nothing better on television than when Oliver pulls out the stops, making up songs, producing fake blockbuster trailers packed with celebrity cameos, and who can forget when he enlisted the help of Michael Bolton to compare the I.R.S. to America's anus? As silly as that was, we all appreciate the agency a little more now, am I right?