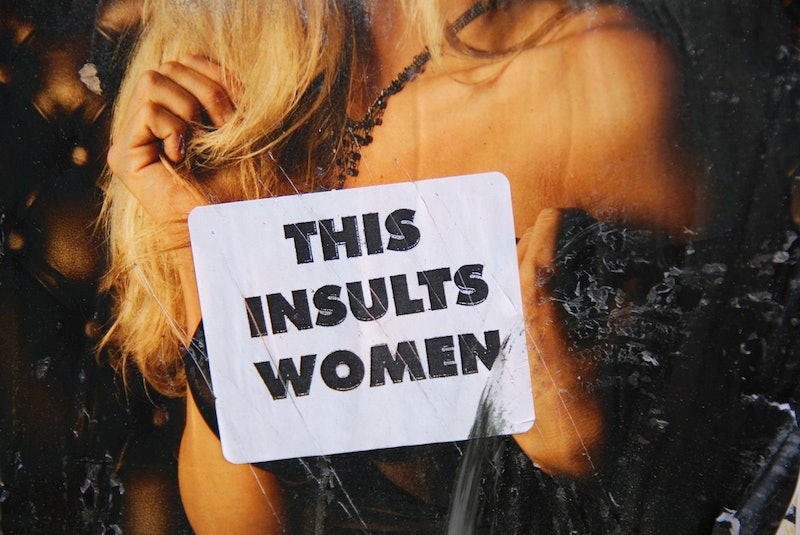 Barring the Ermagerd girl or cat videos, few Internet sensations can come close to the viral reverence devoted to '90s nostalgia online. I'll be the first to admit I happily delve into that glorious decade at the drop of a hat, because it was awesome. Well, mostly — a cursory glance at sexist moments from the '90s proves that we've been guilty of glossing over some pretty offensive stuff, from music to movies and everything in between.

While it's tempting to live forever in that corner of our mind which celebrates '90s feminist TV icons like Boy Meets World 's Topanga Lawrence and rocks out to chick anthems like the riot grrrl we both know you are inside, it's important to look at the '90s through a more objective lens so that we can make a mental note of the the issues we've improved upon as a society and the issues that, well, we should take issue with still. At the time, the following five moments seemed harmless enough. Funny even! Some we blasted our radios to and sang right along. Looking back now, though, we filter these moments through our mind's eye differently. Don't believe me? Check 'em out for yourself but, in full disclosure, your childhood may never look the same.

Where do I even start with this one? From the get-go, this 1995 Levi's 501 Jeans commercial creeped me out — thanks in large part to the eerie claymation characters. But, above and beyond that strange creative decision on the part of its producers, the spot implied that women are hysterical creatures who must be saved in a crisis. Oh, P.S., if you need to calm a woman down, just flash her your junk. Lewd and lascivious behavior will not only mesmerize her into compliance, but it will furthermore inspire her to jump your ones mere minutes after you rescue her. Because, women.

In a 1997 article for the Harvard Crimson, then-student Tomas Cotton warned women they would regret no-fault divorce, because it simply opened the door for their husbands to go out and snag themselves a new trophy wife. Cotton made this argument in opposition to feminists who asserted no-fault divorce was a "large hurdle on the path to female liberation." Women finally being able to get out of a marriage if they wanted to without having to physically prove they were being abused, cheated on, etc. was a huge milestone, so painting it as something to regret... well, let's just say that it wasn't so good. These remarks would land Cotton in hot water during his bid for Senate in 2014, although he did defeat incumbent U.S. Senator Mark Pryor in the general election.

It's unfortunate that this kind of rhetoric has a long history both before and after the '90s. Today, men in politics still consider the rights of women to be a platform to be voted upon.

3. Sublime Made Us All Sing Along to Sexism

Once, in what was perhaps my millionth time hearing "Santeria" by Sublime, I caught myself singing the lyrics. C'mon... you know the words. I don't practice Santeria/I ain't got no crystal ball/I had a million dollars but I, I spent it all/If I could find that Heina and that Sancho that she's found/I'd pop a cap in Sancho, and I'd slap her dooooooooown. Oh. Yep, he definitely is a jealous ex-boyfriend who treats his girlfriend like property, wants to murder her new boyfriend, and — for good measure — he'd like to knock around his former lover. My high school memories are forever tainted.

If we take a closer look at one of the '90s biggest movie mega-hits, Varsity Blues, it becomes painfully evident the film dealt largely in cliched typecasting of womankind. Take, for instance, the four main (and really only) women featured in the film: Julie Harbor (Amy Smart), Darcy Sears (Ali Larter), Mrs. Moxon (Jill Parker Jones) and Miss Davis (Tonie Perensky). So, we've got Julie, the "smart" girl who dresses casually and is the quote-unquote girl next door. In juxtaposition, there is Darcy, the beautiful blonde sexpot who tries to steal Julie's boyfriend because she realizes that her only ticket out of this town is via a man. There's Mrs. Moxon, the mother, and Miss Davis, the unmarried older sex-ed teacher by day and stripper by night. Because what else would an older, single, sexually liberated woman do? That about covers all the bases, right?